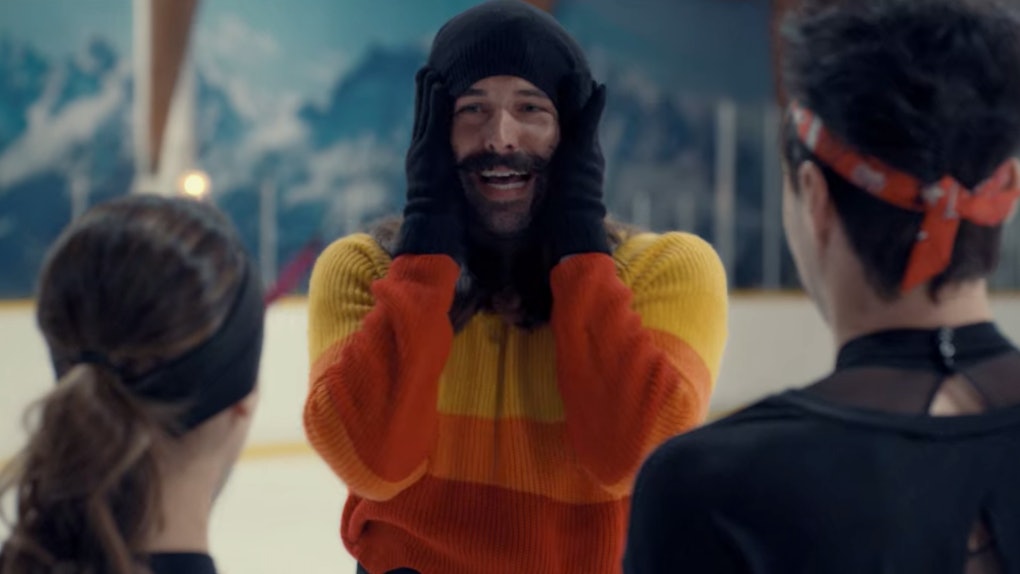 Every generation has its figure skating icons. In the '90s, there was Tonya Harding. The 2000s had Michelle Kwan. And now, there's Jonathan Van Ness. Sure, JVN might not have any Olympic medals, but the Queer Eye star has gone from curious spectator to bona fide figure skater in his own right, and his intense passion for the sport is documented all over social media, so fans know he's the real deal. Now, he's solidifying his status as an ice rink icon with a guest spot on Netflix's new skating drama series Spinning Out. Naturally, fans are loving seeing him do what he loves, and these tweets about Jonathan Van Ness in Spinning Out show it.

JVN rose to fame thanks to his talents as a hairdresser and self-care guru on Queer Eye, but his ice skating hobby has brought him this latest bit of attention. In the show, JVN plays a figure skating choreographer named Bruce, who begins working with the main characters' rival skating duo.

Van Ness' buoyant personality really shines through his instantly-lovable character, even though he is in cahoots with some of the "bad guys" of the series. In just one short scene, he gets to show off his skating skills, acting chops, and comedic timing, and fans really seemed to love every second of it.

Though the news Van Ness would be in the new show had been made public before its premiere, many fans apparently didn't know about the cameo. So, when the beloved Netflix star skated his way on camera, viewers had very strong reactions to the surprise.

Van Ness has been adorably enthusiastic about developing his skating skills, so fans are thrilled he had the opportunity to show off his hard work as a professional skater on the show. Considering one of JVN's specialties is gassing up others, it's a real treat to see others turning the tables and celebrating him.

You can catch JVN in Spinning Out Season 1, Episode 3, which is available on Netflix now.