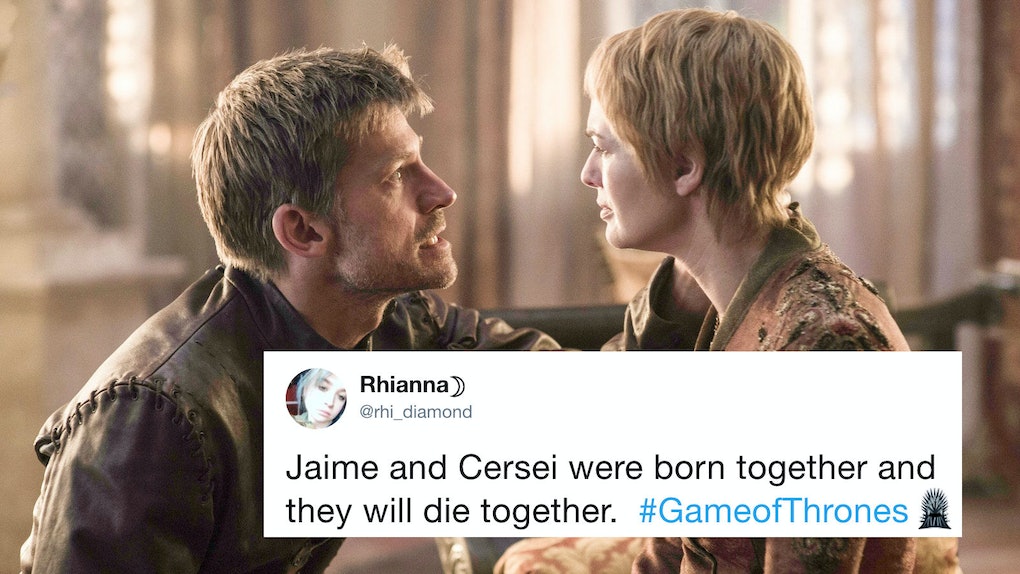 Game of Thrones has caused fans to cry so often over the unexpected and heartbreaking deaths of beloved characters, but on Sunday May 12's episode, it gifted fans the death that many have been waiting a long time for. Spoiler alert: This post contains spoilers from Game of Thrones Season 8 Episode 5. As many fans predicted headed into Sunday night's climactic King's Landing battle episode, Cersei Lannister wound up meeting her end, leaving the Iron Throne up for grabs. But sadly, her death also meant the death of her brother/lover, Jaime Lannister. Of course, Twitter exploded after the long-awaited scene, and these tweets about Jaime and Cersei's death show exactly how everyone was feeling about the Lannister twins' demise.

Up until Sunday night's new episode, Cersei Lannister had actually been mostly on the sidelines for all of the final season. That is because every main character except for her was up in Winterfell fighting off the White Walkers until this point, as Cersei had gone back on her offer to help out in order to instead build up her army for the fight for the throne. Cersei finally had her big moment at the end of last Sunday May 5's episode, when she refused to reason with Tyrion and signaled the beginning of battle by executing Missandei right in front of Daenerys.

As for Jaime Lannister, he actually had appeared to turn over a new leaf this season when he joined Winterfell's army to fight against the Night King rather than remain with his sister, and he even finally acted on his long flirtation with Brienne of Tarth. But unfortunately, he just could not stay away from Cersei any longer and fled back to King's Landing to try to protect her as Daenerys rained fire on the city.

In the end, Jaime managed to reach Cersei in the castle only after Daenerys' dragon, Drogon, had already all but reduced the entire city to rubble. With pretty much everyone else in the castle either dead or evacuated, Jaime reunited with Cersei in the map room and the two shared a tearful embrace. He then attempted to save his sister by leading her through the dragon pit, but the walls soon began to collapse. As Cersei decried the death of their unborn child, Jaime assured her that the only thing that matters is the two of them, and then we see the castle cave in on the incestuous lovers, killing them.

The climactic death scene was met with mixed responses on Twitter. Some fans were genuinely touched by the somewhat poetic ending of Jaime and Cersei dying together, while others decried the show romanticizing their toxic relationship by giving them a hyper-emotional death scene together. And still others felt cheated by the scene, since a fan-favorite prophecy from the series had many people predicting that Jaime would end up killing Cersei himself. Check out all the best responses to Cersei and Jaime's death scene below:

It looks like the Lannister twins' deaths are going to be another one of those controversial moments that Game of Thrones fans will be debating into the foreseeable future. But at least now Cersei is off the Iron Throne.