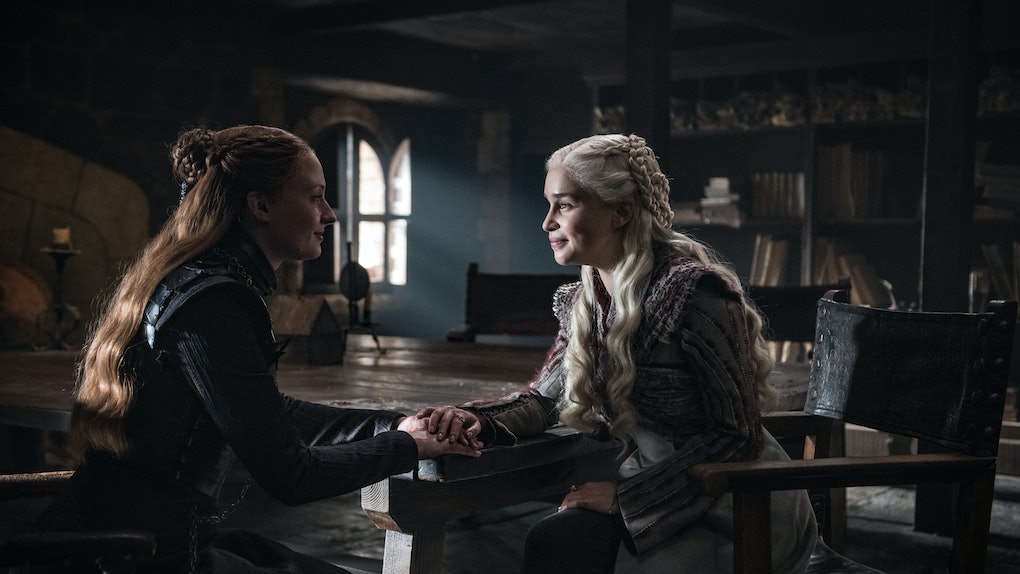 Is Sansa A Targaryen? This 'Game Of Thrones' Theory Would *Literally* Change Everything

Game of Thrones is known for its surprise twists that throw everything fan knew out the window. The books, being able to throw in more subtextual clues, hint at some of these reveals. For instance, Jon's real father is indicated far earlier on the page than in the show. That does sometimes lead to readers looking too deeply into the subtext and results in faulty theories, like Tyrion being a Targaryen. But now, fans have started reading too deeply into the show and coming up with wacky ideas. The latest: Is Sansa a Targaryen?

To be fair, this wasn't just pulled out of thin air, there is a minor detail that supports this notion. But it's not a plot point, and perhaps more importantly, it's not in the books. It's a show-only detail that isn't even part of the show. It's a detail in Season 1's opening credits.

Everyone loves the Game of Thrones opening credits. From the clockwork map to the astrolabe carvings to the shockingly singable theme song, the opening titles have been a fan favorite since the very beginning of the show. But the titles don't just show the lay of the Westeros land. Each actor is bullet-pointed with the sigil for their House.

In the official Season 1 credits, Sean Bean has the Stark Direwolf by his name, Mark Addy has the Baratheon Stag. But something then goes a little sideways. Sophie Turner, who plays Sansa has... a dragon? Check out the 28-second mark:

This might look like it's been some sort of crazy hint that's been sitting there before viewer's very eyes that no one noticed. However, it's not. Anyone who has read the books will tell you that Sansa is not just a Stark, she's a Tully at heart. The show has done some of this, giving actress Sophie Turner red hair and so on. However, in the books, Sansa being her mother's daughter is even more front and center, because of George R.R. Martin's love of showing people's heritage via their genetics. Gendry is an obvious Baratheon because of his dark-haired good looks, and Joffrey being nothing of the sort, because of his golden hair and blue eyes.

But because the people who put together the opening titles for Game of Thrones didn't understand the fandom and its obsessive nature, they didn't strictly follow the "actor to house" rule. Instead, the actors were allowed to pick their favorite sigils. Some stayed loyal to their characters, but some didn't, and no one thought it would matter very much.

If you watch the whole Season 1 opening credits video carefully, Turner isn't the only one who chose a different sigil than the House their character is assigned too. Emilia Clarke (House Targaryen) doesn't have the Dragon sigil by her name, she has the Lannister lion. I'm pretty sure everyone will agree Daenerys is not secretly a Lannister.

Moreover, as can be seen in the new credits, these discrepancies have been quietly fixed:

Sansa's been part of three houses: Lannister, Bolton, and Stark. But unless her third husband is a distant dragon relation, Targaryen will remain a bridge too far.