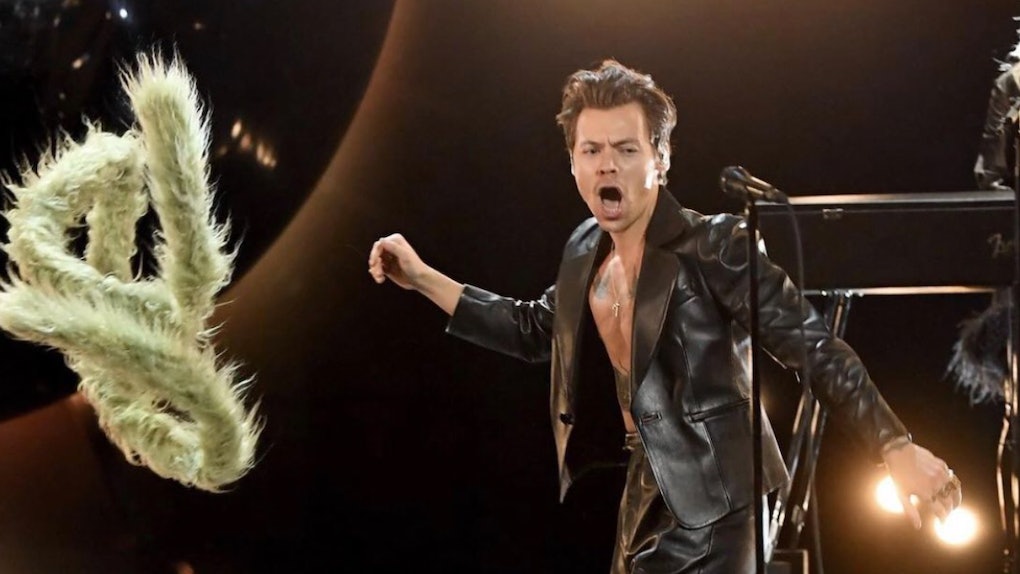 The 2021 Grammy Awards kicked off with a bang. On Sunday, March 14, Harry Styles opened up the prestigious ceremony with an unforgettable performance of "Watermelon Sugar." Considering he's been in the music industry for over a decade and this was not only his first time attending the Grammys but performing on the historic stage as well, fans couldn't be prouder. Let me tell you, he was so deserving of the opening slot because he sure knows how to get an audience hyped — and he definitely got fans hyped considering he did it all sans a shirt. The tweets about Harry Styles' shirtless 2021 Grammys performance are everything.

Styles had an incredible 2020, so no wonder he was nominated for Best Pop Solo Performance for "Watermelon Sugar," Best Pop Vocal Album for Fine Line, and Best Music Video for "Adore You." Fine Line instantly went No. 1 on the Billboard 200 after its release in December 2019, and "Watermelon Sugar" became Styles' first No. 1 hit in August 2020. "Adore You" also did well on the charts, seeing as it peaked at No. 6 that April. Its music video was praised for its visuals, unique storytelling, and interactive marketing campaign, so it was definitely a strong contender in its Grammys category.

Fans were so excited to see Styles performing "Watermelon Sugar," and he slayed every second of his hit song. With a full band behind him, Styles hit the stage in a leather suit and a massive feather boa. But by the end of the performance, he unbuttoned the suit and lost the boa — a choice that had everyone talking.

You can see a snippet of Styles' performance below.

Fans were (understandably) weak after witnessing the steamy performance. Hundreds of fans took to Twitter to gush over Styles' ensemble.

There was a lot of pressure on Styles to kick off the show on a high note, and it's safe to say he delivered.