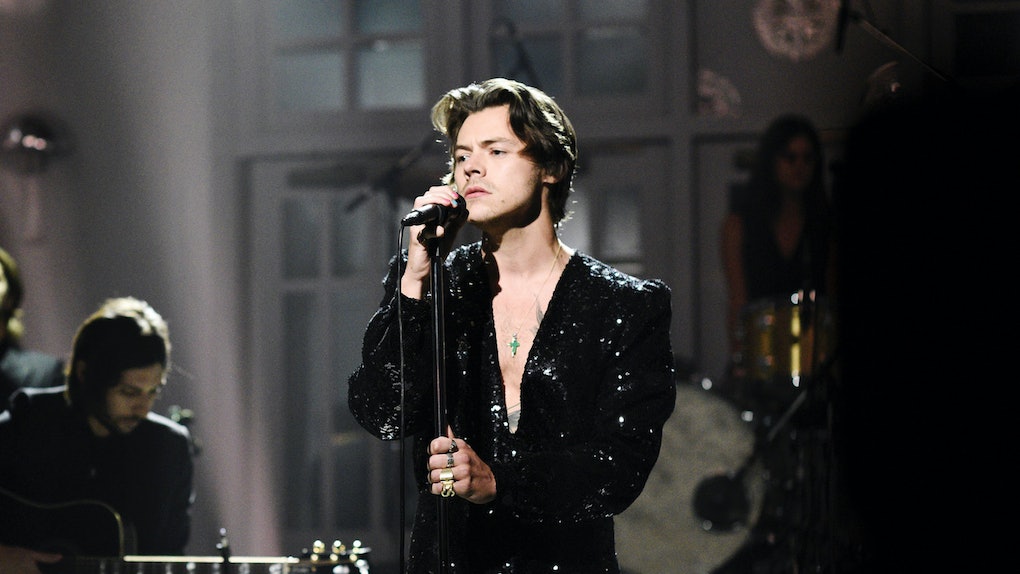 Ahead of the drop of his upcoming album Fine Line in December, Harry Styles gave fans yet another taste of his new sound on Saturday Night Live with a brand new track. Almost two months after debuting "Lights Up," Harry Styles’ “Watermelon Sugar” performance on SNL previewed a second song off of his sophomore album.

On Saturday, Nov. 16, the former One Direction star pulled double duty hosting and performing while on SNL. In addition to serving up plenty of quips and a memorable monologue, Styles gifted viewers a live debut of his song "Watermelon Sugar" after performing his October single "Light's Up."

Styles, who was introduced by Jon Hamm for his second performance of the night, wore a red suit and black tie as he took to the stage to sing about his "watermelon sugar high." Like "Light's Up," the single was a departure from his earlier tracks with more suggestive lyrics and a rock and roll sound, offering a glimpse at the singer's new musical direction for Fine Line.

Styles officially dropped "Watermelon Sugar" on all streaming platforms just moments ahead of his SNL performance.

Styles' Nov. 16 performance marks the second time that he's shown off his musical talents solo on Saturday Night Live since his One Direction days. He appeared with the group in 2012 and 2014, and then made his solo musical guest debut in 2017.

Marking his first SNL hosting gig, Styles gave a shoutout to his former 1D bandmates during the opening monologue. Calling the group his "brothers," he said "I love those guys" about Niall Horan, Liam Payne, and Louis Tomlinson, while substituting Zayn Malik's name for "Ringo" as a small joke about how he was the first to leave the group.

It's been a busy month for the British singer, who announced on Nov. 13 that he would be kicking off 2020 with a global tour titled Love On Tour. During the multi-month tour, which is set to kick off in the U.K. in April and come to North America after several stops in Europe, fans can expect to hear more tracks off his highly anticipated sophomore album, including "Lights Up." King Princess, who will be a musical guest for Saturday Night Live on Nov. 23, as well as Jenny Lewis and Koffee, will be opening for Styles during Love On Tour.

Styles previously told Rolling Stone in August that fans should expect a different subject matter and sound from his earlier work with Fine Line, saying, "It's all about having sex and feeling sad."

During an Oct. 31 interview with British radio network Capital FM, Styles told the station about the meaning of "Lights Up," saying, "For me, the song is about freedom. It's about self-reflection and self-discovery and just, like freedom. It feels like very free to me. A couple things that I've thought about and I guess wrestle with a little bit over the last couple years. It's kind of like just accepting all of those things. It's a very positive song to me."

From the sounds of his latest track, he'll be continuing the same theme throughout the whole album when it drops on Dec. 13. In the meantime, "Watermelon Sugar" is currently out, so fans can get a preview for Fine Line by giving it a listen.