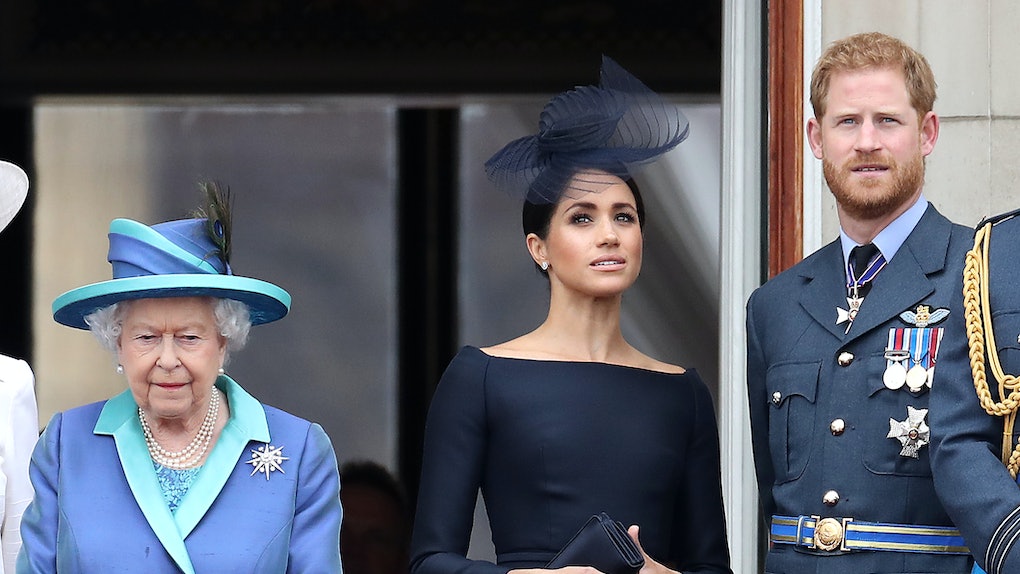 When news of the Sussex's tell-all interview with Oprah first broke, fans weren't sure what to expect. After all, CBS said the conversation with Meghan Markle would cover "everything from stepping into life as a Royal, marriage, motherhood, philanthropic work to how she is handling life under intense public pressure," as well as questions for Harry about his "future hopes and dreams for their expanding family." Well, I'm happy to report the interview didn't disappoint. After it aired on March 7, fans took to Twitter to share their thoughts, and these tweets about Prince Harry and Meghan Markle's Oprah interview truly sum up all the juiciness.

For some fans, the most compelling part of the interview was when the Duke and Duchess of Sussex discussed their recent pregnancy news. For others, Harry's quotes about Prince William really stole the show. And yes, plenty of tweets addressed the bombshell revelation that someone within the royal institution debated how dark baby Archie's skin would be. (Kensington Palace did not respond to Elite Daily's previous request for comment on Meghan and Harry's claims.) Now, viewers on Twitter are slamming the insidious racism and hypocrisy that forced Meghan and Harry to walk out the door.

One of the biggest bombshells from Meghan and Harry's interview came when Meghan revealed the Palace made the decision not to give Archie a royal title (not them) and, with that, refused to give him security protection, a choice that did not sit right with the couple. It certainly doesn't sit right with viewers on Twitter, either, with many expressing the belief that the decision was racist.

Others pointed out the numerous examples of double standards in the treatment of Meghan and Harry by the Palace, from whose reported misdeeds they choose to investigate, to whose security bills the Palace pays for and whose they don't. Many point directly to the Palace's decision to launch an investigation into two-years-old accusations Meghan bullied Palace aides while neglecting to look into serious allegations against Prince Andrew of sexual assault and his ties to convicted sex offender Jeffrey Epstein.

Others couldn't get over that the Palace, who has participated in numerous mental health awareness campaigns, would not let Meghan seek help when she was struggling with suicidal ideation.

In the end, many viewers believe the Palace's inability to embrace Meghan despite how well she did the job of a senior royal was a perfect display of how deeply rooted racism is in the institution.

More like this
These Tweets About Jimmy Fallon's TikTok Dance Follow-Up Segment All Say It's Too Little, Too Late
By Brandy Robidoux
These Tweets About Regé-Jean Page Leaving 'Bridgerton' Are Royal Bummers
By Cianna Garrison
These Tweets About BTS' "Film Out" Video Are Filled With So Many Questions & Theories
By Michele Mendez
Stay up to date