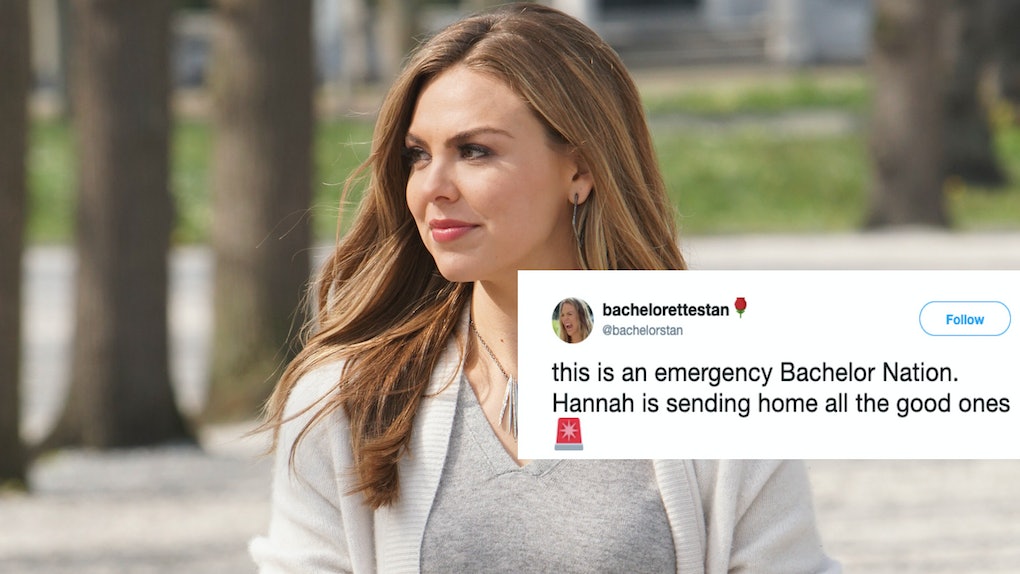 Fans of The Bachelorette know that only one guy can make it all the way to the end, but that doesn’t stop them from getting attached to the contestants anyway. One of this season's most prominent fan favorites has been the supportive, fun-loving Air Force veteran Mike Johnson, so when he was eliminated during a one-on-one date in the July 1 episode, it was a major blow for his avid supporters. These tweets about Hannah sending Mike home on The Bachelorette reveal just how crushed audiences were to see him go.

Mike's compassionate nature and charming, ear-to-ear smile captured hearts early on, and fans continued to fall for him as they got to know him more, especially after he opened up to Hannah about his ex-partner's miscarriage in Episode 3. At 31 years old, he established himself as one of the more mature contestants on the show, and even though he got into a few squabbles with drama-magnet Luke P., for the most part, Mike stayed in his lane on his journey to earn Hannah's heart.

But alas, Mike's time on the show is over. After revealing to Hannah that she could see her as his wife, Mike got the bad news: Hannah just was not sure about her future with him. And while Mike handled Hanna's rejection with grace and dignity, fans on Twitter couldn't contain their disappointment.

Even when Mike was totally crushed by the breakup, he still took care to comfort Hannah and commend her bravery in the decision. Tweets abounded claiming that Mike deserved better.

Fans are especially outraged that Luke P., of all people, lasted longer than Mike.

One of the main details viewers have learned about Mike from his time on The Bachelorette is that family is extremely important to him. Because his elimination happened right before hometown visits, this means fans just missed the chance to swoon over his interactions with his loved ones, and they're not happy about the lost opportunity.

But while Mike stans are clearly distraught about not seeing their fave's beaming face on their TVs every Monday night, many are unsurprised that he did not make it to the end with Hannah.

In fact, many viewers are using the elimination as more fuel for their hopes of Mike becoming the next Bachelor, a notion that started early on in the season and has been gaining momentum ever since.

Considering there are a few other fan favorites who are also prime Bachelor candidates (lookin' at you, Tyler C. and Pilot Pete), there's also a contingent wondering whether Mike will be another late addition to the Bachelor in Paradise cast instead.

Regardless of where Mike ends up, it's pretty clear that Bachelor Nation is hoping he gets another chance to find love.