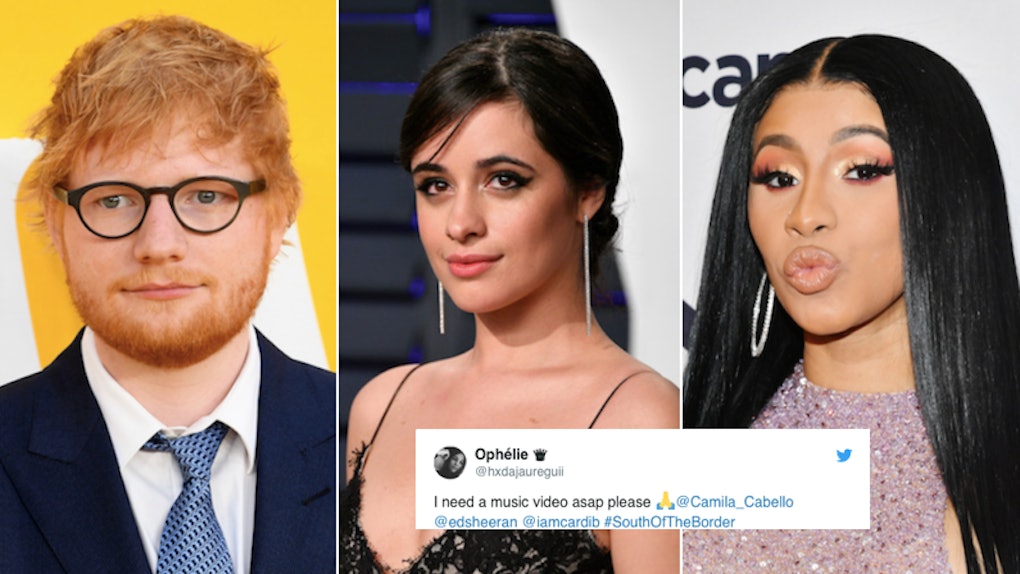 What do you get when you put Ed Sheeran, Camila Cabello, and Cardi B together on one track? One hell of a smoking hot summer. That's what. This unexpected but super exciting trio just dropped the instant hit "South of The Border," and their collective fanbase is losing it. Tweets about Ed Sheeran, Camila Cabello, and Cardi B's "South Of The Border" show this combination of artists is a listener's dream and that the song is somehow for everyone. Love to love it, guys! But fans do have one big question: Where the F$%# is the music video?

Frankly, it looks like Ed Sheeran has figured this whole guest-artist thing out. His album, called No. 6 Collaborations Project, includes stellar cameos from your favorite artists. Justin Bieber, Chance the Rapper, Travis Scott, 50 Cent, Skrillex, and Eminem are a few of the other heavy-hitters on this project, just to name a few. Sheeran released the tracklist on his Instagram feed on June 18. Respectfully, he tagged all collaborating artists in the caption, too. He wrote:

Thanks to all the amazing artists I’ve worked with on this record for sharing your talent with me. No.6 Collaborations Project comes out on July 12, hope you like it as much as I do @travisscott @thegr8khalid @camila_cabello @iamcardib @chancetherapper @pnbrock @stormzy @yebbasmith @justinbieber @eminem @50cent @thuggerthugger1 @theuglygram @ellamai @paulolondra @santandave @hermusicofficial @meekmill @artisthbtl @skrillex @brunomars @chrisstapleton

Right now, people can't get enough of Sheeran's work with Cardi B and Cabello. These two women are also not strangers to joint work. In fact, Cabello recently launching the sultry hit "Señorita" with Shawn Mendes and Cardi B is still chilling at the top of charts with collab songs like "Finesse" with Bruno Mars and (for better or worse) "Girls Like You" with Maroon 5.

Still, something tells me this new hybrid of Sheeran, Cabello, and Cardi B is bound to be a fast favorite.

First, listen to this jam:

Now read these tweets, my friend.

That kind of feedback ain't nothing. And fans are now clamoring to see the music video for this tune.

Meanwhile, all this hype closely rivals the applause Sheeran first got on his collaboration track "I Don't Care" with Justin Bieber. Naturally, Beliebers were all over that song since Bieber took such a long, long break away from the studio. (So in some respects, everyone can thank Sheeran for Bieb's big comeback. Thanks, Ed.)

The full No. 6 Collaborations Project album dropped on July 12 which means it's here just in time for your big summer bash, evening BBQs, or slew of pool parties. TBH, I'm ready to jump in that water and be free, which is why I'm currently working out my own "South Of The Border" choreography, and you should know that it definitely involves a body-roll and probably some synchronized clapping.

Keep your eyes on social media to see if my moves go as viral as this song.

More like this
These Tweets About Beyoncé On Netflix's 'Selena: The Series' Are Too Much
By Dylan Kickham
Is Olivia Rodrigo's "Good 4 U" About Joshua Bassett? Fans Are Convinced
By Michele Mendez
Here's How To Stream The 2021 Lotte Duty Free Concert, & Catch BTS & TWICE's Performances
By Michele Mendez
Stay up to date