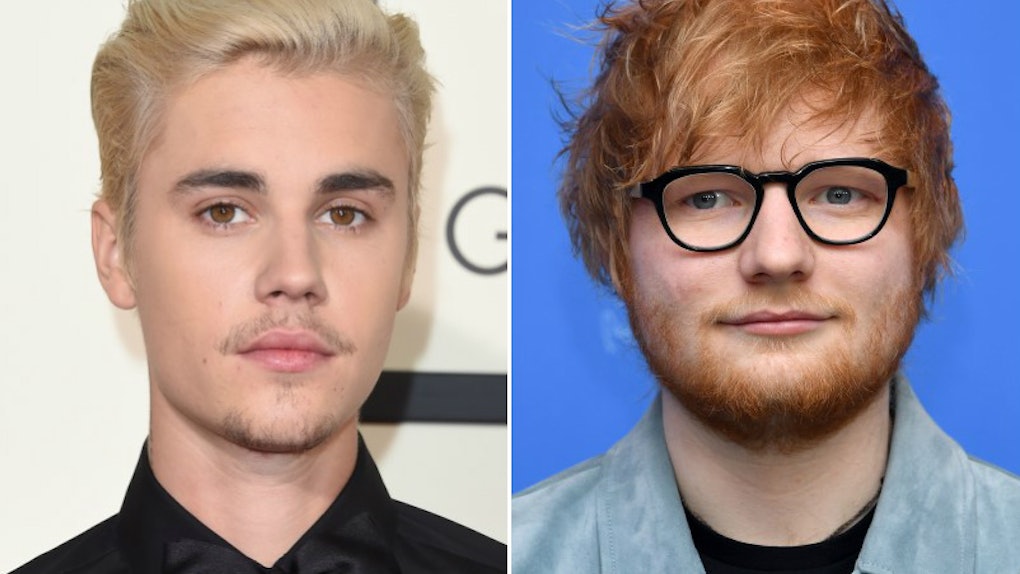 What would happen if Justin Bieber and Ed Sheeran came together to create more new music? Well, a collaboration between these superstars where they both actually sing on the track (unlike their last collaboration on "Love Yourself") finally happened, and it is beyond amazing. Ed Sheeran and Justin Bieber's "I Don't Care“ is truly incredible. And fans are literally going wild over it. I mean, two of most sweet-voiced men on the planet making beautiful music together is a fantastic thing. And the fact that this collaboration has finally happened is really shaking everyone to their core.

The song, “I Don't Care,” is all about someone who is at a party and really doesn't want to be there, but his significant other arriving and being there with them makes the whole experience worth it because they don't care abouyt anything else if they're with their bae.

It's the perfect message for Bieber and Sheeran to collaborate on. The song was released on May 10, after weeks of Sheeran and Bieber teasing fans on social media. This collaboration has been stirring up a lot of buzz since at least April 24 when Sheeran’s manager shared a photo of the singer standing in front of a green screen and smiling. His caption on the photo read, "This guy! Something is happening."

Naturally that made fans wonder what that really meant. So, they started digging around and found that Bieber had taken a similar photo. Fans even posted a comparison on Twitter to add to their theory that the Bieber and Sheeran photos were from the same shoot.

Here’s a look at the photo comparison:

As if that weren’t enough to make fans squeal with delight, Bieber himself posted the photos on Instagram on April 30:

So, he all but confirmed that it was the real deal! Now, finally, this epic collab is here! Listen to it below!

Given Bieber’s recent Instagram comments about not making music right now, it’s interesting that he’d collaborate with Sheeran. In a March 25 Instagram post, Bieber shared his thoughts on taking a break from music. Here’s what he said:

So I read a lot of messages saying you want an album .. I’ve toured my whole teenage life, and early 20s, I realized and as you guys probably saw I was unhappy last tour and I don’t deserve that and you don’t deserve that, you pay money to come and have a lively energetic fun light concert and I was unable emotionally to give you that near the end of the tour. I have been looking, seeking, trial and error as most of us do, I am now very focused on repairing some of the deep rooted issues that I have as most of us have, so that I don’t fall apart, so that I can sustain my marriage and be the father I want to be. Music is very important to me but Nothing comes before my family and my health. I will come with a kick ass album ASAP.

Lots of fans took all that to mean that he wouldn’t be making music right now. But since sharing that Instagram post, Bieber was featured on “Earth” by Lil Dicky and now this Ed Sheeran track. So, maybe a new album is coming sooner than everyone thinks.

As for Sheeran, he’s just trekking along as he always seem to do. He, of course, just helped write a track for BTS called “Make It Right” which is featured on their Map of the Soul: Persona album. All in all, it seems like both Bieber and Sheeran have their hands in quite a few projects. This collab is just the latest one!