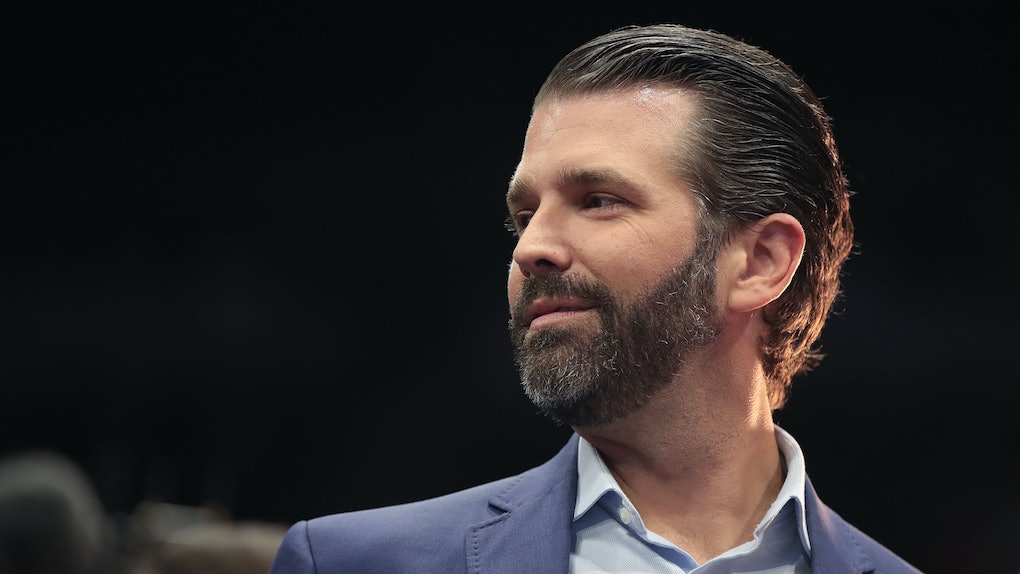 These Tweets About Don Jr. In The Mueller Report Are Calling Him Out

The time has finally arrived, everyone. On Thursday, April 18, a redacted version of Special Counsel Robert Mueller's report into the Trump campaign's possible collusion with Russian operatives during the 2016 presidential election became public. Even though the report concluded that there was no evidence that President Donald Trump had obstructed justice, these tweets about Don Jr. in the Mueller report has Twitter reeling.

Even though most people were scrolling through the report to see what Mueller found in regards to President Trump and his campaign team, there were some other familiar names mentioned that were too good to ignore. In Mueller's redacted report, the special counsel discussed President Trump's son, Donald Trump Jr., with regard to Trump Jr.'s reported interaction with WikiLeaks. On page 59 of Volume one, the report states, "Donald Trump Jr. had direct electronic communications with WikiLeaks during the campaign period." According to Mueller's findings, WikiLeaks and Trump Jr. reportedly exchanged multiple direct messages on Twitter, discussing a website titled PutinTrump.org as well as conspiracies involving former Democratic presidential candidate Hillary Clinton. Elite Daily reached out to the Trump Organization for comment on Don Jr.'s reported interaction with WikiLeaks, but did not hear back in time for publication.

Once Mueller's report became public, Twitter couldn't stop calling Don Jr. out for his reported interaction with WikiLeaks. Just take a look and see for yourself.

In addition to Don Jr.'s reported interaction with WikiLeaks, Mueller also discussed the June 9, 2016, Trump Tower meeting, which has been a subject of controversy. Initially in June 2016, Don Jr. released a statement claiming that the Trump Organization would be meeting with Russian associates to discuss an adoption program involving Russian children. However, it turns out that wasn't the case. In July 2017, The New York Times reported that the real purpose of the Trump Tower meeting was to gather dirt on Democratic opponent Clinton, which Trump confirmed through an Aug. 5, 2018 tweet. He wrote,

Fake News reporting, a complete fabrication, that I am concerned about the meeting my wonderful son, Donald, had in Trump Tower. This was a meeting to get information on an opponent, totally legal and done all the time in politics - and it went nowhere. I did not know about it!

Despite Trump's tweet, there are a few problems concerning the Trump Tower meeting. First of all, according to the Federal Elections Commission (FEC), it actually is illegal for political campaigns to receive help from any foreign governments, such as financial donations or anything of value. In the Trump campaign's case, that "value" involves possible dirt on an opponent, so it remains to be seen what might happen with that.

Even though there has been a lot of anticipation surrounding Mueller's redacted report, Don Jr. remains unbothered. On April 18, the day the report became public, the Trump Organization head called out the media and Democratic party by posting an... interesting tweet, to say the least. Trump Jr. posted a video of his kid playing golf, or more specifically, swinging and totally missing the ball on the tee, and he captioned it:

Live look at the media/Dems taking one more crack at the Hoax this morning.

Whose to say if Don Jr. has even glanced at the report, or even plans to. In the meantime, Twitter will be enjoying every minute of it.