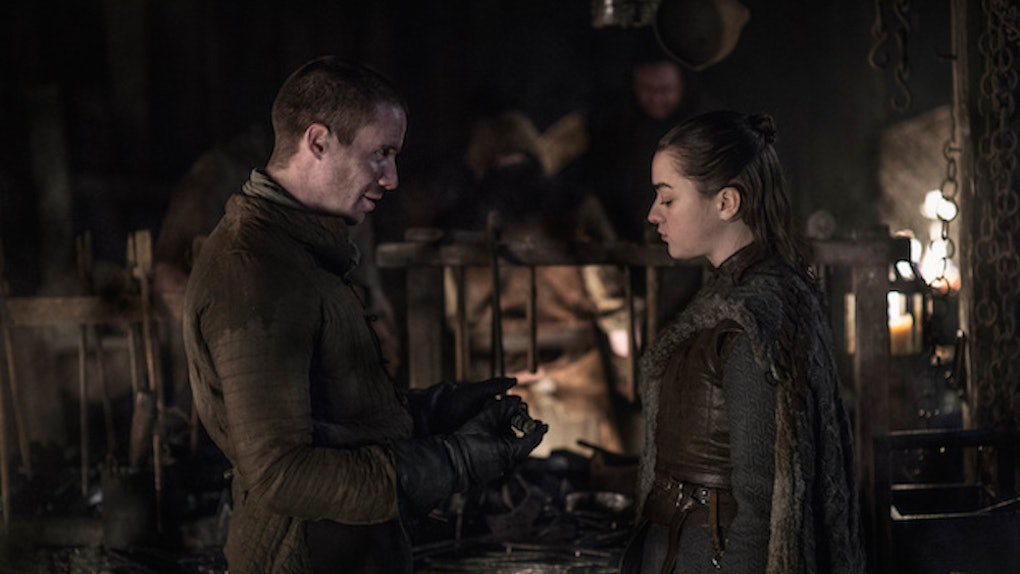 Hey, everyone! Kelli here. Just want to check in to see how everyone's feeling after WATCHING ARYA AND GENDRY ON GAME OF THRONES?! Because yeah, that happened. We all watched it. It happened. And none of us will ever be the same. Season 8, Episode 2 of Game of Thrones really gave fans a lot to freak out over. There was Bran's epic Jaime burn, lots of preparation for the White Walkers to arrive in Winterfell and F*ck Sh*t Up™, and of course, Arya and Gendry got down to business. And these tweets about Arya and Gendry's hook up on GOT show that no fan will ever be the same after this moment.

Arya fans already felt the sexual tension building between her and Gendry (Robert Baratheon's bastard son) during the season premiere. The flirting was apparent, to say the least. That flirting was cranked to the max when Gendry watched Arya practice her combat skills. That's when the ~sexy~ moment happened, and I literally cannot believe I'm writing about Arya Stark having sex right now. This show has really come a long way.

The moment happened when all of the show's characters currently residing in Winterfell were prepping for the encroaching White Walker army invasion. Arya had just had a moment with The Hound before she started practicing her archery (hitting the bullseye every time). Gendry is watching her in secret as she practices, and even before these two hooked up, people on Twitter were already tweeting about the sexual tension between them.

Then Gendry decided to make his presence known, bringing the dragon glass axe Arya requested he make with him. Arya asked him what the red woman wanted with him. (Remember, at this point she still doesn't know that Gendry's father is the late Robert Baratheon.) He reveals that she wanted his blood, and reveals his father's identity while he's at it, and that she put leaches all over his body to get said blood.

Then Arya asked if that was the first time he was with a woman. Why do you need to know, Arya?! Oh, it's 'cause you want to have sex with him. Got it. That was Arya's segway into asking Gendry how many women he's had sex with. Smooth, Arya. Real smooth.

"Yes, you did," Arya pressed, correct.

"We're probably going to die soon," Arya said. "I ought to know what it's like before that happens." You can imagine what happened next.

But in case you can't... ARYA AND GENDRY MADE OUT AND THEN DID THE DIRTY. And Twitter lost it:

When I tell you I screamed!!

Twitter can't get over the moment we all watched Arya Stark bone for the first time. Just in time for the world to end! Honestly, good for you, girl. If I knew an army of blue-eyed zombies that severely outnumbered me and the people I'm fighting with, you bet you're ass I'd spend at least some of my last moments of peace getting down and dirty. Tyrion, Brienne, Jaime, Podrick, Davos, and Tormund, on the other hand, just decided to sit around a fire and drink. (And also make Brienne a knight. *Sobs*.)

Be more like Arya Stark, people. The world is literally ending.

More like this
This 2021 'Game Of Thrones' Season 8 Trailer Is So Confusing... & So Good
By Ani Bundel
These Tweets About Netflix Adding 'Big Time Rush' Will Have You Singing
By Abby Monteil
These Tweets About Regé-Jean Page Leaving 'Bridgerton' Are Royal Bummers
By Cianna Garrison
Stay up to date