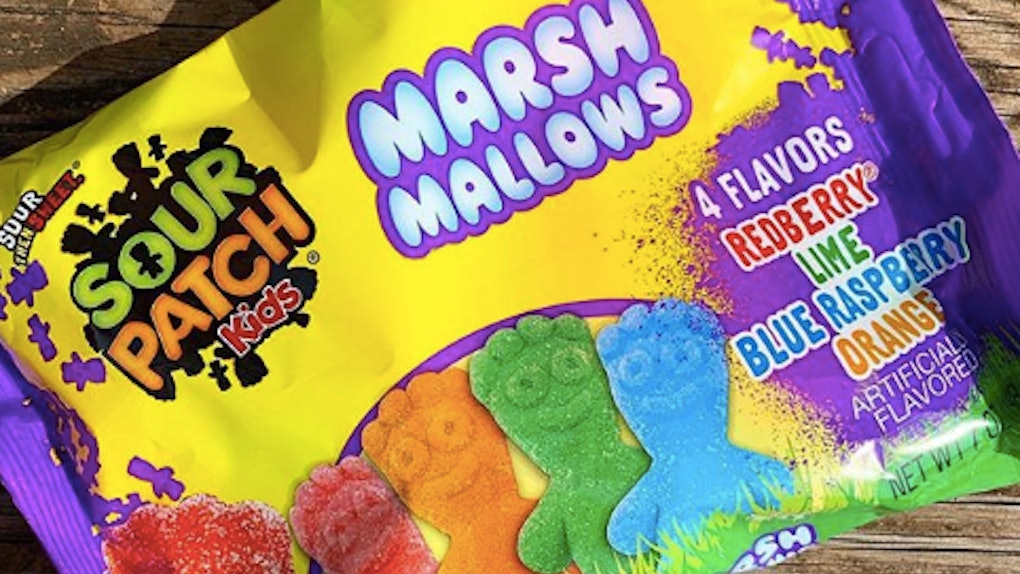 Very few things in this cruel and unusual world can surpass the beautiful delicacies that are Sour Patch Kids. First came the original candies, which are incredibly hard to beat, and then came their signature cereal, which proved to be a massive hit. But now, just in time for Easter (and also my birthday), is the greatest tart twist on your annual candy basket: Sour Patch Kids in the form of deliciously mushy 'mallows. Yes, you heard that correctly, and if you haven't already tried these Sour Patch Kids Marshmallows, it sounds like you might be missing out.

I, personally, have not yet had the chance to try Sour Patch Kids Marshmallows yet, but it looks like popular food Instagram account, @junkbanter, has already had their fair share. According to JunkBanter, you can apparently find them at Walmart (although you can't buy them on their website yet) and (hopefully) they will soon make their way to the shelves at go-to spots like Target and other major grocery stores. There isn't a ton of information regarding their availability yet. Elite Daily reached out to Mondelez International, Sour Patch Kids' parent company, for information regarding the Sour Patch Kids Marshmallows' rollout date and availability, but did not hear back at the time of publication.

Per JunkBanter's photo of the new treat, the marshmallows come in all of the SPK classic flavors, including redberry, lime, blue raspberry, and orange, and they're totally covered in sour sugar. Take a look at them for yourself, below — they are absolutely gorgeous, if you ask me.

YUM, how awesome do these look? Aside from the marshmallows' good looks, it sounds like they taste pretty great, too. In the caption of the Instagram post, @junbkanter said:

More proof that Easter candy = the greatest candy. These are already the best marshmallows I’ve ever had and I haven’t even had them yet. The hottest find in Walmart’s Easter aisle. Chubby Bunny is about to get WEIRD.

Wow, that is one heck of a review, and I definitely agree that "Chubby Bunny" games are about to go to a whole new level. I also completely agree with them that there is simply no denying that Easter candy pretty much the greatest candy imaginable. So, it goes without saying that these will be my straight-up lifeline come springtime. And the best part is that they will definitely make for some interesting s'mores.

A few years ago back in April 2016, renowned ice cream chain Baskin-Robbins created Sour Patch Kids ice cream as their highly-anticipated “flavor of the month.” Obviously, sugar-lovers everywhere totally freaked out, and TBH, I was definitely one of them. The delicious candy-inspired flavor featured a sweet base of pillowy marshmallow and tart raspberry ice cream, which was decadently swirled together with a tart Redberry Sour Patch ribbon. It was definitely ground-breaking, if you ask me, and I'm honestly still not over it. Hey, maybe these new 'mallows will inspire the ice cream chain to bring back a version of the flavor. Sour Patch Kid ice cream 4ever, yo'.

I definitely was not planning on asking anybody for any Easter presents, but it looks like SPK Marshmallows have made it to my non-existent list. Between you and me, I usually can't stand when holiday candy arrives to grocery stores several months too early, but for this, I can totally make an exception. At this point, the Easter candy aisle could seriously not show itself sooner. Easter parties all year long, guys.