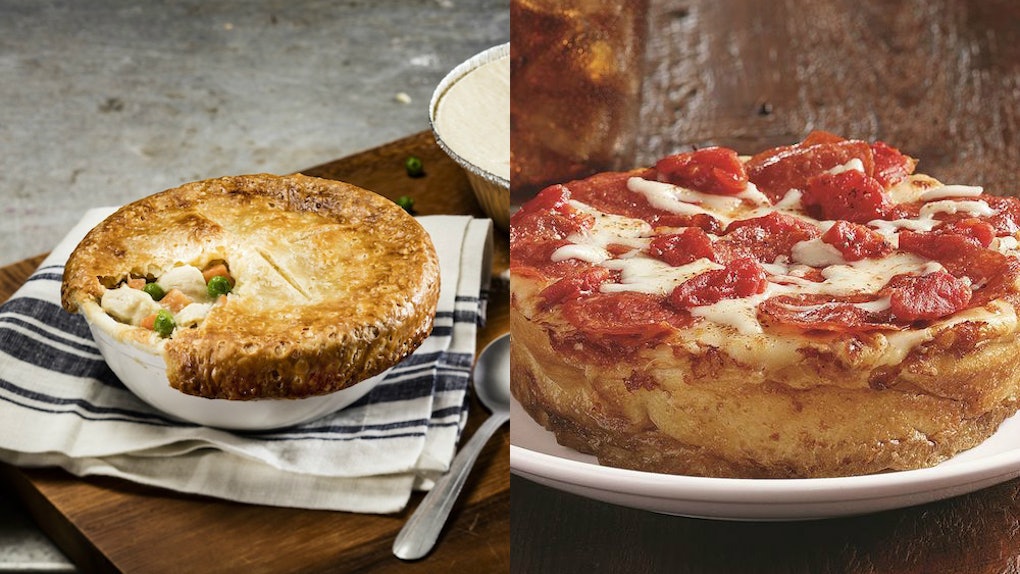 There's a major difference between "pi" and "pie," and as someone who dreaded math class for her first 18 years of life, I can confidently say I much prefer "pie" to "pi." But in honor of National Pi Day (aka March 14... get it?) several fast-casual restaurants, bakeries, apps, and more are offering delicious deals on so many different kinds of pies. So make sure to check out each and every one of these Pi Day 2019 deals — I can pretty much promise they'll make the math-themed day a helluva lot more fun.

Whether you're in the mood for a pizza pie, a pumpkin pie, or even a meat-filled pie, there are so many restaurants and companies out there who are finding reasons to celebrate Pi Day. Some are offering BOGO deals, others are giving out major discounts, and a few are even selling pies for only $3.14 (which FYI is equal to the value of pi). Anyway, make sure to take look at the various National Pi Day deals, below. They'll save you some money and give you an excuse to eat pie, so what more could one ask for? Sounds like Pi Day is about to be my new favorite holiday.

Popular meal kit subscription service, Plated, is getting in on the Pi Day fun by offering first-time subscribers free dessert for a year, according to the brand. To redeem the offer simply logon to their website and use the code PiDay on or before March 14.

If you'd prefer a savory pie, on the other hand, Boston Market's Pi Day coupon will get you a free Rotisserie Chicken Pot Pie with the purchase of another Pot Pie and drink. It will be redeemable at over 450 participating restaurants, but call your local restaurant in advance to make sure it's available near you.

Maybe you're too busy to run out on March 14, and if that's the case, don't worry — Domino's delicious deal lasts far beyond Pi Day. According to RetailMeNot's press release, you will be able to get buy-one-get-one Domino's pizza pies using this RetailMeNot's coupon code all the way through March 18.

North American grocery store chain, Stop & Shop, will be celebrating the delicious holiday by offering 8-inch pies for $3.14, according to the brand. Flavors will include pumpkin, apple, and Dutch apple, and the deal will be valid on March 14 only.

Seeing as Papa John's is famous for their pies, it should come as no surprise the chain is celebrating the math-focused holiday. In fact, Papa John's will be celebrating Pi Day by offering this RetailMeNot coupon. Using it will save you 25 percent off your regular menu price order.

Hungry Howie's is going big for the number-centric holiday, too. By ordering online and entering the code 19PI at checkout, according to RetailMeNot's press release, you'll be able to get a medium one-topping pizza for $3.14 with the purchase of any bread at regular menu price. It's available for carryout orders only between March 11 and March 14 at participating locations.

CPK is celebrating not with pizza pies, but with an unusually sweet deal. California Pizza Kitchen restaurants will be offering slices of their signature Key Lime Pie for only $3.14. Sounds sweet to me.

If Pizza Hut is more what you're in the mood for, on the other hand, you'll be able to get three medium, one-topping pizzas for $5 each by using this RetailMeNot coupon at checkout. It'll definitely save you quite a bit of cash on the three pies, to honor the big day.

To commemorate the number-themed holiday, Whole Foods Market shoppers will get the chance to select their favorite large bakery pies for $3.14 off the normal sale price, according to a press release. Prime Members will receive an additional 10 percent off, so sign up ASAP.

Any pizza can be a personal pizza if you try hard enough, and Fresh Brothers is offering personal pizzas for only $3.14 with any amount of toppings, according to the brand. To redeem the offer, simply use the promo code PIDAY on Thursday, March 14 for pick up, dine-in and delivery order. Keep in mind it isn't valid for orders made through any third party site.

If you've never heard of Slice, it's an online and mobile pizza ordering platform to help customers find pizza near them. And for Pi Day this year, they're giving new users $7 off their first Slice app purchase on iOS and Android, according to the company. Just use the code LOCALPI7 at checkout, and make sure your order amounts to at least $15.50.

Popular restaurant and bakery, Marie Callender’s will be offering a free slice of pie on Thursday, March 14, as long as you show off their Pi Day coupon at checkout, according to the brand. The coupon is available for download on the Marie Callender’s website, and make sure to choose wisely — the bakery offers a total of 20 different flavors.

BJ's Restaurant & Brewhouse is offering guests a tiny taste of paradise on Pi Day. According to a press release, any and all dine-in customers will have the chance to purchase a mini one-topping pizza for $3.14 on March 14 only.

Cheddar’s Scratch Kitchen restaurants nationwide will be offering a “Pie One, Get One” deal on their homemade chicken pot pies, according to the brand. Orders must be in-store or ToGo, and the second pie will be take and bake at home. No coupon necessary, and if you aren't a chef, don't worry – Cheddar’s is providing you with all the baking instructions you might need.

Your Pie, a fast-casual pizza chain, is offering pies for only $3.14 at participating locations, according to the brand. Select locations will also be offering games, bounce-backs, prizes and giveaways throughout the day. Check out the Your Pie website for more details.

Your favorite convenience store, 7-Eleven is offering a wide range of Pi Day deals. You can get a full pizza for $3.14 through the 7NOW delivery app, 7Rewards customers can get a 50 cent slice, those who buy a whole pie can earn 314 7Rewards bonus points upon scanning the 7-Eleven app at checkout, according to the brand. Nice.

There are so many delicious deals to choose from, so make sure to eat your heart out on March 14 this year. Man, it seems as though my entire outlook on math has 180'd — Pi Day is seriously the greatest.