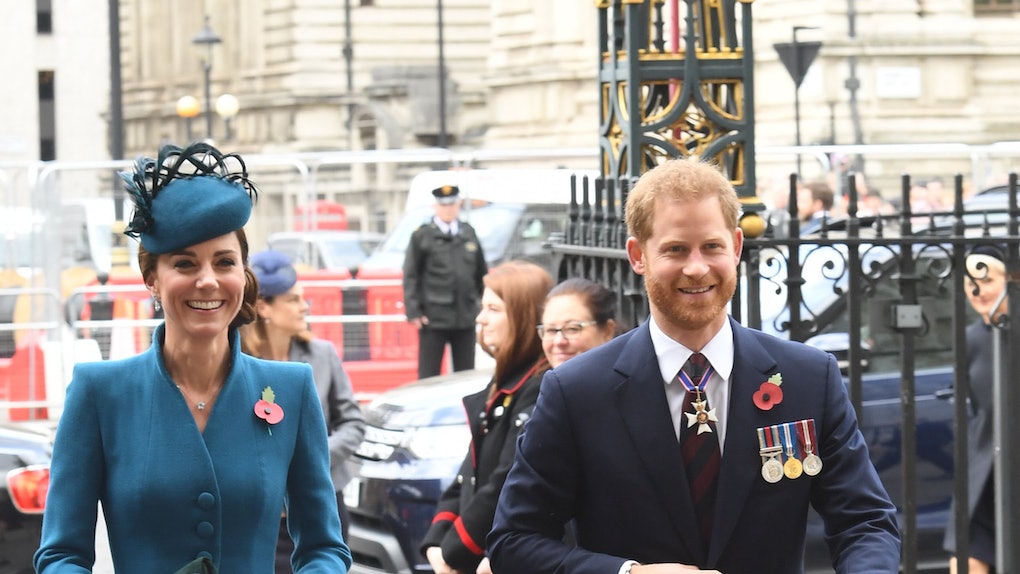 Feud? What feud? Just as rumors about a rift between Prince Harry, Prince William, Meghan Markle, and Kate Middleton seem to finally be dying down for good (I hope), the Duke of Sussex made a surprise appearance with the Duchess of Cambridge at the Anzac Day Service of Commemoration and Thanksgiving at Westminster Abbey on April 25 in London, England. And the photos of Prince Harry and Kate Middleton laughing together will give you all the feels because the two look like super chummy besties, and I kinda want to be a sibling-in-law with both of them.

We already knew that Kate would be representing the royal fam at the event. But her brother-in-law Harry popping in with a big ol' smile on his face was a totally fun shocker — especially since he's about to become a new dad any minute now. I guess we can safely put an end to all the speculation that his wife, Meghan Markle, has gone into labor!

Anyhoo, I'm totally in love with the relationship between these two. They really seem to enjoy each others' company and get on like a real brother and sister would, and these pics give me major hope that everything is A-OK with the Fab Four.

Check out the way Harry and Kate look at each other:

So what is Anzac Day, anyway? According to the Westminster Abbey's website, the annual service "will remember the [World War I] Gallipoli landings of 25th April 1915, and all Australians and New Zealanders who have given their lives in the service of their countries."

Last year, it was Meghan who attended the event with Prince Harry and Prince William. But since she's currently MIA thanks to a more pressing matter — aka, she's about to give birth to the couple's first royal baby — we were all gifted with Kate's attendance this year instead. And I must say, I am totally digging her dark teal coat and matching feathered fascinator.

Oh, to live a life where wearing a feathered fascinator is de rigeuer! She's just so chic, I seriously can't take it.

And Harry is looking pretty dapper himself, in his navy blue suit pimped out with medals.

These two really do seem to share such a great bond. I just love the levity this pairing seems to add to every situation, even an event as solemn as this one.

Oh, and if you're wondering where Prince William was, he apparently arrived in Auckland, New Zealand, on April 25 for a two-day visit to commemorate Anzac Day and also to honor the fallen soldiers and victims of the Christchurch terror attack.

He was sporting some service medals, too:

The Duke of Cambridge attended the Auckland Civic Service at 11:00 am on Anzac Day, where he placed a wreath of red and white flowers on behalf of his grandmother, Queen Elizabeth II, at the foot of a monument honoring the military.

To sum up: William was busy being a stand-up guy down in New Zealand. Meghan probably hasn't given birth. And Harry and Kate are total besties.

In other words... the Fab Four is still total #FamGoals and don't try to tell me otherwise.

More like this
Will Prince Harry Attend Prince Philip's Funeral? He's Reportedly Planning On It
By Cianna Garrison
Prince Harry Looks Like Prince Philip Did In This Photo From The '50s & It's Wild
By Michele Mendez
Princess Eugenie's Instagram Tribute To Prince Philip Recounts Their Sweet Bond
By Brandy Robidoux
Stay up to date