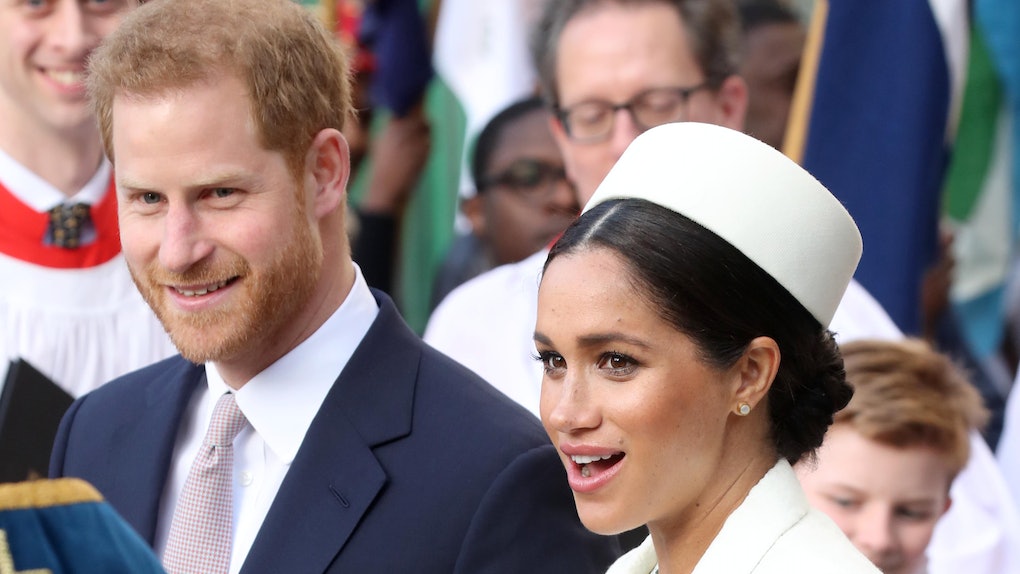 Prince Harry and Meghan Markle just went full uncle and auntie mode. Today is Prince Louis' first birthday, and just like she does every year on her kids' birthdays, Kate Middleton took some gorgeous portraits of the little prince and released them on the Kensington Royal Instagram account. First of all, can we talk about how good of a portrait photographer the Duchess of Cambridge is? Second, Meghan and Harry's comment on Prince Louis' birthday photos is the sweetest thing, and it also has me convinced that Meghan Markle is running the Sussex Royal Instagram account like fans suspect.

The Kensington Royal account posted three photos taken by Prince Louis' mama on April 22, in honor of his April 23 birthday (which, in the most British fashion, he shares with William Shakespeare). The first post showed Louis wearing a red sweater and posing in some #nature with a big smile on his face. The second photo showed little Louis in a blue sweater with a doggo on it.

The Duke and Duchess of Cambridge are delighted to share these new photographs of Prince Louis ahead of his first birthday tomorrow 🎈The photographs were taken earlier this month by The Duchess at their home in Norfolk.‬

The caption for the photo with the blue sweater had a slightly different caption, but it was, for all intents and purposes, the same.

Now, let's take some time to take a look at this very. Cute. Baby.

Auntie Meghan and Uncle Harry commented on the post saying, "Happy Birthday Louis! Sending lots of love from both of us." Short, and sweet!

Harry and Meghan, who are going to become parents themselves any day now (we're officially on royal baby watch, people!), also posted an Instagram in honor of Queen Elizabeth's 93rd birthday on April 21.

"Happy Birthday Your Majesty, Ma’am, Granny. Wishing you the most wonderful day! 🎈Harry & Meghan," the caption read. The photos showed throwback photos of the queen, some old shots of her and Harry at different ages, shots of her and Meghan together, and shots of the three of them together. This family is busy with birthdays this week! And it's entirely possible they're about to add another April birthday to the fam.

Enough about babies and birthdays for the moment, though. I want to talk about this theory that Meghan Markle runs the Sussex Royal Instagram account.

Fans online believe that the way the captions on the Sussex Royal account are written scream Meghan Markle. Before she was a full-time royal, and before she was even dating Harry, Meghan ran a popular lifestyle blog called The Tig, on which she shared her experiences with her health, fitness, nutrition, etc. That's all to say that Meghan knows how to run a successful blog, which translates easily to social media.

This makes it easy to believe that the Duchess of Sussex is running her and Harry's official Instagram. Fans also noticed that the American spelling of certain words are being employed in the captions, leading them to believe that it's either Meghan running it, or an American staff member. But since when do English royals have American staffers? The fact that the comments and captions from the Sussex Royal account also frequently include emojis is a strong hint that it could be an American named Meghan running this Instagram.

The fact that they're actually commenting on other Instagram posts, like their nephew's on April 22, strays from the typical royal social media practices. So, what do you think? Is Meghan running the Sussex Royal Instagram account now that she can't have one of her own? It wouldn't be the first time she and Harry shirked tradition.