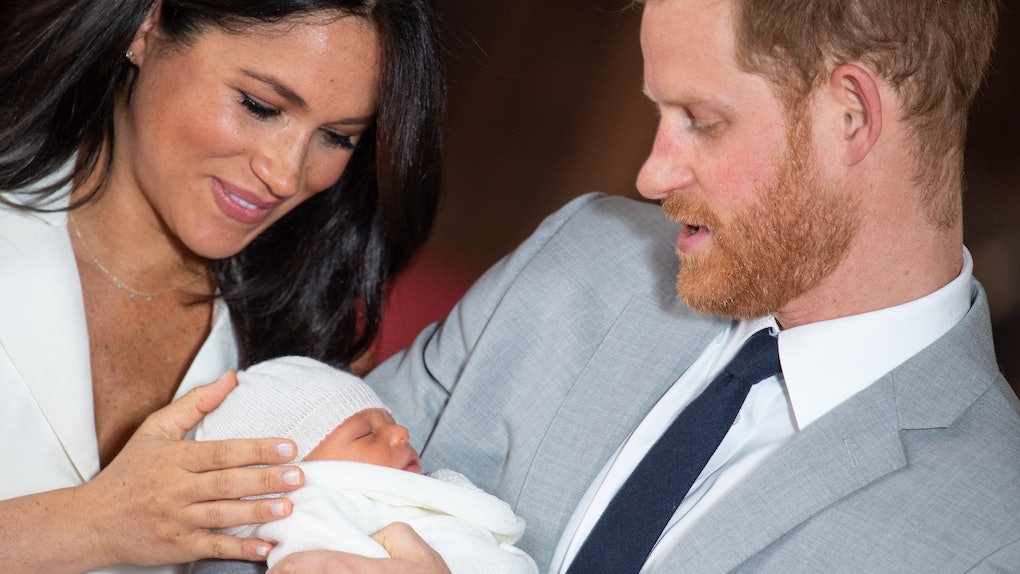 Saturday, July 6 is an incredibly monumental day for the British royal family. Prince Harry and Meghan Markle's son, two-month-old Archie Harrison Mountbatten-Windsor, was officially christened. And if you haven't been staying up-to-date on what's happening with the young Prince, check out these photos of Meghan and Harry at Archie's christening. They really show off the proud parents.

While the royal family tends to value longtime traditions, it seems as though Harry and Meghan are breaking away from the norm. The royal baptism is usually a very public affair. However, Markle and Harry decided keep Archie's baptism totally private. That means they chose not to live stream it, they didn't allow for fan gatherings in the general area, and they prevented any photographers from taking any candid photos. So as you'd imagine, I've been eagerly waiting for updates.

According to The Mirror, the baptism took place at St. George’s Chapel at Windsor Castle, which is the same location where Markle and Harry got married, as well as where Prince Harry was christened 35 years ago. It was a very intimate service (about 25 guests) and it was officiated by the Archbishop of Canterbury, Justin Welby. And even though the affair was kept under wraps, the royal family posted the below photos to the official Sussex Instagram account. Everyone looks so excited.

Upon swiping left, you'll see the second photo, which is in black-and-white. It features Harry, Meghan, and Archie sharing the commemorative moment. Understandably, each of them look elated.

According to the caption of the Instagram post, the outfit Archie wore during the ceremony carried important history. It was a replica of the royal christening gown that has been worn by royal babies for many years. Read up on the importance of Archie's ensemble, below.

Their son, Archie, was baptised wearing the handmade replica of the royal christening gown which has been worn by royal infants for the last 11 years. The original Royal Christening Robe, made of fine Honiton lace lined with white satin, was commissioned by Queen Victoria in 1841 and first worn by her eldest daughter. It was subsequently worn for generations of Royal christenings, including The Queen, her children and her grandchildren until 2004, when The Queen commissioned this handmade replica, in order for the fragile historic outfit to be preserved, and for the tradition to continue.

The caption also mentioned they celebrated with the godparents of Archie, which have not been officially announced yet. Elite Daily reached out to Buckingham Palace for comment on the matter, but did not hear back in time of publication.

Overall, it sounded like quite a family affair. According to CNN, members of the St. George's Chapel Choir were set to sing at the ceremony, and a silver baptismal font commissioned by Queen Victoria and Prince Albert, called the Lily Font, was used at the christening. Overall, it sounded like a super special moment, and TBH, I'm still upset I wasn't invited. I guess these gorgeous photos will just have to do.