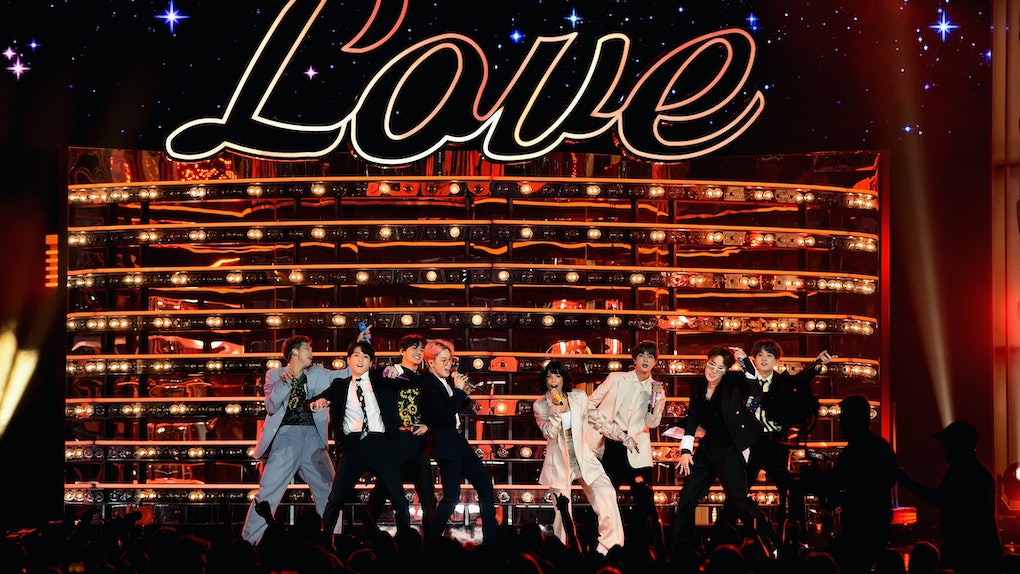 It's truly a beautiful day when K-Pop worlds collide. At a recent BTS concert in Chicago, Illinois, BTS met up backstage with fellow Korean music group Tomorrow X Together, aka TXT. To commemorate the K-Pop greatness, the boys posed for pics together, and these photos of BTS and TXT at BTS' Chicago concert will make you love their friendship even more. And if you're like me, the pic will have you crossing your fingers for a musical collaboration between the two groups.

On Saturday, May 11, The BTS boys RM, Jin, Suga, J-Hope, Jimin, V, and Jungkook performed their first of two shows at Soldier Field in Chicago, Illinois. After the concert, they met up with some very special fans and friends backstage, Soobin, Yeonjun, Beomgyu, Taehyun, and Huening Kai of TXT. Both BTS and TXT are managed by BigHit Entertainment, so meeting up backstage was almost like a family moment if you think about it. In the photo, BTS and TXT members are casually posing, mostly in jeans and hoodies, making peace signs with their fingers or sticking their thumbs up. Both BTS and TXT posted the photos to their official Twitter accounts. BTS captioned the photo, "We met @TXT_members." According to a translation from Korean music site Allkpop, TXT captioned theirs "Sunbaes! We really enjoyed watching your performance today. You were so awesome!"

Just so you know, "sunbaenim" is a Korean phrase that means "senior," but not as in an elder; rather, as someone who did something before you or has more experience in an area.

TXT also shared a video from watching BTS perform in front of ARMYs in Chicago, and of course they shared a big ol' thumbs up for their sunbaenims. According a translation of the caption, it read, "It was truly an honor to see our sunbaenims in a stage like this!! [S]unbaenims, you're the best!!!"

This isn't the first time the label-mates have met up and snapped a cute pic. Back in March 2019, when TXT was still newly signed by BigHit Entertainment and the boys had just dropped their album, The Dream Chapter: Star, they got a chance to meet up with the BTS boys and get some advice from them for the first time. In case you didn't know, getting industry advice from a group as successful as BTS is a pretty big deal, and TXT knew it. After the meet-up, TXT took to Twitter and, according to fan translations, wrote, "Thank you so much for giving us time and saying such nice things to us with good advice. We will do our very best to be your juniors! We love you, our sunbaenims."

TXT's love for BTS is nothing new, and there are countless examples of times when TXT has thanked their "sunbaenims" for guidance. On March 5, 2019 at their debut showcase, TXT shared that the group was honored and touched by BTS' advice and they planned to work hard to live up to BTS' reputation. Both K-Pop groups have also performed in the same space. Their first time on the same stage was back in April on South Korean music show M Countdown where BTS performed "Boy With Luv" and TXT performed "Cat & Dog." After the performances, both groups hung out and chatted on stage.

The friendship between these two talented groups of artists is honestly so adorable, and hopefully TXT will be able to learn, grow, and thrive from BTS' guidance, seniority, and advice. Oh, and hopefully there is plenty of photo documentation along the way, because who doesn't love a BTS and TXT photo op?