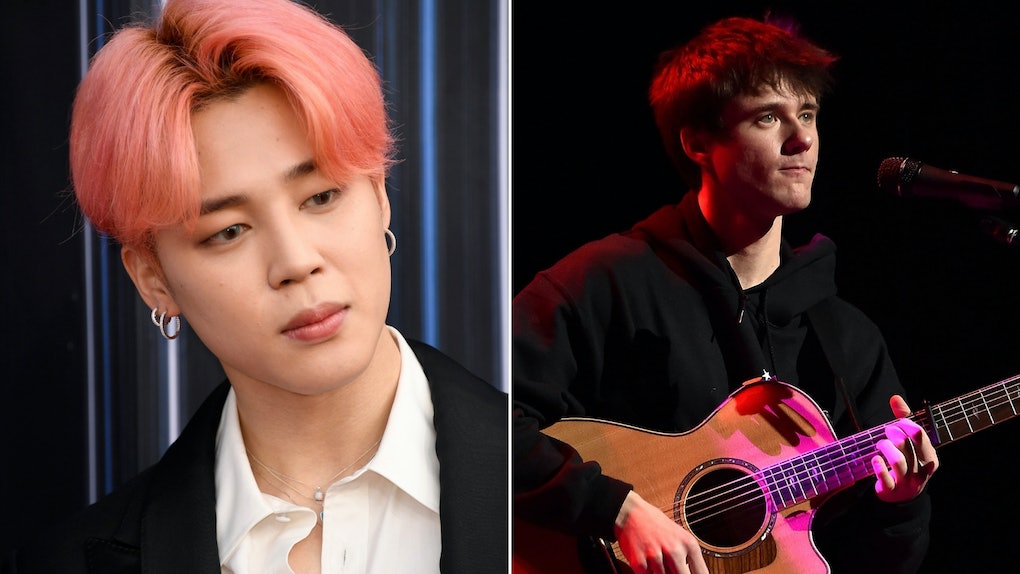 It's always so awesome to see celebs becoming BFFs in real time. This time, it looks like iconic pairings like Taylor Swift and Selena Gomez will have to make room because there's a new friendship that's brewing. It's the biggest friendship yet — an international duo that has fans from all over the world buzzing on social media. Check out these photos of BTS' Jimin at Alec Benjamin's concert in South Korea and you'll totally understand why the two singers are the total definition of friendship goals of 2019.

BTS' Jimin and Benjamin's friendship hit a new milestone when Jimin attended the Alec Benjamin concert on Aug. 18 at the MUV Hall in Seoul. To the excitement of fans, the official BTS Twitter account posted a tweet with a photo of the two singers together post-concert. The two look adorable in the photo as Jimin casually strikes a pose and Benjamin smiles at the camera. Jimin sings praises to Benjamin with the caption: "Your voice is heavenly. Thanks for coming."

Benjamin returned the love with a response to the tweet: "You're the best." Of course, he doesn't forget to add a smiley face and a heart to fully emphasize the Jimin appreciation. This is some serious next-level friendship.

Benjamin also posted his own shoutout about the Seoul concert and meeting on Twitter. The singer tweeted, "Seoul was amazing! Thanks so much for coming to my show, Jimin." Accompanying the tweet is another photo of the duo standing in different positions. They look super chill, like their kicking back and relaxing. It all makes sense, since it was a truly wild concert.

During the concert, Benjamin paid homage to his friend by singing a cover of BTS' hit song "Fake Love." The stripped down version of the hit K-pop song was absolutely serene and highlights Benjamin's strong singing voice. The crowds at the Seoul concert definitely loved it as they sang along with Benjamin and cheered loudly throughout. The video of the precious moment, which has since been making its rounds on social media, has been inspiring even more fans to join in on praising the cross-cultural friendship.

So just how did Jimin end up at the Benjamin concert in Seoul on Aug. 18? It turns out Benjamin had reportedly reached out to the BTS member and invited him to come out for the Seoul concert. Last month, Benjamin noticed that Jimin had added the singer's track "Water Fountain," along with four others by Benjamin, on his Spotify playlist. Benjamin replied to the screenshot of Jimin's stellar playlist called "Jimin's JOAH? JOAH!" with the tweet: "This is so cool. I love you & BTS!"

The relationship timeline between Benjamin and Jimin proves that there's really no better way to grow a friendship than through shared passions. In this case, the singers' love of music connected the two despite international distance. It's so inspiring to see them mutually support each other's careers in the industry and get a look into their post-concert hangouts. This is a friendship duo that I'll definitely be keeping tabs on!