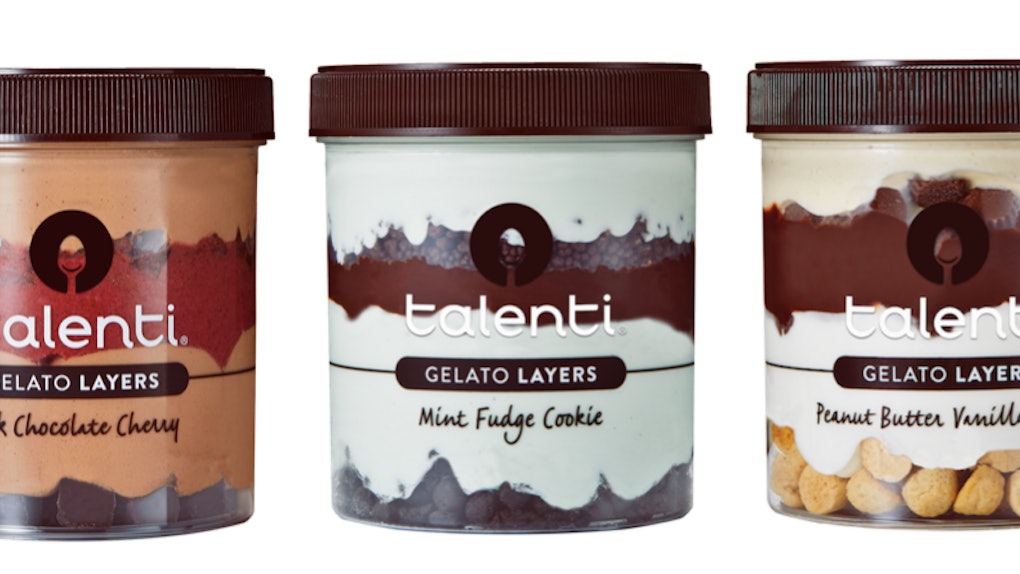 Maybe it's because I'm getting old, or it might just be because I'm lazy (which is probably the case). But either way, very few things give me more pleasure than a good old-fashioned Netflix-and-chill night... especially when there's sugar involved. And luckily for an old soul like me, one the greatest frozen dessert brands out there just released a tasty looking line that's — without a doubt — about to make those nights in bed even better. These new Talenti Gelato Layers look straight-up delicious and I can't wait to indulge for a truly ~wild~ night.

Popular gelato brand Talenti just redefined "decadence" with Gelato Layers, which are officially available as of March 5, per Talenti. If you can't wait to get a taste, though, eagle-eyed consumers have been spotting the flavors on shelves since March 2. According to the brand, they're a new range of Talenti flavors that feature not three, not four, but five super rich layers (yes, five!). They're made up of gelato, tasty chunks (whether it's cake, cookies, or truffles), and last but not least, lots and lots of sauce. There is a total of seven different varieties, and they're now available in select grocery stores nationwide, selling anywhere between $5.49 and $6.49 per jar. With these unique new additions, there are now 47 total gelato and sorbetto Talenti flavors, and to be completely honest, I'm dying to try each and everyone of them.

Bringing chocolate and vanilla to the next level, this one features a layer of Double Dark gelato followed by chocolate cookie chunks, fudge sauce, Madagascan Vanilla Bean gelato, and chocolate-covered waffle cone pieces, per the brand. Needless to say, I'm so in.

Calling all sweet and salty lovers! The Salted Caramel Truffle flavor features a layer of Talenti Sea Salt Caramel gelato followed by a layer of chocolate cookies, Talenti dulce de leche sauce, a layer of Vanilla Gelato and finally, chocolate caramel truffles, according to Talenti. My mouth is seriously watering.

Reminiscent of the classic dessert, this Cheesecake gelato is made with actual cream cheese, and it's mixed with semi-sweet chocolate flakes Black Cherry sauce, another layer of Cheesecake gelato and graham cookie pieces, according to Talenti. My god.

"Everybody likes parfaits," according to Shrek's BFF Donkey, and this one definitely doesn't disappoint. Combining Black Raspberry gelato, black raspberry puree, oat crisps, a layer of Blueberry sauce, vanilla gelato, and more oat crisps, per Talenti, Black Raspberry Vanilla parfait is definitely one for the books.

According to Talenti, Josh Hochschuler, the founder of Talenti, says each Talenti Layers flavor is handmade and incredibly high quality. Eating them is truly an experience.

Talenti Gelato Layers truly brings our commitment to craftsmanship to life. Each Talenti Layers recipe is hand-crafted to include quality ingredients sourced from around the world. Talenti Layers promises a new eating experience for fans as they indulge in each layer.

So there you have it. Broad City marathon nights have been completely revolutionized for me, adding a new flavor (er seven of them!) to the mix. Needless to say, a grocery run is definitely in order for me today.