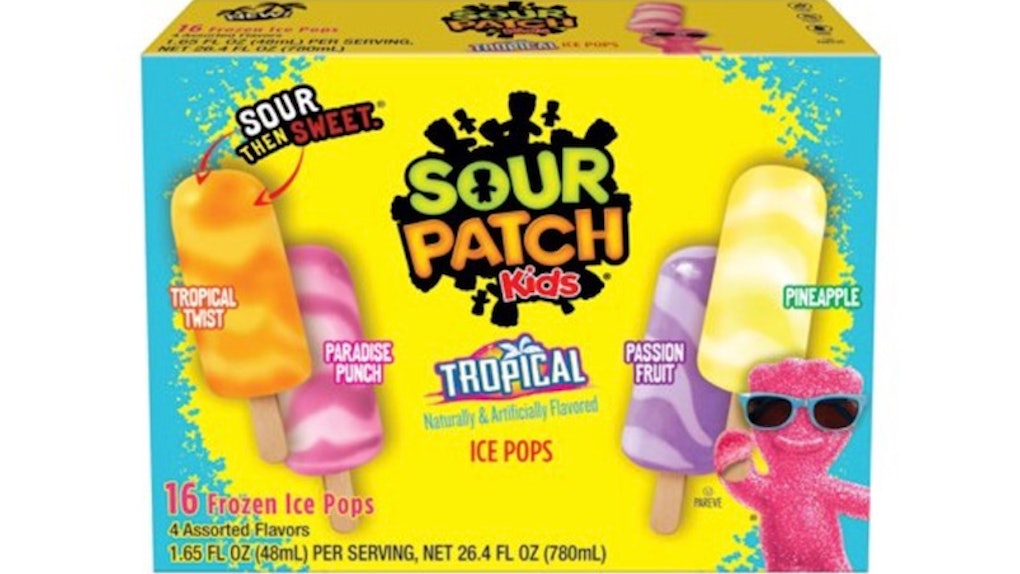 If you ask me, there's nothing like sitting on the beach with a frozen popsicle at hand. I usually opt for something sweet, but it looks like I'm going to be snacking on some tangy desserts in the sand this year. That's because new Sour Patch Kids Tropical Swirl ice pops are here, and they sound like the perfect tropical treats for those steamy beach days. Once you find out more information about the pops (more specifically, the new sour-then-sweet flavors), you'll be craving a box of your own.

Still, something tells me that the ice pops will be just as good as the Tropical Sour Patch Kids gummy candies (if not, better). I mean, could you imagine how delicious a Paradise Punch popsicle would taste on the beach? Talk about refreshing.

If you're hoping to bring Sour Patch Kids Tropical Swirl ice pops to the beach this summer (in a cooler, of course), you might be wondering where you can buy a box. According to Best Products, they're currently for sale in Walmart's frozen aisle for $3.88. However, if you search for the pops online, you'll notice that they aren't available for delivery. With that being said, check if your local Walmart is carrying the flavor before stopping by on your way to the beach.

Believe it or not, these aren't the only Sour Patch Kids-flavored desserts in the frozen aisle at Walmart. In April 2018, Sour Patch Kids ice cream became available — and by the looks of it, the product is still on the shelves. According to the product's packaging, the Dreyers ice cream is made with light vanilla ice cream, lemon sorbet, blue Sour Patch Kid "bitz," and "redberry swirl." It's currently available at Walmart for $3.48, but I'd double check with your local Walmart store to see if it's in stock near you.

If it is, fill your cooler with both Sour Patch Kids desserts and head to the beach.