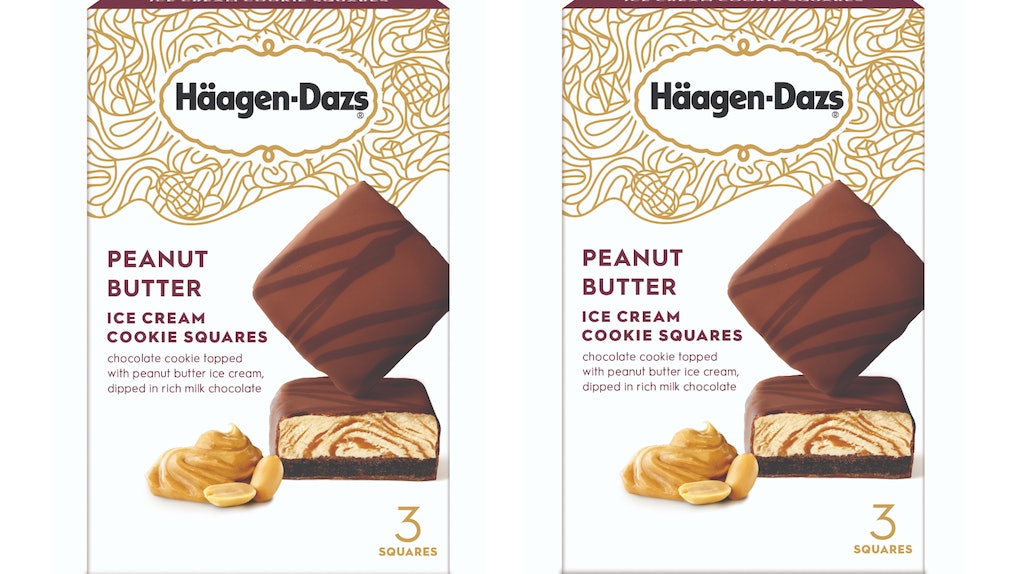 The freezer aisle just got a major upgrade, folks. If you're in the mood to celebrate warmer spring temperatures, look no further than Häagen-Dazs brand new ice cream treat that will transport you straight to summer. These new Häagen-Dazs Peanut Butter Cookie Ice Cream Squares are the perfect dessert for sunnier days ahead.

In February 2019, ice cream brand Häagen-Dazs released new ice cream snacks, just in time for warmer weather. The Peanut Butter Cookie Square got my attention right away because, let's be real, how could it not? The squares are made with a chocolate cookie dipped in peanut butter ice cream, swirled with more creamy peanut butter, dipped in milk chocolate for the decadent chocolate shell, and finally drizzled with dark chocolate. Each box comes with three squares, just in case you're like me — and one or two is not enough. In case that wasn't enough good news for you, here's more: these bad boys aren't a limited-edition or seasonal release item. Fans can expect Peanut Butter Cookie Squares to stay on shelves for the foreseeable future, according to the brand. Maybe there is some good in the world, after all.

If you heard about these tasty bites a couple months ago but couldn't find them in stores, worry not that it was a slow rollout, and they should now be widely available, according to Häagen-Dazs.

Häagen-Dazs' Cookie Squares also come in Dulce de Leche and Vanilla. All squares can be found at retailers nationwide, and the Peanut Butter Cookie Square can be all yours for $5.49.

The Peanut Butter Ice Cream Cookie Squares aren't Häagen-Dazs' only new, mouthwatering invention. The company also recently released Non-Dairy Chocolate Fudge Frozen Dessert Bars, ice cream bars made from Belgian chocolate, cocoa, swirls of chocolate fudge, and a rice milk chocolate coating. Each box can be found in a three-pack for $5.49. Like the PB Ice Cream Cookie Squares, these bars are a permanent fixture in the ice cream aisle — and are a perfect option for people who don't or can't eat dairy.

Though these flavors look absolutely incredible, Häagen-Dazs also recently released a new line of boozy ice cream flavors that are the perfect addition to any BBQ or party, and they are a good option if you want to make dessert slightly more festive. The new line has flavors like Irish Cream Brownie, which is made with Irish cream, fudge swirls, and real brownie pieces; Bourbon Vanilla Bean Truffle, which is vanilla ice cream infused with "spicy bourbon" and truffle pieces; Rum Tres Leches, which features actual pieces of tres leches cake and white rum; and a Non-Dairy Amaretto Black Cherry Almond Toffee flavor that is pretty self-explanatory (and sounds seriously delicious). Plus, there's yet another tasty Cookie Square flavor, the Irish Cream Cookie Squares, in case you needed something to have after devouring your three-pack Peanut Butter Squares.

All the boozy ice cream flavors are available in 14-ounce cartons for $5.29 and only contain less than 0.5% alcohol, meaning it's totally possible to consume a few of these without feeling too tipsy.

With all these new flavors and iterations of Häagen-Dazs, it looks like I'll only be eating ice cream for the next couple of weeks.