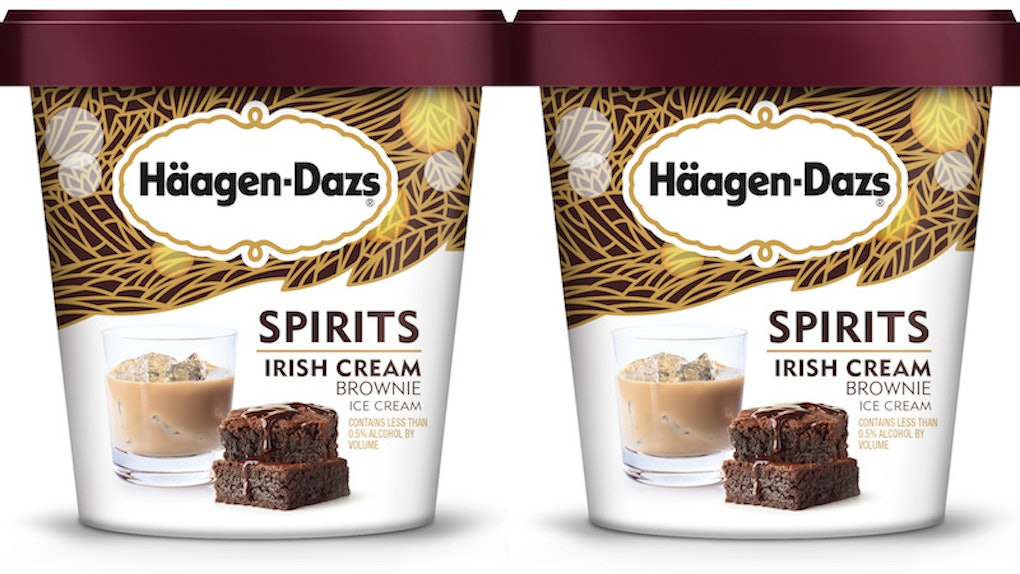 What's better than regular ice cream, you ask? Boozy ice cream, that's what. I don't know about you, but I'm a huge fan of spirit-infused desserts. That, my friends, is why I'm so excited for Häagen-Dazs' new Spirits Collection. The boozy ice cream line, which was officially announced on Feb. 7, features seven alcoholic ice cream options. (One of them is dairy free, and another is in the form of a cookie — but I'll explain more about that later.) Before I get into detail about each flavor, make some room in your freezer and have a spoon on deck.

While you're making room for the tipsy-turvy treats, there are a few things you should keep in mind. For starters, you should know how big the cartons are. According to Häagen-Dazs' press release, each ice cream carton in the Spirits Collection holds 14 ounces of the good stuff. If you're ready to buy some, check if your local grocery store has them in stock yet. Per Häagen-Dazs, the new flavors are currently rolling out nationwide — but they won't be fully available until April 2019. If your go-to supermarket already has 'em lined up in the freezer aisle, you can buy a carton (or box) for a suggested retail price of $5.29.

OK, now that I've gotten that out of the way, I'll get into the fun details about each new boozy flavor. Let's get started, shall we?

St. Patrick's Day is coming up fast, and it looks like this option is going to be my go-to pick for the holiday. Per Häagen-Dazs, the Irish Cream Brownie ice cream is spiked with actual Irish cream and mixed with fudge swirls and brownie pieces. Yum.

If you're ready for a Latin American-inspired dessert, this one's for you. Per Häagen-Dazs, the Rum Tres Leches ice cream flavor features dulce de leche swirls, pieces of Tres Leches cake, and white rum. My mouth is watering, y'all.

Häagen-Dazs' Bourbon Praline Pecan is made with bourbon ice cream that's infused with even more "brown sugar bourbon swirls," per the company's press release. Of course, praline pecans are also mixed into the dessert.

As someone who loves salty-and-sweet everything, this one is bound to be my favorite. Häagen-Dazs' Stout Chocolate Pretzel Crunch features — you guessed it — chocolate-covered pretzels, fudge swirls, and a "notes of toasted malt," according to the company's release. Plus, the ice cream itself is infused with actual stout, making it the dessert of my dreams.

Those of you who can't drink (or eat) dairy products can enjoy Häagen-Dazs' Amaretto Black Cherry Almond Toffee flavor. According to the company, the selection is made with "frozen dessert" that's infused with amaretto. In addition to the booze, almond toffee pieces and black cherry jam are swirled into the mix.

If you'd rather not break open a carton of ice cream, these Irish Cream Cookie Squares might be your best option. Per Häagen-Dazs, each chocolate cookie included in a three-pack has Irish cream-infused ice cream on top of it. Then, it's dipped in dark chocolate (my favorite).

If you're excited about all of these options, you're not the only one. Rachel Jaiven, Häagen-Dazs brand manager, talked about the boozy selections in the company's press release. She said,

The Spirits Collection was expertly crafted to offer new, extraordinary ways to indulge. Each flavor is perfect to pair with your favorite cocktail, elevate a boozy float or simply enjoy on its own.

I don't know about you, but I really want to add the Irish Cream Brownie to my next ice cream float. If you're hoping to do the same (or plan on scooping it straight from the carton), keep in mind that each product contains less than .5 percent of alcohol.

With that being said, I can't wait to buy a round of ice cream for my friends. Cheers to dessert, everyone.