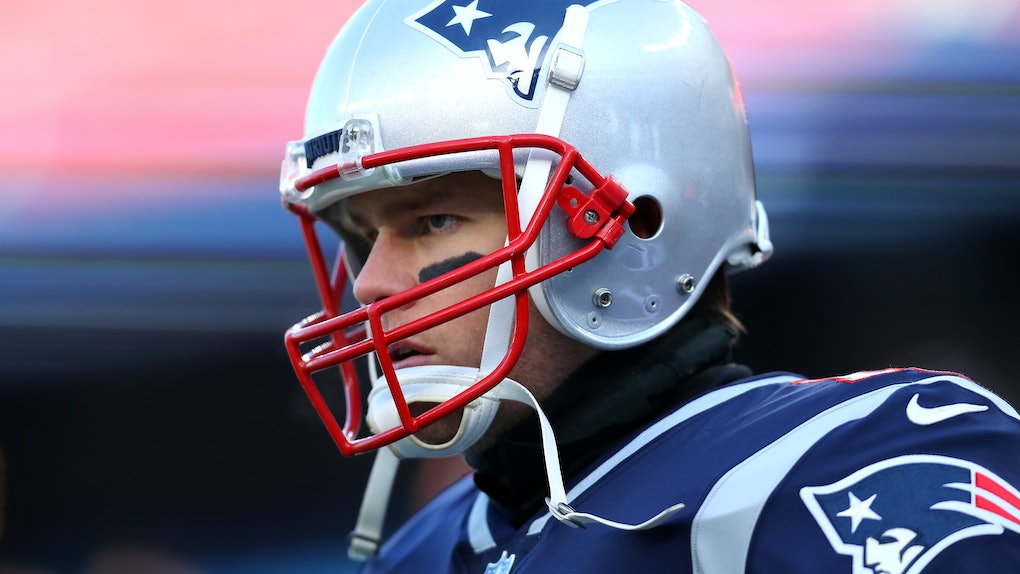 The Super Bowl LIII will take place on Sunday, Feb. 3, 2019, when the New England Patriots will go head-to-head against the Los Angeles Rams. Of course, in 2019 no major event can exist without becoming meme-ified, and TBH these memes about the 2019 Super Bowl gently poke fun at both teams, the big game, and the NFL. It it wrong to say that I'm more excited for the jokes than the game?

Many of the 2019 Super Bowl memes capitalize on jokes and stereotypes that already exist about the teams competing. Some make fun of Tom Brady's apparent relationship with refs. Others highlight the fact that people are just tired of Brady. Basically, a lot of people are interested in Brady (or joking about him). A handful of memes just root for the Rams and make predictions about who's going to win. Some Twitter users are even getting ahead of the game, literally, and speculating about the kinds of memes that will be created after the Super Bowl. Twitter user @atribecallscoob wrote, "If Brady win the super bowl imagine how many memes we gonna see online of his head on thanos body." I wonder if a Super Bowl Gauntlet is a thing?

For people who are more inclined to enjoy memes about sporting events than the actual sporting events, these memes about the 2019 Super Bowl are sure to bring some joy or at least a chuckle. People who like memes and sports: you're in for double the fun!

Deflate-gate memes will never go away.

Given number of Super Bowl appearances (and wins) Tom Brady has under his belt, it's no surprise that there are memes-a-plenty about the superstar quarterback.

Since the 2018 Super Bowl halftime show with Justin Timberlake resulted in some memes, of course, people are prepping for what's to come from this year's show featuring Maroon 5, Travis Scott, and Big Boi.

Fans are also pumped that SpongeBob song, "Sweet Victory," might hit the airwaves.

While you still have a whole night of commercials to look forward to, here's a meme from the Doritos commercial featuring Chance the Rapper and the Backstreet Boys.

The 2018 memes for Super Bowl LII were equally unforgiving toward Brady and the Patriots. Some joked that the letters in Patriots stood for "Pay All The Refs in Order to Succeed" and others accused the team of cheating. Patriot fans, however, fought back with memes like this one indicating that Brady and the team wouldn't be taken down so easily:

A meme of Brady's outerwear on game day last year was also the subject of a v. solid meme.

In addition to the memes that have already started to circulate, companies are releasing Super Bowl ad teasers ahead of the big game. Amazon has released a mysterious ad unveiling an "Amazon Beta Testing Program" which viewers will learn more about when they tune into the game on Feb. 3. Budweiser debuted a one-minute commercial to Bob Dylan's "Blowing in the Wind," boasting that the company now brews with wind power "for a better tomorrow." In their first super bowl ad ever, Olay teases viewers with a horror movie set up starring Sarah Michelle Gellar. During my personal favorite ad preview, Pepsi shared a five second clip of Cardi B tapping her red, white, and blue nails on a bedazzled Pepsi can. The ad ends with Cardi saying her signature catchphrase, "okurrrr."

The 2019 Super Bowl will be played at the Mercedes-Benz Stadium in Atlanta with kick off at 6:30pm EST. This will be the first time the stadium has hosted a Super Bowl game since its opening in 2017. The Rams and Patriots will be joined by halftime show performers Maroon 5, Travis Scott, and Big Boi and Gladys Knight, who will be singing the national anthem.

Whether you're in it for the game, the memes, the halftime show, or the Super Bowl commercials, Super Bowl LIII will surely be a game to remember.