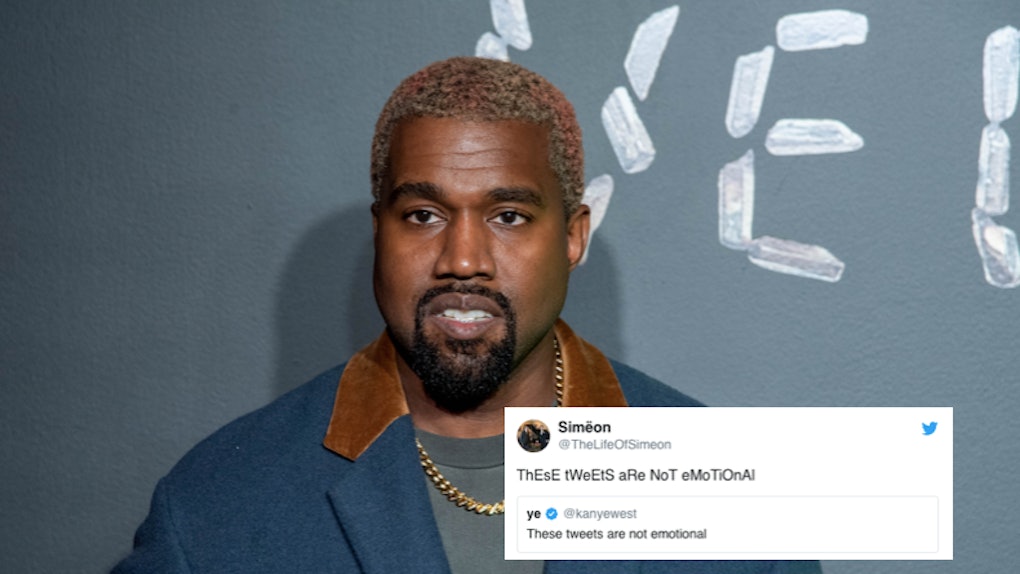 These Memes About Kanye West's Drake Rant Are Seriously Hilarious

Kanye West has stirred up something on the internet (again). In case you missed it, the "Lift Yourself" rapper took to Twitter and unleashed a fury of tweets calling out people by name left and right. And during his massive tweet spree, West posted that he demands an apology from Drake, who he claims has been threatening him. But then, rapper Travis Scott was thrown in the mix, and honestly, West unloaded so many tweets that several got lost in the shuffle. But luckily for us, some Twitter users are finding some absolute gems hidden in West's feed and are now using West's words in a hilariously relatable way. Honestly, these memes about Kanye West's Drake rant are the perfect thing to browse through after dealing with all of the ~drama~ that's been going on.

We're not going to get into the entire situation, but just so you know the basics: West started his spree after he uploaded a screenshot showing that he received a request for clearance from Drake for a track called "Say What’s Real." He claims that Drake has threatened him and his family, and that he is owed an apology. Elite Daily reached out to West and Drake’s team for comment, but did not hear back by the time of publication.

On top of that, he called out Kylie Jenner's boyfriend, rapper Travis Scott, because he's offended that Scott "allowed" Drake to work on the song "Sicko Mode." Elite Daily reached out to West and Scott’s team for comment, but did not hear back by the time of publication

It was... a lot to take in, if I'm being honest. In between West's tweets about Drake and Scott, though, were a TON of other tweets about seemingly random things. For instance, he wrote tweets like, "Nobody scared of anything," "Meditate in positivity," and one that says that "the universe will test us":

Even Ariana Grande and Miley Cyrus reacted to West's series of tweets, so you know that we're talking about some preettttyyy significant stuff.

But there's one of West's tweets that is getting a ton of attention on Twitter, and it has nothing to do with calling out another celebrity. Smack in the middle of his rant, West tweeted, "These tweets are not emotional":

So, in classic Twitter form, users have been sharing how relatable the context of the tweet is in their own personal lives.

Many sarcastically talked about how NOT emotional they were:

Others felt it was more appropriate to relate this tweet to their favorite sports team (but not me, because I don't understand the concept of literally any sport):

And one person simply felt that this tweet best represents what we should look forward to in the new year:

So listen up, you guys. Kanye West is NOT being emotional.

He's not! There is *nothing* to see here, folks!

Kanye West is just simply being Kanye West, so let's just let him do his Kanye Best, alright?