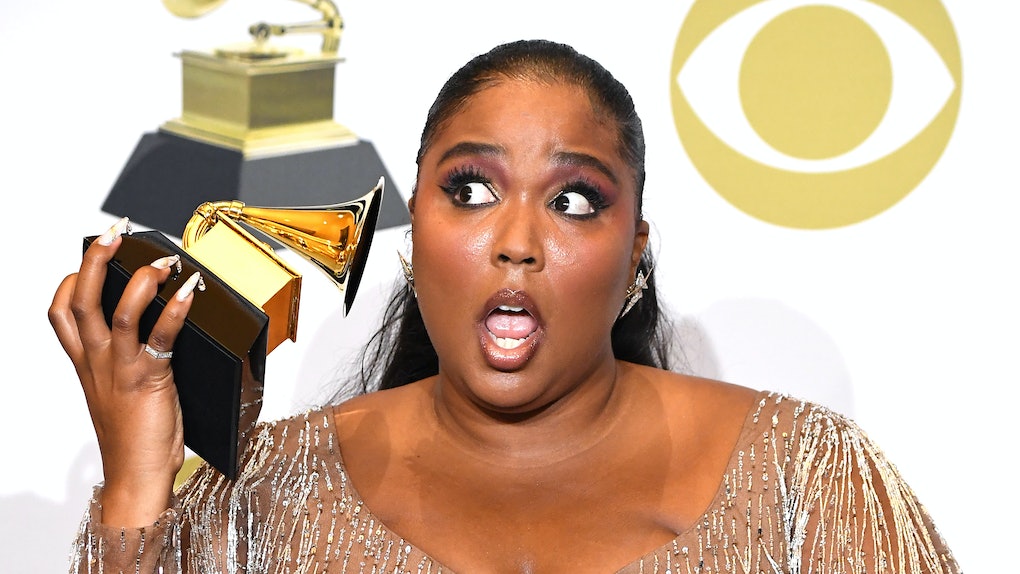 Lizzo is the epitome of queen energy. She's got multiple platinum records and Grammys under her belt, is besties with all the Hollywood elite, and, most recently, graced the cover of Vogue. Such queen energy isn't easily duplicated, but fans can sure try. As the spooky season approaches, there's a number of fierce looks Lizzo debuted in the past year that will give you major costume inspo. These Lizzo 2020 Halloween costumes are a whole. damn. look.

Somehow, even in a year where many major awards shows and red carpets were cancelled, Lizzo still managed to serve looks left and right. Lizzo started off the year strong with a stunning cover for Rolling Stone, and she graced the front of countless other magazines as the year went on. She also downloaded TikTok for the first time this year, quickly becoming one of the most viral stars on the app. Between her booty shaking clips with her besties, and her videos calling out body shamers, she's practically TikTok royalty.

As you can see, Lizzo's had herself an epic year, and, hey, who wouldn't want to channel that energy? Here's all the intel you'll need to give it a shot.

It's the ultimate honor to be invited to Rihanna's Fenty Fashion show, and Lizzo slayed the stage big time. Riri's 2020 show kicked off on Oct. 2, and Lizzo's appearance was undeniably one of the highlights. She hit the catwalk in an all-blue outfit consisting of gloves, a lacy bra and underwear, and fishnet tights. This is a super easy look to recreate, seeing as Rihanna's Fenty lingerie line carries most of the pieces.

The blue lace bra Lizzo wore in the show is currently available on sale.

The lace thong Lizzo wore is also available for purchase.

The standout part of Lizzo's look were her fishnets, which retail on the Savage x Fenty site for $50.

Now just add a pair of blue lace gloves to your look and you're ready to rock Lizzo's risque runway ensemble.

Lizzo turns heads every time she leaves the house, but she really turned the glamour up a notch when she hit the red carpet at the 2020 Grammy Awards on Jan. 26. Like the star she is, Lizzo was shining bright in a metallic silver gown which featured tinsel-like detailing all across the front. She won three Grammy Awards that night, which she proudly showed off (because who wouldn't?).

Lizzo's look probably cost a pretty penny, but Chic Me has an affordable (and slightly less dramatic) version of it on their site for $31.

Just be sure to toss a mock Grammy Award under you're arm and you'll be the biggest VIP of the night.

If you're here for some ~drama~ this Halloween, nothing was more dramatic than Lizzo's September 2020 Vogue spread. She slayed big time on the cover, and inside the glossy pages of the magazine, she continued to serve looks.

To pull this look together at home, start with a hot pink halter style bodysuit such as this one from Fashion Nova.

Most importantly, you'll want to find a massive fuchsia cape to throw over your shoulders. A floor-length cape may seem like a lot to hit the town with, but, hey, it will keep you warm during the chilly October nights.

Lizzo was looking fierce with a capital 'F' when she announced her new partnership Quay Australia on May 20. The singer delivered some old school Hollywood glamour with her post, and the looks is easy to recreate. For starters, her line of sunnies are still available on the Quay website.

Don't forget to add her chain to your order as well.

You're also going to need lots of feathers here. Lizzo rocked a black strapless dress with feathers, and this dress from Revolve will do just the trick.

Lizzo took her star quality literally on July 21 when she posted a nude photo wearing nothing but glittering stars on her body. Bold AF, but totally able to be taken public if done the right way.

To start, you'll want to pick up a nude bra like this one from Forever 21.

If you really want to go the distance with this one, get yourself a green wig, and toss your hair up in a large bun.

Now all you have to do is go out there and make Lizzo proud.

More like this
These Tweets About Regé-Jean Page Leaving 'Bridgerton' Are Royal Bummers
By Cianna Garrison
These Tweets About Jimmy Fallon's TikTok Dance Follow-Up Segment All Say It's Too Little, Too Late
By Brandy Robidoux
Michelle Obama's Easter 2021 Instagram With Barack Is A Cute Photo Booth Moment
By Daffany Chan
Stay up to date