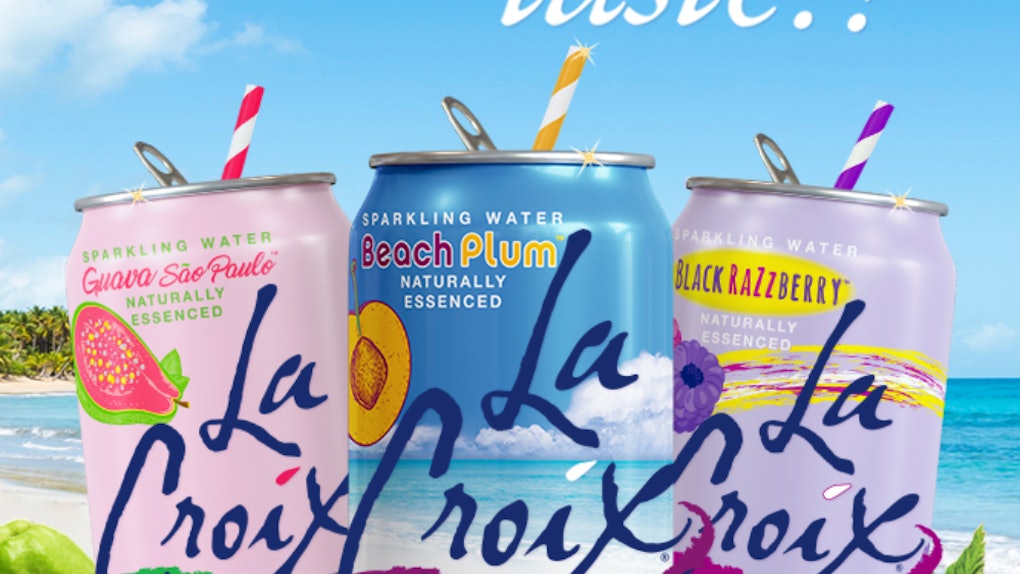 LaCroix is bringing three new flavors to its lineup of sparkling waters, and they all sound fruity AF. Even more reason to be excited: The fan-favorite sparkling water brand hasn't released new flavors since March 2020, making these the first new flavors in a year. With flavors influenced by specific locales like São Paulo, Brazil and the U.S. East Coast, these LaCroix sparkling water flavors for spring 2021 will have you hype for their release and the warm days ahead.

The new LaCroix flavors were first announced on the brand's Instagram on Thursday, March 18, and each one is inspired by unique seasonal fruits. In spring 2021, LaCroix will release its Guava São Paulo, Beach Plum, and Black Razzberry flavors nationwide as permanent additions to the brand's lineup. With there's no official release date for the LaCroix flavors, you can expect them to drop sometime during the ~official~ season — between March 20 and June 20 — so keep your eyes peeled on your grocery runs.

The first of these new flavors from LaCroix is Black Razzberry, which features a blend of fresh blackberry and raspberry notes for a smooth, fruity sip, according to a flavor description from the company. The second flavor is LaCroix's Beach Plum, a fruity offering inspired by the East Coast variety of plum, which tastes slightly more tart than a regular plum. Finally, the third flavor, Guava São Paulo, contains notes of the sweet, tropical guava fruit, commonly found in locales such as Brazil or Central America.

LaCroix is celebrating the new flavors by offering fans the chance to win a pack of each new flavor through Monday, March 22 at 9 a.m. ET. To enter to win, go to LaCroix’s Instagram giveaway post and tag a friend. Then, make sure you follow LaCroix’s Instagram. If you're one of the 1,000 winners, you'll receive a notification from the brand on Instagram sometime after the contest ends.

The three new flavors will come in 8- and 12-count packs and sell for a similar price as the other LaCroix flavors. An 8-pack of LaCroix typically costs between $3 and $3.69 for an 8-pack at Walmart and Target store locations, respectively, while a 12-pack is between $4.99 and $6.99 at retailers like Vons and Safeway store locations.

When you head out to grab some LaCroix and sip on some of the most unique flavors yet, remember to follow the most updated CDC guidelines on social distancing and mask-wearing.