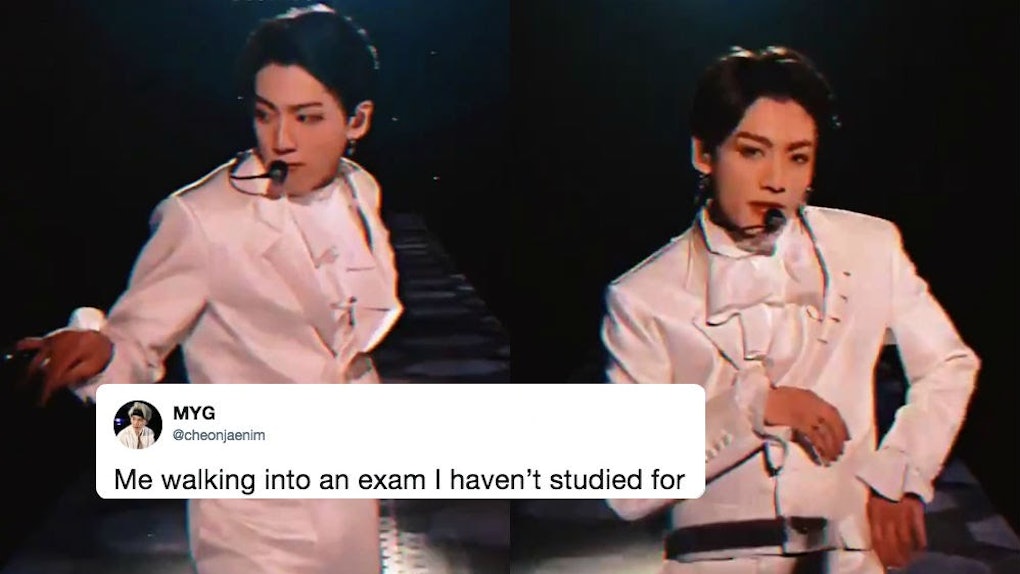 2018 has been a year that was chock-full of memes, and as we draw near the new year, it seems that there's one more that managed to squeeze through. For those of you who are BTS fans, you'll know that the seven-man K-pop group has been crushing life. And you'll definitely know that the band's youngest member, Jungkook, is talented AF. So when he took the stage at last week’s Mnet Asian Music Awards in Hong Kong, he truly ~werked~ the runway — so much so that Twitter has now run wild with Jungkook runway walk memes. His flair for walking the runway has been set to Beyoncé's song, "Partition," and let me tell you, you're going to want to scroll through ALL of Twitter for this.

To back things up a quick sec — The MAMA awards took place on Dec. 10 through Dec. 14, and the event honored several of Asia's biggest stars, and obviously, that included BTS (who took home the grand prize awards for Artist and Album of the Year, NBD).

During the final ceremony in Hong Kong on Dec. 14, the boy band performed their song, "Airplane Pt. 2," off of their 2018 album Love Yourself: Tear, but it was Jungkook's entrance that really stole the show that night. He walked down the runway like he was Beyoncé, and it was so awe-inspiring that someone decided to overlay Beyoncé's hit song to Jungkook's power walk on stage. Of course, this became a meme almost instantly, and naturally, Twitter delivered.

Many users wrote hilariously relatable text alongside the clip of Jungkook's fierce walk:

Others found that the meme summed up literally everything about going to school:

Does anyone else relate to these on a spiritual level? Because I sure as hell do.

Let's also not forget that the boys' album Love Yourself: Tear is up for a Grammy award for Best Recording Packaging.

Basically, Jungkook, Jimin, V, Suga, RM, Jin, and J-Hope are shaking up the music game in a big way, and I have to say I *don't* hate it at all.

If you've been a part of the BTS ARMY since day one, then you'll know how to get tickets to the BTS Love Yourself concert movie, which is scheduled to hit theaters for one day only on Jan. 26. In the BTS World Tour Love Yourself in Seoul concert film, you'll get to see BTS' performance of their first Love Yourself tour concert at the Olympic Stadium in Seoul, South Korea.

According to the film's website, the movie will hit theaters for one day only and will showcase BTS in a way you've never seen before:

Now, if you'll excuse me, I'm going to walk around my apartment Jungkook-style while listening to Beyoncé, because that's just the kind of day I'm having today.

More like this
These BTS x McDonald's Meal Memes Will Crack ARMYs Up
By Michele Mendez
These Videos Of BTS Messing Up & Recovering Flawlessly Prove They're Master Performers
By Michele Mendez
Why Did Addison Rae Deactivate Her Twitter? Fans Think This Is The Reason
By Brandy Robidoux
Stay up to date