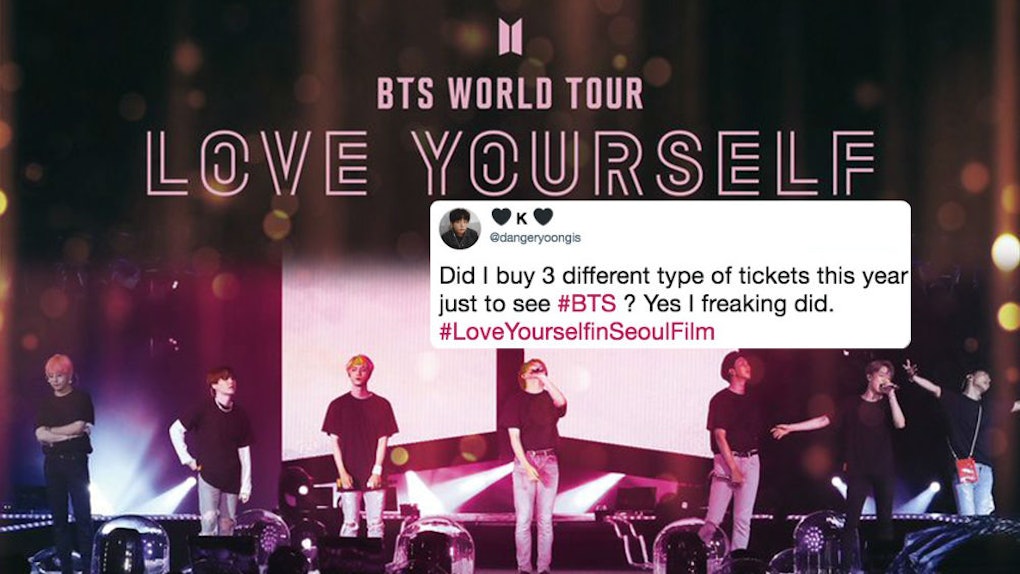 These days, it feels like you have a better chance of receiving a certified letter from Hogwarts via Owl Post inducting you into the Wizarding Class of 2019 than you have of scoring tickets to a BTS concert. Let me tell you: Those babies sell like hot cakes. That's probably why the geniuses over at Big Hit Entertainment decided to throw ARMY who weren't lucky enough to snag tickets to their Love Yourself World Tour a bone with the BTS World Tour Love Yourself in Seoul concert film. The movie, which Big Hit announced on Twitter on Dec. 13, will basically drop you right into the Olympic Stadium in Seoul, South Korea where BTS performed their first Love Yourself tour concert, only at your local theater. Here's how to get tickets to the BTS Love Yourself concert movie so you can pretend you actually got to see the boys live on the history-making tour.

According to the film's website, here's what you can expect from the movie, which is scheduled to hit theaters for one day only on Jan. 26:

One day only? ONE DAY ONLY? Big Hit really knows how to make the ARMY scramble, am I right? This is gonna be the ARMY in every theater across the nation on Jan. 26, for sure:

Anyway, hopefully you're free on Saturday, Jan. 26, because that's definitely the most important part of making sure you're in attendance when this sure-to-be epic film hits theaters. If your calendar is clear, here's how to snag tickets so you don't miss out!

First of all, tickets for BTS World Tour Love Yourself in Seoul are expected to officially go on sale sometime on Monday, Dec. 17, at which time you'll be able to see a complete list of screening locations on the movie's website or on the Fathom Events website (much like the boys' other movie, Burn The Stage: The Movie).

In the meantime, it seems some theaters have already started selling tickets, so don't let the fact that tickets aren't "officially" on sale stop you from checking out your local theater's listings and seeing if pre-sale tickets for BTS World Tour Love Yourself in Seoul are available for purchase. AMC is already selling tickets here. You can already buy tickets at Regal Cinemas, too, by clicking here.

BTS World Tour Love Yourself in Seoul will be screening in 90 countries worldwide (including the U.S.), according to PRNewswire. If you don't see a screening in your location initially, your best bet is to keep refreshing the official list of screenings on the official website and the Fathom Events page, because participating theaters are subject to change at any time.

Now, if you'll excuse me, I need to go start furiously refreshing the Love Yourself In Seoul website so that I can snag my tickets immediately when pre-sale starts.