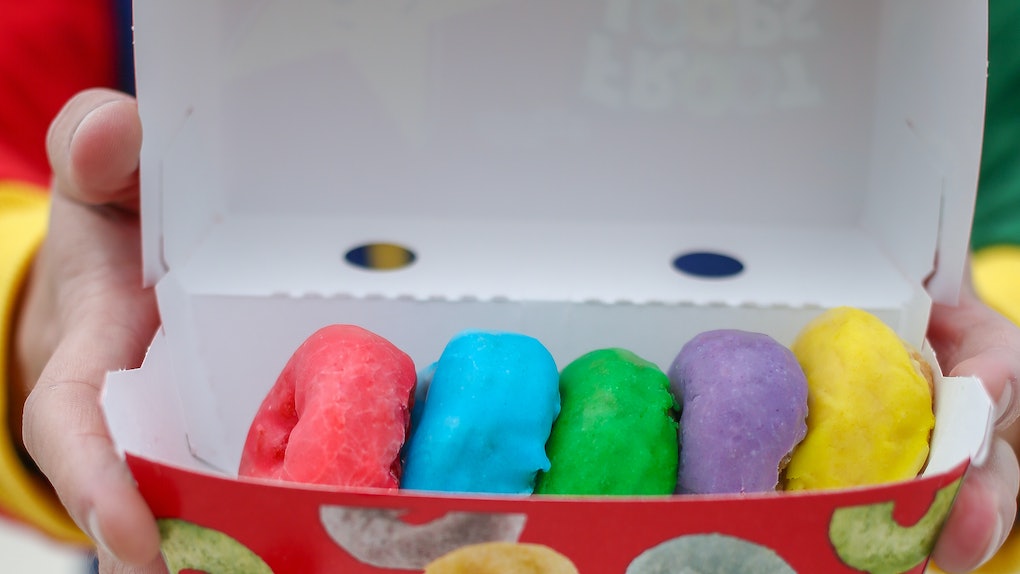 These Hardee's & Carl's Jr. Froot Loops Mini Donuts Are Back For A Colorful Start To Your Day

Maybe you prefer to start your day with a quick jog, some pushups, and a green juice. Or you might simply snooze your alarm two (or eight) times before willing yourself to actually wake up and get ready for work. But I — personally — thoroughly enjoy starting my day with a flash of bright color. So, you could definitely imagine how happy I was to hear that Hardee's & Carl's Jr. Froot Loops Mini Donuts are back. They look (and taste) just like the classic breakfast cereal, and I am seriously all about it.

If you're on the west coast, you've probably stopped by a Carl's Jr. on some of those long AF car trips to your grandparent's house (or maybe that's just from my personal experience), and if you're Midwest-based or in the Southeast, you probably did the same exact thing for its sibling chain, Hardee's. Either way, the renowned fast food chain is relaunching their limited-edition Froot Loops Mini Donuts on Feb. 25 at participating Hardee's locations, and they'll be available at participating Carl's Jr. locations on Feb. 27, according to a press release. They look and taste just like your favorite sugary breakfast cereal, coming in the five iconic colors: red, blue, green, purple, and yellow. One pack only costs $1.99, so it pretty much goes without saying that I — for one — am pumped beyond belief.

You may be shocked to hear this actually isn't the first time the chain is selling the utterly divine Froot Loop Mini Donuts. Back in August 2018, Carl's Jr. and Hardee's teamed up with Froot Loops to release the colorful and sweet innovation for the first time ever, and let me tell you, they were all I ate for about a week.

Sadly, they were only around for a super limited time, but now that they're being brought back (again, for a limited time), I'm led to believe they could probably return once again, in the near future. I'm so grateful that they're back to bless all of my mornings with their gorgeous colors, glorious amounts of sugar, and — of course — that irresistible Froot Loops aesthetic. This is truly a '90s kid's dream come true.

If you just can't get enough of Toucan Sam's greatest creation, two versions of Froot Loops' edible straws came back for a limited time last year, and they were the perfect addition to every iced coffee, cranberry vodka, and — most importantly — glasses of milk. They came to combat the plastic straw ban that swept the nation in 2018. Twitter user @AlexHughesie suggested that Kelloggs bring them back. His tweet went viral, and someone even made a Change.org petition called "Bring back Froot Loops Cereal Straws." Over 12,000 people signed it, and eventually, the cereal giant was persuaded to bring back the iconic favorite.

Froot Loops are hard to beat — everyone knows that. But as they say, "if you can't beat 'em, join 'em." So I'm guessing that's why Carl's Jr. and Hardee's decided to team up with the unstoppable breakfast cereal. The result is beautiful and delicious, so you should really make a point to get 'em while you can. Adding a little color to your day never hurt anybody.

Editor's note: A previous version of this story listed Feb. 19 as the donuts' release date. The release dates for the Froot Loops Mini Donuts have been updated for both Hardee's and Carl's Jr. locations, per the latest press release.