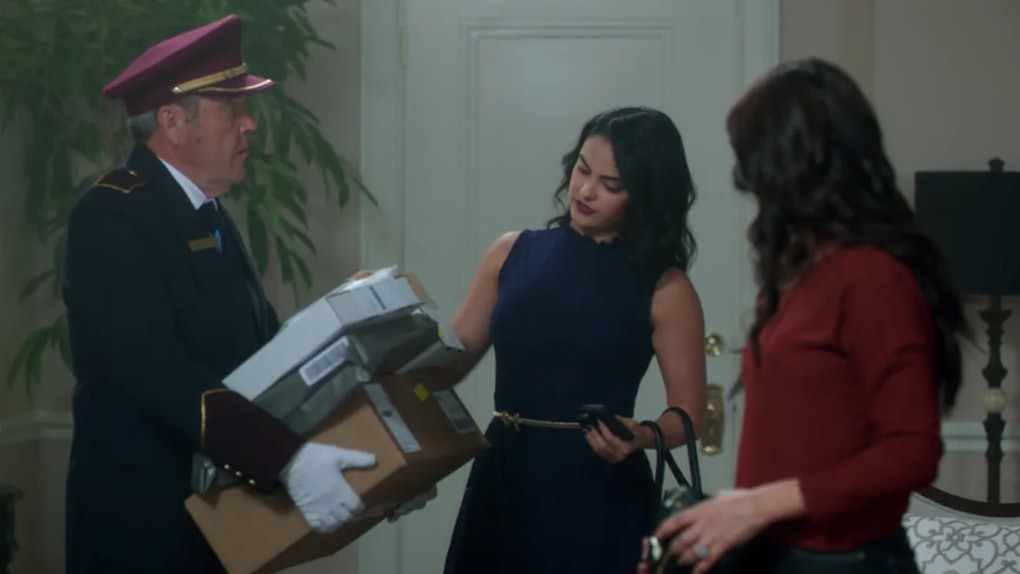 It's hard to pinpoint the most bizarre thing about Riverdale, because the CW series is just so out there. With teens catching serial killers, teachers hooking up with their students, and possible alien abductions, each season gets a little more outlandish in the best way possible. While there's so much to love about the soapy drama, the fake Riverdale brand names seen throughout the series are one of the most beloved jokes to anyone who considers themselves an honorary member of the Core Four.

Since the show's 2017 premiere, fans have found the clever brand tweaks to be some of the silliest easter eggs in the series. Basically, the writers change well-known brand names to make the Riverdale versions hilariously on the nose. While it's unclear how they choose which names to change and which ones to keep, catching a new thing that got Riverdale-d is always a fun surprise.

As you're watching Archie, Betty, Jughead, and Veronica hook up with each other and try to save Riverdale from seemingly endless darkness, keep your eyes and ears peeled. From candy to luxury goods, no brands are safe in the creative minds of the Riverdale writers. Here are a few of the most iconic ones fans still get a kick out of today:

“Reporting my American Excess card as stolen? Well played," Veronica told her mom when the two were battling it out in Season 1. Not to be confused with an American Express card, an American Excess sounds like one that just begs to be spent on unnecessary splurges.

When Archie can't find his dad's wallet after Fred got shot at Pop's during Season 2, Veronica picks up a new one from Barnaby's, not Barney's, for him to use in the meantime. (Well, she sends the family butler Smithers to get it, but it's the thought that counts).

Move over, The Hardy Boys. The Riverdale version of the series, The Baxter Brothers, are a little more twisted but still follow the same general idea: Teens somehow solve crimes that adult law enforcement professionals can't!

Nobody lays a finger on Butterfingers in the town of Riverdale... because they munch on Butterflingers instead.

While a bean and a beluga whale might not seem like the most luxurious trappings of fine dining, if Riverdale's take on the New York bakery Dean & Deluca is good enough for Veronica Lodge, it's good enough for me. Just make sure to pick up her favorite brunch item: a chocolate almond croissant.

If you have a flat tire or need a tow in Riverdale, don't call AAA; call CCC (or "Triple C") for a lift.

If you thought landing on the Forbes "30 under 30" list was goals, Veronica's aspiration of getting on Fibes "20 Under 20" is even loftier.

“It’s not the Waldorf nor the Plaza, but The Five Seasons, like all of Riverdale, has its charms,” Veronica said in Season 2, and the Riverdale equivalent of The Four Seasons has come up time and time again as the must-stay lodging site in Riverdale.

When playing Griffins & Gargoyles, people would drink "griffin blood" (aka a punch sometimes mixed with poison) from a "sacred goblet" to prove their worthiness. Since this is Riverdale, instead of Kool-Aid, Fresh-Aid is the fruity drink of choice.

In Riverdale, when you want to get your online shopping on, you go to Glamazon (not Amazon) for essentials and unnecessary treasures alike.

Popping up time and time again in the series, Glamergé eggs are just as elusive (and expensive) as Fabergé eggs are IRL.

When Kevin starts wandering Fox Forest for hookups in Season 2, Betty suggests he use Grind’em (you know, like Grindr) instead.

Why would a girl ever shop at Macy's when she could just swipe her mom's Lacy's card à la Veronica. Plus, V's pal Katy Keene works there, so it's a win-win.

Little Ciceros is the go-to spot to order pizza in Riverdale. Just don't confuse it with Little Caesars, since I'm pretty sure that doesn't exist in this universe.

According to Kevin in the very first episode of the series, tailgate parties in the Mall-Mart (you know, like Walmart) parking lot after Friday night football games are a vital part of Riverdale's social scene.

Grab your wine and your charcuterie board, because Riverdale's version of The Bachelorette is probably just as dramatic.

It might not be Sarah Lawrence, but Sarah Florence College is still a big deal, especially because that's where Archie's mom went to school and made a lot of influential friends.

Riverdale is known for changing up the name of candies; in this case, Junior Mints graduated to Senior Mints.

Judging by the Carrie musical and Shankshaw Prison (where F.P. Jones is held after Jason Blossom's murder), it appears the Riverdale writers are big fans of Stephen King.

Airbnb might want to take marketing tips from The CW, because Riverdale's version of the home rental service, Sharebnb, has a nice ring to it.

Break me off a piece of that Skit-Scat bar!

A Spiffany's bag is the Riverdale equivalent of a little blue box from Tiffany's.

Twizzlers are Swizzlers in Riverdale, and the red candy is seen being eaten multiple times in the series, so it seems to be just as popular onscreen as it is IRL.

I don't know who is especially thankful for Thursdays, but in the town of Riverdale, the popular chain restaurant goes by TGI Thursdays instead of TGI Fridays.

Who needs 3 Musketeers when you can have a pirate-themed candy called 3 Buccaneers ?

Riverdale's best chewing gum added another bubble, so you can pop some Triple — not Double — Bubble when you're in town.

A Tucci bag is just as coveted as a Gucci bag in Riverdale, especially when it's monogrammed and filled with cash like the one the police found that implicated Hermonie Lodge in Season 4.

The best thing about 23 Hour Fitness is that you don't feel bad about not using your gym membership 24 hours a day, since it's open one hour less than its IRL counterpart.

In Season 1, Veronica was faced with the "impossible situation" of being invited to both the Vanity Flair Oscar party and Elton John's Oscar party on the same night, a horrid fate I wouldn't wish on even the Gargoyle King.

The Blue & Gold might be the go-to high school paper, but the Wall Beat Journal is the ultimate source for hard-hitting news in Riverdale.

Riverdale airs on Wednesdays on The CW, so watch it then if you want to find even more bizarre brand names.