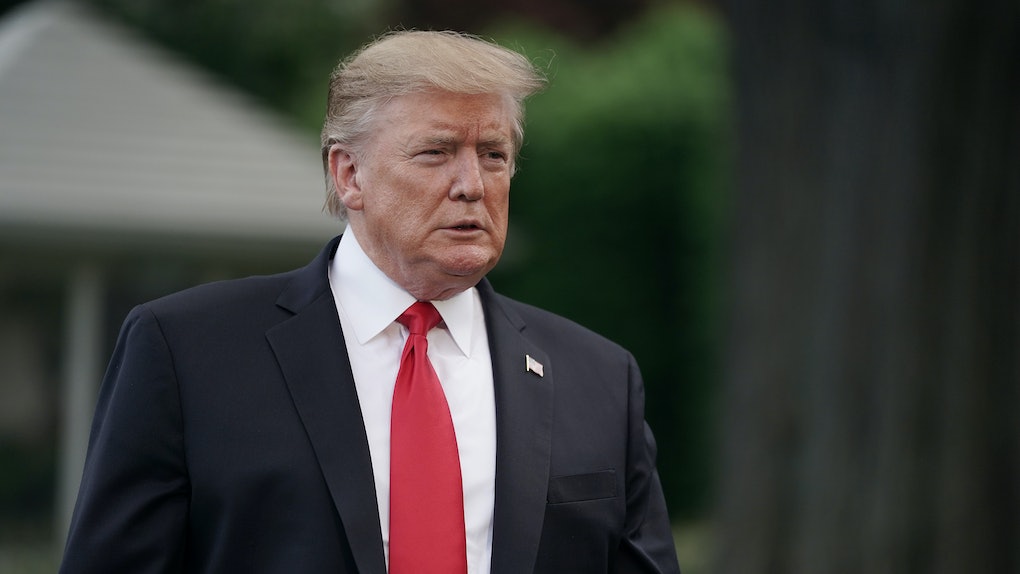 These Donald Trump Quotes About Abortion Show His Changing Thoughts

Around the country, abortion laws are changing. While some politicians remain consistent about where they stand on reproductive rights, others aren't so clear. Take President Donald Trump, for example, whose views on abortion have changed, shifted, and developed overtime. These Donald Trump quotes about abortion show his thoughts, and they aren't always consistent.

According to The New York Times, as of May 17, eight states have passed bills in 2019 to limit abortion rights. In mid-May, Alabama legislators voted to ban abortions in almost all cases, and other states like Mississippi, Georgia, Ohio, and Kentucky banned abortions after around the six-week mark, before many people know they're pregnant. Many politicians and public figures on both sides of the aisle spoke out against the various bans. Democratic Senator Elizabeth Warren spoke about the Alabama abortion ban, tweeting: "This is a full-scale attack on women's health." Conservative Fox Nation host Tomi Lahren also condemned the Alabama abortion ban, tweeting "this Alabama abortion ban is too restrictive."

But what is President Trump's take on abortion and the recent wave of abortion bans in general? Though the president has generally said he's "pro-life," here are some quotes to shed some light on the president's views, because they've changed, and kind of a lot.

Most recently, Trump took to Twitter to explain what his "pro-life" stance looks like. In a tweet on May 18, shortly after Alabama passed a bill banning abortion in nearly all circumstances, including rape and incest, on May 15, Trump said he's "strongly pro-life" with the exceptions of rape, incest, and "protecting the Life of the mother - the same position taken by Ronald Reagan." (Reagan, The Washington Post notes, was a little more nuanced than that.) He wrote,

As most people know, and for those who would like to know, I am strongly Pro-Life, with the three exceptions - Rape, Incest and protecting the Life of the mother - the same position taken by Ronald Reagan. We have come very far in the last two years with 105 wonderful new

In a following tweet, Trump celebrated his administration for its "whole new & positive attitude about the Right to Life."

He said clinics need to "stop with the abortions."

In an August 2015 Meet the Press interview before he was elected president, Trump told Chuck Todd he wouldn't fund Planned Parenthood unless it stopped "with the abortions." He told Todd,

Planned Parenthood has to stop with the abortions. A lot of people consider it an abortion clinic. I think those tapes that I saw over the last — the five tapes or the six tapes, I think they were outrageous. I think they were terrible, disgusting by any standpoint. And they have to stop.

In a February 2016 primary debate on CBS, Trump echoed his sentiments and added that while Planned Parenthood does "wonderful things," he didn't think it should provide abortions.

While delivering his 2019 State of the Union speech, Trump called for a culture that "cherishes innocent life."

“And let us reaffirm a fundamental truth: All children — born and unborn — are made in the holy image of God," he continued.

According to TIME, Trump made the comments while calling for a ban on “the late-term abortion of children who can feel pain in the mother’s womb." Medical professionals have called the term "late-term abortion" a misnomer, noting that there's no medical definition for an abortion later in pregnancy. The question of whether a fetus can feel pain and at what point is still unproven.

He's suggested people who have abortions should be punished.

Trump said this while speaking to MSNBC's Chris Matthews in March 2016, according to Vox. Matthews asked him, "Do you believe in abortion or no as a principle?"

Trump responded, "The answer is there has to be some form of punishment." When Matthews asked if he meant "for the woman," Trump appeared to say yes and nod.

He hastily walked back on the comments hours later, though, after receiving widespread backlash. A spokesperson for Trump shared a statement, as tweeted by an NBC News reporter, saying abortion issues should rest with states. "Like Ronald Reagan, I am pro-life with exceptions, which I have outlined numerous times," the statement continued.

His campaign put out a more formal statement regarding abortion about an hour later that said punishment should be levied at abortion providers instead of women. It said in part, “If Congress were to pass legislation making abortion illegal and the federal courts upheld this legislation, or any state were permitted to ban abortion under state and federal law, the doctor or any other person performing this illegal act upon a woman would be held legally responsible, not the woman.”

But then, on April 1, 2016, Trump appeared to change his position on abortion again. Speaking to CBS News, he said, "The laws are set now on abortion and that's the way they're going to remain until they're changed."

When asked whether he thought abortion is murder, Trump said, "I have my opinions on it, but I'd rather not comment on it." He finally offered up a response following some back-and-forth over the question, though, saying, "No, I don't disagree with [the proposition that abortion is murder]."

But he hasn't always made the issue a priority.

Years before that, Trump was singing a totally different tune. Sitting down for an interview on the Howard Stern Show in 2013, Trump said that abortion isn't exactly at the top of his worry list. "I mean, I feel certain ways about things, and is it a priority for me? Because my priority has always been China and jobs," he said, according to BuzzFeed News. "You know, I've never really been exposed to that. And that's always been my view, to be anti. But, you know, with obviously, with passes, rape and this."

According to CNN, Trump also said on the show that abortion has never been his "big issue." He added, "Somebody asks me, and I say pro-life, but it's never been an issue that really has been discussed with me in great detail."

Years ago, he called himself "very pro-choice."

Abortion bans didn't appear to be on his mind at all back in the '90s. On Oct. 24, 1999, Trump shared his stance on abortion in an interview with NBC News, and it's a complete 180 compared to his present one. While he admitted that he "[hated] concept of abortion," he maintained that the decision should totally rest with the parents.

“I’m very pro-choice,” Trump told journalist Tim Russert at the time. “I hate the concept of abortion. I hate it. I hate everything it stands for. I cringe when I listen to people debating the subject. But you still — I just believe in choice.”

He went on to defend his liberal position by explaining that he grew up in New York, where he said there is a "different attitude" than other parts of the country.

Later, when asked if abortion should be limited in the third trimester, Trump firmly replied, "No."

Speaking to Fox News that same month, he said he wanted the abortion issue "removed from politics," adding, "I believe it is a personal decision that should be left to the women and their doctors."

Times have really changed, right? The shift appears to have happened between 1999 and the early 2010s. Trump opened up about the switch during a 2015 debate, saying, per The Washington Post:

[W]hat happened is friends of mine years ago were going to have a child, and it was going to be aborted. And it wasn’t aborted. And that child today is a total superstar, a great, great child. And I saw that. And I saw other instances.

Considering how much he's teetered on the issue, it seems like there's a chance he could flop back to the pro-abortion rights side in time — even if it's a small shift. Only time will tell.