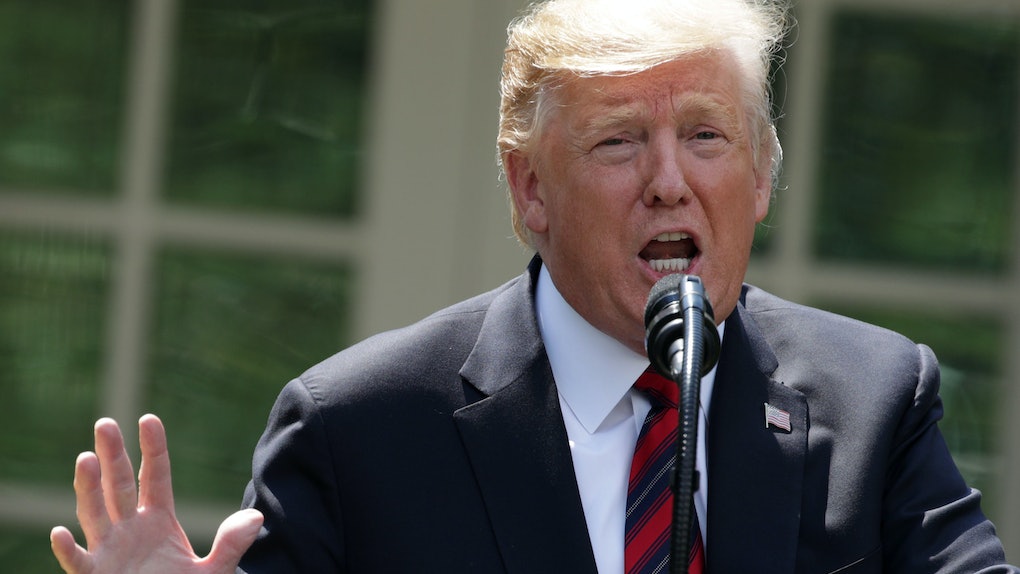 Just days after Alabama controversially passed what might be the country's most restrictive ban on abortion, the president appeared to address the recent wave of restrictive anti-abortion laws in Georgia and Missouri in a series of tweets on Saturday, May 18. While seemingly breaking his silence on the Alabama law, which restricts abortion even in cases of rape and incest and makes it a felony to terminate a pregnancy, the president appeared to distance himself from the contentious new legislation. Following fellow Republicans who've expressed concern for the extremity of the new law, Donald Trump's tweet about his position on abortion shared his stance on the issue.

Shortly before midnight on Saturday, May 18, the president joined fellow members of the GOP like Senate Majority Leader Mitch McConnell (R-Kentucky), Sen. Mitt Romney (R-Massachusetts), and Sen. Tom Cotton (R-Arkansas) in subtly disassociating himself from the restrictive new law, which has led to backlash around the country. According to findings from a 2018 Gallup poll, 77% of Americans believe abortions should be legal during the first trimester in cases of rape, incest, and risks surrounding the mother's life, and the president appeared to try to appeal to his constituents by clarifying his personal stance and hinting that he thought the Alabama law had gone too far. Trump began his tweet, saying:

As most people know, and for those who would like to know, I am strongly Pro-Life, with the three exceptions - Rape, Incest and protecting the Life of the mother - the same position taken by Ronald Reagan.

His message then turned to advising fellow members of his party to look ahead to the future of the anti-abortion movement.

He continued, "We have come very far in the last two years with 105 wonderful new Federal Judges (many more to come), two great new Supreme Court Justices, the Mexico City Policy, and a whole new & positive attitude about the Right to Life."

He then referenced a point made in his 2019 State of the Union address, which criticized Virginia and New York for considering legislation removing obstacles from obtaining an abortion in the third trimester of a woman's pregnancy in rare cases where the pregnancy is life-threatening for the mother (Virginia's proposed bill failed to pass, and Gov. Andrew Cuomo signed New York's Reproductive Health Act into law on Jan. 23, 2019). Trump added, "The Radical Left, with late term abortion (and worse), is imploding on this issue. We must stick together and Win for Life in 2020. If we are foolish and do not stay UNITED as one, all of our hard fought gains for Life can, and will, rapidly disappear!"

Trump's comments appear to caution Republicans from pushing for more extreme anti-abortion legislation, such as the one that was implemented in Alabama that doesn't account for rape and incest. It appears to be a divisive and deeply unpopular policy among people in the state, which is reflected in data from a 2018 poll conducted by Anzalone Liszt Grove Research that found 65% of Alabama residents believe in limited abortion access in the cases of rape, incest, or if the life of the woman is in danger. In addition, an April 2019 poll from the Kaiser Family Foundation found that two-thirds of the public does not support the overhaul of Roe v. Wade, according to The Washington Post.

As of now, Georgia, Kentucky, Mississippi, and Ohio are among the states that have implemented controversial and restrictive anti-abortion laws that prohibit women from terminating their pregnancy after a fetal heartbeat can be detected. As Politico points out, the latest Alabama law is setting the stage to make reproductive rights one of the biggest issues in the 2020 presidential election. With Trump's tweet on Saturday night, it looks like the president is letting his future Democratic challenger know where he stands.