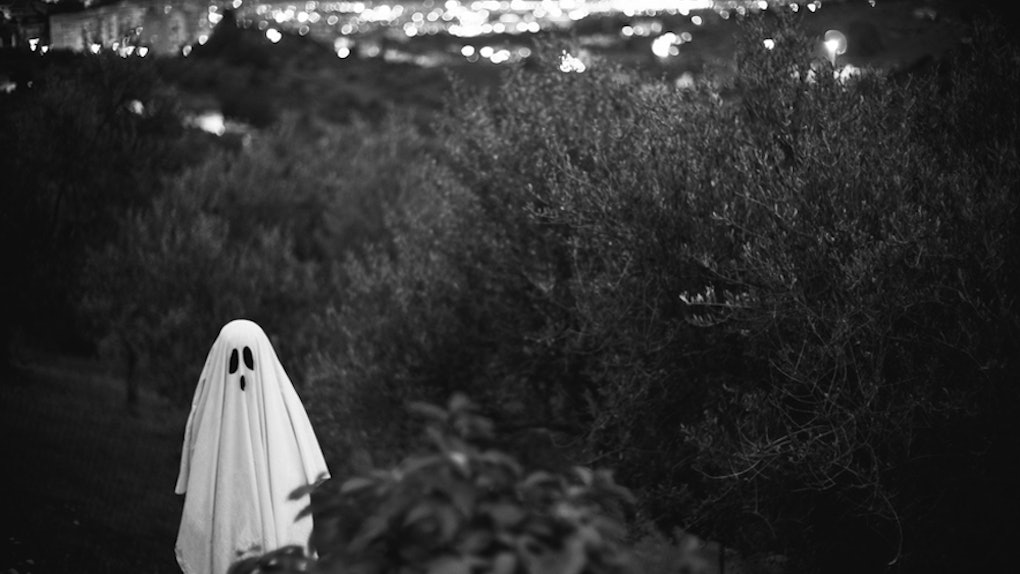 "Dear David" is the 21st century ghost story that makes the internet collectively stop in its tracks. No one can resist updates from the artist who claims the malicious spirit of a little boy haunts his home, but there are definitely a few loose ends that need to be tied. These "Dear David" conspiracy theories will have you wondering if this little boy is real, or just the star behind one of the greatest viral sensations of all time.

New York City-based artist Adam Ellis decided to update his followers on the paranormal activity taking place in his apartment, and it's certainly been a wild ride for everyone tuning in (and Ellis). Here's the spooky 4-1-1: A young boy name David with a disfigured head appeared to Ellis in a nightmare... but that's definitely not where he stayed.

Those nightmares quickly became a reality (according to the footage on Ellis' Twitter thread). David decides to make his presence known by sitting in the chair Ellis keeps in his bedroom, moving objects on the coffee table, and so on. Each encounter leaves the BuzzFeed artist "paralyzed with fear," and he believes David could possibly have malicious intent.

So how did this all come to be? In one dream, Ellis was warned that he is only able to ask David two questions — the third would lead to horrific consequences. He must ask each in the form of "Dear David," and thus our favorite spooky Twitter phenomenon was born.

There have been very eerie photos of David.

Some of David's objects began to appear in the apartment.

One close-up photo completely threw the internet for a loop.

And, of course, throughout this whole ordeal, people began wondering if "Dear David" was legitimate. I'll be honest here: For Ellis' sake, I hope this is just a ruse, but when it comes to my personal online entertainment, I cannot part ways with "Dear David." There is nothing I love more than a good ghost story, and I am in a Halloween state of mind year-round. I fell in love when I stumbled upon "Dear David," and part of me doesn't want to believe that can all be a hoax.

Some people decided to share their "Dear David" conspiracy theories... and my heart ached a bit.

Considering Ellis is an artist, it's safe to assume that he knows his way around Photoshop, and it's probably not terribly difficult for him to manipulate a photo or two. Considering he also has a book in the works, it's questionable if David has something to do with that book and project he alluded to on Instagram. In a post tallying his book pages, Ellis wrote,

I have a book coming out in 2018, and I've been keeping track of all the pages I've drawn on my wall. Me and my publisher set a goal of 100 pages but I'm hoping to have way more than that when my book is due in May. It's been a long journey and I'm only halfway done, but I'm really excited to share this book with all of you next fall. I also have a lot of secret projects happening next year that I can't talk about yet. 2018 is gonna be really exciting!!!

I will, of course, read and devour Ellis' book, but I am just going to stop theorizing and go back to doing what I love: letting the spirit of a young boy completely creep me out. Ellis took to Twitter to share one of his latest encounters and said,

It was a feeling I'm used to — it always accompanies David. People tweet at me a lot saying he might just need help, but I'm certain that's not the case. Every time he shows up, I feel a palpable sense of malice.

Until Ellis confirms or denies these theories, I'm going to enjoy the spooky effects of that "palpable sense of malice." Sorry not sorry.

More like this
These Tweets About “Disaster Girl” & Her $500K NFT Are Hype For Her Reward
By Cianna Garrison
TikTok's Viral Ranch Pickles Recipe Is A Big Dill, & So Are These Other Pickle Recipes
By Marisa Casciano
These Memes About Being "Cheugy" Include Some Hilarious Realizations
By Cianna Garrison
Stay up to date