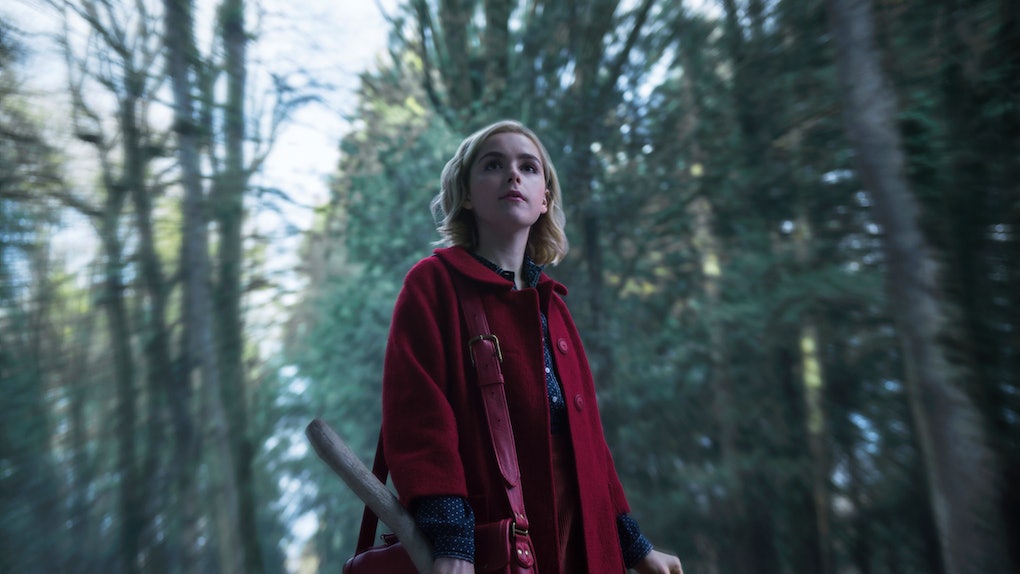 These 'Chilling Adventures Of Sabrina' Halloween Costume Ideas Are Witchin'

Even if you don't identify as a Halloween enthusiast, spending the last few days before the holiday with Netflix's Chilling Adventures of Sabrina will inevitably inspire a creepily autumnal mood. From Sabrina's aunts' cozy Victorian home near the eerie woods to the characters' often eccentric clothing, the show is essentially a Pinterest board of fall favorites come to life. If you're still struggling to find the perfect Halloween costume, these Chilling Adventures of Sabrina Halloween costume ideas will make you the talk of the night's witching hour.

Originally intended as a Riverdale spinoff on The CW, Chilling Adventures of Sabrina made the switch to Netflix with its Riverdale-esque tone still very intact. Sabrina Spellman's hometown Greendale is a neighbor of the titular town, but Sabrina's intriguing world will keep you from wanting to sneak out of town for a peek at Jughead and Archie. Nearing her sixteenth birthday, Sabrina faces the prospect of her dark baptism, meaning that she must renounce her ties to the mortal world, commit to serving the Dark Lord (no, he's not Voldemort), and accept her identity as a full witch. As the milestone approaches, she feels more inclined to decline this future, but there are mysterious dark forces planning otherwise.

The show's first season doesn't debut on Netflix until Oct. 26, but if you need to plan out your Halloween costume before then, we have your go-to list of Chilling Adventures of Sabrina characters to emulate this year. Good luck with your costumes, witches!

Prudence, Dorcas, and Agatha are Sabrina's adversaries in the magical realm, and although this foursome aren't likely to become best friends any time soon, the Weird Sisters' matching dresses are what dream group costumes are made of. Finding long-sleeved dresses in solid shades of purple, maroon, and blue ought to be easy enough, but you might need to track down a lace fabric to create collars and sleeves for your squad's complete look. You and your gals will also get to experiment with different hairstyles for each character, so if you've always wanted to rock the milkmaid braid, now's your chance!

Known in Greendale as a slightly odd high school teacher, Ms. Wardell changes her more reserved style in favor of tighter, more glamorous clothes when the season begins. Lean toward muted earth tones in this costume search, but the lack of color allows for a vibrant face of makeup. Ms. Wardell's makeup is a little reminiscent of the 1940s pinup style, so feel free to experiment with a bold red lip and thick black eyeliner. Top things off with luscious waves in your hair and your best evil eye prepared for the night ahead.

If you want a matching costume with your BFF or sister, dressing as Sabrina's guardians Hilda and Zelda is a perfect idea. Definitely the more traditional motherly figure, Hilda dresses in sensible cardigans and funky blouses, and wearing a blonde wig is a must to pull off her warm and friendly look. Focus on capturing Hilda's bubbliness in contrast to Zelda's steeliness.

The latter's style is more eccentrically fashionable than her sister's, favoring black outfits with accents of gold jewelry. Like Ms. Wardell, her hair and makeup clearly take inspiration from a more vintage era, so don't be afraid to be bold in that styling. Bonus points if you complete your Zelda costume with black nail polish and a cigarette holder. Hilda and Sabrina may be more subdued in embracing their inner witches, but Zelda clearly loves to capture her dark side in her clothing.

If you need another kind of group costume, consider the possibility of dressing like Sabrina, her boyfriend Harvey, and their friends. Like the majority of the Chilling Adventures of Sabrina characters, they usually appear in darker clothing that should be easy to find in a typical wardrobe. Sabrina's red coat and Harvey's flannel and brown jacket are musts, while Susie's green turtleneck and Roz's trench coat complement the drama's autumn tones. If you know people who plan to dress as the Riverdale gang, pairing these group costumes together allows for crossover magic that may not ever happen onscreen, as well as built-in promotion for a series that will still be quite new by Halloween night.

Think of this as a teenage Red Riding Hood look. With her trademark red coat and messenger bag, Sabrina heads into the woods with a bell and stick in tow when her future as a fulltime witch is imminent. This particular shot has been the show's main promotional image so far, so it's only right that if you're flying solo on Halloween, you should capture Sabrina's iconic look. Mad Men's Kiernan Shipka is so natural and strong in this role that Sabrina ought to be a fan favorite costume in 2019, but you can beat the world to it by trying out the look this year. Buy a shoulder-length blonde wig to go along with your red ensemble and get ready to plug this magical series to your friends all night long.

Season 1 of Chilling Adventures of Sabrina debuts on Netflix on Friday, Oct. 26.