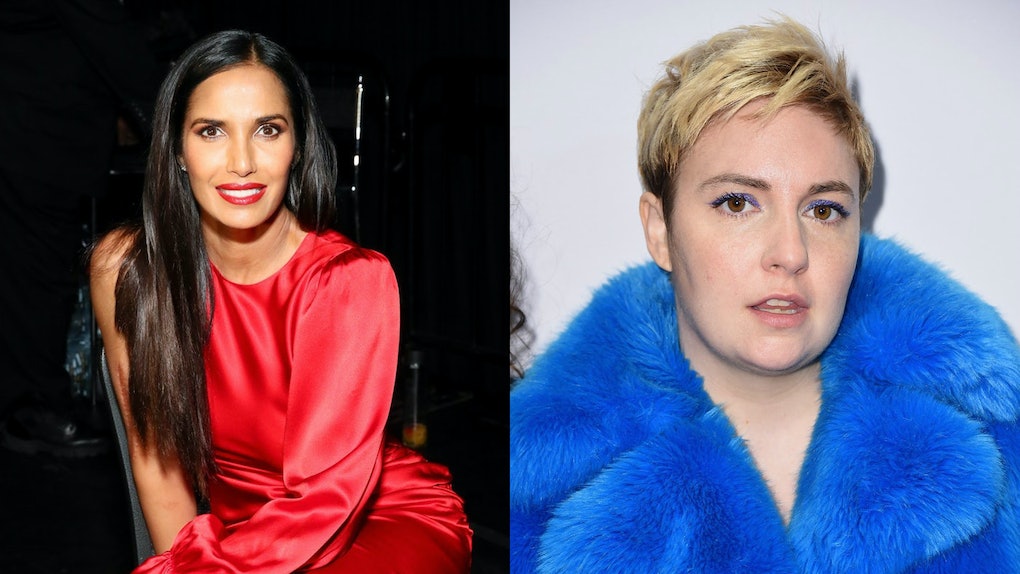 These Celebrity Quotes About Endometriosis Are So Candid & Inspiring

For years, I thought that my excruciatingly painful periods were normal. Any time I complained to someone about my cramps, they were sympathetic, but always said something like, "periods are the worst." I had never met anyone who had a history of endometriosis, or even suggested that I see a doctor in case my experience wasn't your run-of-the-mill menstrual awfulness. In recent years, I've watched more people open up about the condition. These celeb quotes about endometriosis journeys truly capture what it's really like to be someone with endo. By being vocal about how endo has affected their bodies and their lives, they have raised awareness so that, hopefully, fewer people have to suffer for years without a diagnosis.

Every person's experience with endo is a little different, and these celebrities capture a spectrum of ways that living with the health problem can make life challenging, lead to other conditions, and even inspire love for your own body — despite its limitations.

Padma Lakshmi on the difficulty of diagnosis

"I was told by my doctors that I had a ‘low threshold for pain’ and that I should just get used to it because there was nothing that could be done," said Padma Lakshmi, Top Chef judge and founder of the Endometriosis Foundation of America during a Variety Power of Women speech. "Well, it turns out I have a really high threshold for pain. Most women do, we have to." According to The Atlantic, doctors often don't take women's pain as seriously as men's, and getting an endometriosis diagnosis is no exception. Lakshmi explained, "Most women with endo don’t get properly diagnosed for a full decade. The only real treatment we have for endo is surgery or the pill."

"If any of you suffer from endometriosis please know you aren't alone. I know how excruciating painful it can be and how discouraging the disease can be," Halsey wrote in a long message to her followers on Twitter. "To feel like it's gonna limit you because of how debilitating it is," she shared. "To miss school and work, or even worse to GO and suffer through it anyway feeling like a prisoner in your own body."

Lena Dunham on getting surgery

In a 2018 essay for Vogue, Lena Dunham described how her experience with endometriosis led to having to have a hysterectomy. After the surgery, her intuition that something had been seriously wrong with her uterus was confirmed. "My uterus is worse than anyone could have imagined," she wrote. "It’s the Chinatown Chanel purse of nightmares, full of both subtle and glaring flaws. In addition to endometrial disease, an odd humplike protrusion," Dunham described, "and a septum running down the middle, I have had retrograde bleeding, aka my period running in reverse, so that my stomach is full of blood."

Tia Mowry on struggling with infertility

Having trouble conceiving a child or carrying them to term is one of the less-discussed side effects of endometriosis. In an interview with Parents, Tia Mowry-Hardict opened up about how, due to the condition, she had to seek the help of doctors and a nutritionist to get pregnant with her daughter. "Yes, despite my diagnosis I still wanted to try and have a baby," she said, "but not being able to have kids was an immediate fear. It made me feel out of control."

Daisy Ridley on having multiple symptoms at once

You might be familiar with common endo symptoms like severe cramping or pain during penetrative sex, but many other health issues can point to endometriosis. "I was in my flat going nuts, and then my skin got really bad with the stress of it all, and I hadn't been well," said Daisy Ridley in an interview for the ELLE Australia January 2017 cover story. "I had holes in my gut wall and stuff—and we were trying to figure out what to do with that because I'd felt poorly."

It can be easy to think that strength means pushing through pain. But to Julianne Hough, being strong includes caring for her body during endo flares — not just hoping the pain will go away. "My approach to [endometriosis] is not ignoring and suppressing it—being like, ‘I’m fine, I’m fine!’—but actually just owning it and embracing it," Hough told SELF in 2018. "For me, what it’s actually done is taught me how to have self-care. Instead of ‘Ugh, I wish I didn’t have this, and I’m in so much pain,’ [I say], ‘OK, what can I do to have a better life?’"