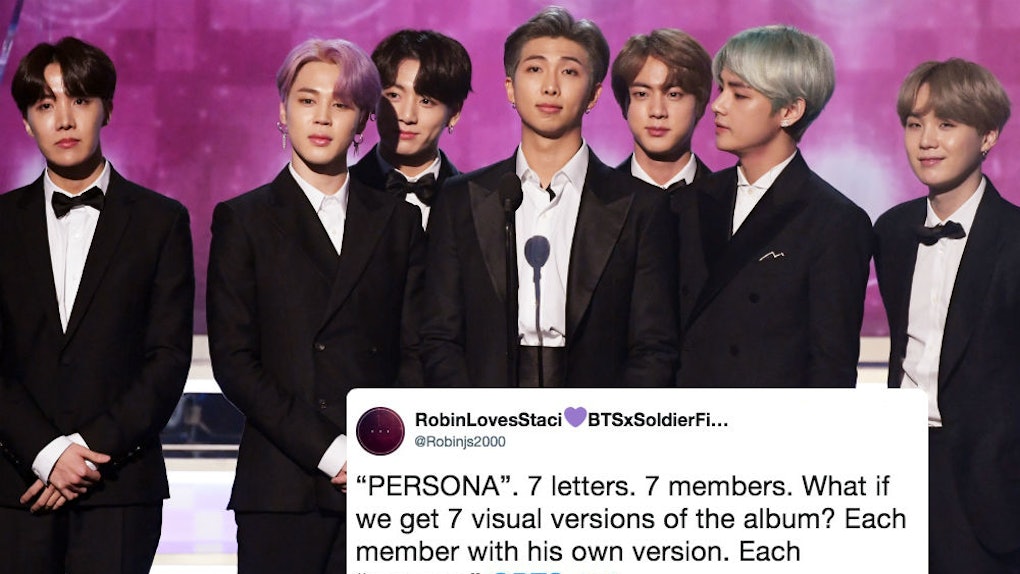 These BTS 'Map of The Soul: Persona' Fan Theories Will Make You More Excited For The Album

BTS just announced that their upcoming new album, Map Of The Soul: Persona, will be dropping on April 12, and will be available for pre-order on March 12. As in, tomorrow. Best. News. Ever. We are officially in comeback season, ARMY! Of course, now that we know the name of the album, the BTS Map of The Soul: Persona fan theories are here — and NGL, they are pretty fascinating!

But let's rewind for a sec: Although media outlets first started speculating in January that BTS — comprised of Jimin, V, RM, J-Hope, Jungkook, Suga, and Jin — would drop a new album in May, fans were alerted on March 11 that BTS album was coming way earlier on April 12 in a post on BTS' Fan Cafe. The big news was then confirmed in a press release sent to Elite Daily.

"Map Of The Soul: Persona marks the beginning of a new chapter, eight months after the release of Love Yourself "Answer,’" the statement read. "The album is scheduled for release globally on April 12, with pre-orders opening tomorrow."

Now onto the album theories.

For starters, fans on Twitter are convinced that BTS has been planning Map Of The Soul: Persona for a while now, since they noticed that Jin was wearing a shirt with the word "Persona" on it way back in the "DNA" era.

Pretty amazing. And we know how much BTS loves to drop hints so this totally makes sense. And get this: Many fans on Twitter are convinced that the word "Persona" is actually a reference to Carl Jung's map of the soul, a psychology theory that states the following:

The persona is the mask or appearance one presents to the world. It is not a pose or some other intentional misrepresentation of the self to others. Rather, it is the self as self-construed, and may change according to situation and context.

Now, check out some of the tweets:

Interesting stuff, right? In fact, Twitter is so into this theory, that the phrase "Carl Jung" is now trending worldwide.

Some fans think we may even get a seven-part series with the new album, since there are seven parts to the psyche according to Jung, and — wait for it — seven band members in BTS.

Is your mind now blown? Well, hold on... because there's more. It turns out Burger King — yes, home of the Whopper — apparently stans BTS, and the company decided to enter the fray and start tweeting about the new album drop and masks and revealing their truest self.

Honestly, I don't think I've ever seen anything more amazing.

Persona will be BTS' first release since they completed their Love Yourself album series last summer.

In addition to the new album, fans will get to see BTS on the road when they start hitting up stadiums across the world in May for their Love Yourself: Speak Yourself tour.