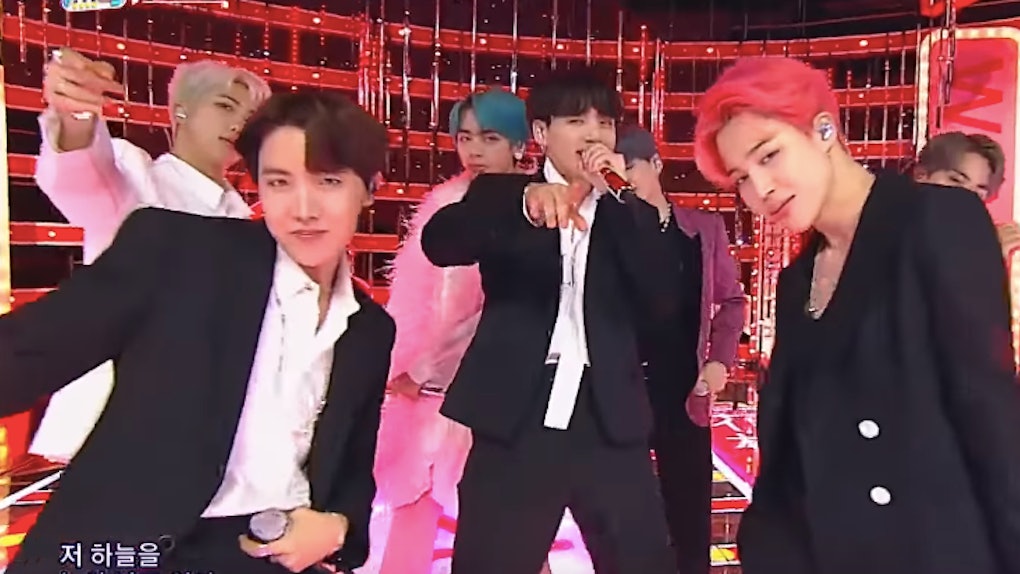 BTS recently released a new album, folks, and you know what that means — all their upcoming performances for the foreseeable future will be of new songs off the album. This is really good news if you are a big fan of their newest release, Map of the Soul: Persona, because not only are the songs on their latest album fun to bop to, but their performances of those songs so far have been out of this world. For example, BTS recently took the stage at Inkigayo, and the videos of BTS' Inkigayo performances of "Boy With Luv" and "Dionysus" are so mesmerizing you won't want to miss them.

In case you're unfamiliar, Inkigayo is a South Korean music show that airs weekly on Sundays and features some of the latest, hottest stars performing on stage. On Sunday, April 21, BTS performed at Inkigayo with DIA, Super Junior D&E, Stray Kids, IZ*ONE, EVERGLOW, PENTAGON, and more, and they delivered killer performances of two songs off Map of the Soul: Persona — "Boy With Luv" and "Dionysus."

In "Boy With Luv," RM, Jin, Suga, J-Hope, Jimin, V, and Jungkook took the stage, which was decorated with brightly colored lights, in classic suits and served up some serious dance moves during the set. In "Dionysus," the stage took a much darker tone with dimmer colors and a completely different feel from "Boy With Luv," but their four-minute set was equally mesmerizing and fun to watch.

But don't take my word for it — check out the two BTS performances from the April 21 Inkigayo episode for yourself.

If you were screaming along as loud as all the fans in the videos while you watched, I really can't blame you. As always, the boys really had the dance moves on lock, and TBH, I wasn't able to look away for one moment. While both of their performances were incredible, "Dionysus" was super intense, and it's was so awesome to see how the more upbeat "Boy With Luv" performance complements the other hit track from the album.

When it comes to performing songs off their new album, BTS does seem to favor "Boy With Luv," the new album's first track after the intro and "Dionysus," the last track on the album. On April 20, the boys performed at Music Core, another Korean music show similar to Inkigayo, where they got first place based on a ranking system that determines wins by physical album and digital sales, music video views, a viewers committee of 2,000 people who pre-votes, MBC radio broadcast numbers, and audience live voting. After BTS won, they gave the crowd an encore performance of "Boy With Luv" and, as you can imagine, ARMYs absolutely loved it.

BTS also performed "Boy With Luv" during their Saturday Night Live debut on the April 13 episode hosted by Emma Stone, a self-proclaimed K-pop fan. Because their album had just dropped a day prior, fans were freshly eager for the performance on an American stage — in fact, they were so eager that both Colin Jost and Emma Stone made jokes about the audience being all about BTS during the opening monologue and "Weekend Update."

I don't know about you, but I'm absolutely loving these BTS-filled times. Whether I'm watching them perform for American audiences on SNL or take the stage during a Korean music show or award show, it's just delightful to see these extraordinarily talented boys have fun and make fans swoon and melt wherever they go.