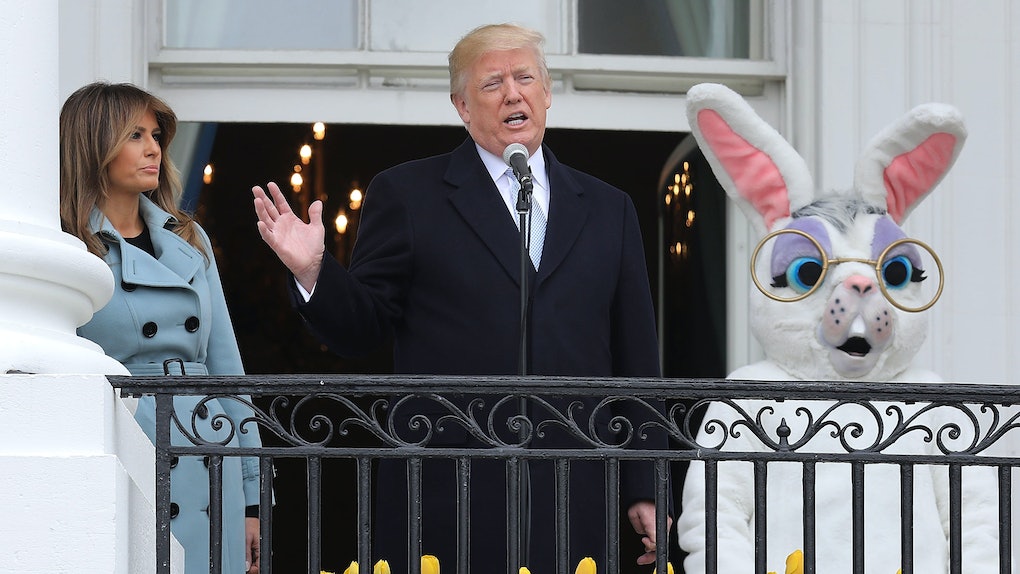 On Monday, April 2, thousands of families visited the home of President Donald Trump to celebrate the Easter holiday in keeping with tradition. This year marks the 140th anniversary of the White House Easter Egg Roll, which started in 1878, according to the White House Historical Association. But the video of Trump's 2018 Easter Egg Roll is one you can't miss.

The White House was expecting that 30,000 people would attend the event on the lawn, beginning at 7:30 a.m. ET. There were numerous other activities scheduled for the day besides the egg roll, including cookie decorating, eggs hunts, and a reading nook (more on that later).

The video, posted by Trump on Twitter, shows him addressing the crowd gathered outside the White House to kick off the day's events. (Did anyone else get flashbacks to the president viewing the eclipse?) But it might not have been exactly what kids (or the parents) were expecting to hear.

Assuming they weren't too distracted by the human-sized Easter Bunny standing next to the president to actually catch Trump's speech, attendees listening were in for a whirlwind ride. Apart from discussing the weather and thanking Melania for her work and the band for playing, Trump gave a hearty nod to the White House preservation staff. Specifically, he thanked everyone who works "to keep this incredible house, or building, or whatever you want to call it" in good working order.

"We keep it in tip-top shape," Trump said. "We call it sometimes, Tippy Top shape."

In just two minutes, Trump also managed to squeeze the topics of military spending and the economy into his Easter speech. (Because how better to honor the day that Jesus was resurrected?) All the while, Melania and the Easter bunny stood faithfully by.

Per a tweet by Deadspin's David Roth, "Trump keeps referring to the costumed Easter Bunny as either 'Gary' or 'Barry'," and tells the press that they're longtime friends.

He made zero mentions of the holiday itself during his airtime at the White House, but at least he's consistent. On Twitter, he spent Monday morning tweeting about DACA, NAFTA, Amazon, the FBI, and "fake news." (Though it's hard to tell where he fit all this tweeting into his busy schedule.)

And apparently he had more to say on his policy priorities. Per a video by NBC, Trump also talked to reporters about DACA, while children flanked him awaiting their autographs.

But back to that "tip-top shape" comment... Trump's comments about the White House on Monday were a real change of heart. In fact, it's practically a 180 from what he said in August, when he reportedly called the White House a dump. (To be fair, assuming he did, it wouldn't have been without merit. Apparently the presidential mansion was badly in need of repairs and plagued by ills including a rodent infestation.)

Despite a somewhat unorthodox beginning to the festivities, the rest of the White House Easter Egg roll seemed to go off without a hitch. I'd be remiss not to mention the reading nook portion of the event, featuring the likes of First Lady Melania Trump and members of Trump's cabinet. Press Secretary Sarah Huckabee Sanders, during her time in the spotlight, asked the children if they'd "eat lots of cookies and then go home with their parents on lots of sugar." (A great showing, no doubt, but they were hard-pressed to top Sean Spicer's reading last year. "So you've read this?" the former press secretary asked a boy at the reading. "Alright, don't tell me how it ends.")

Perhaps the most normal part of the whole Easter Egg fanfare was the commemorative egg. Anne Alonzo, President and CEO of the American Egg Board, tells Fox that the board traditionally presents the first lady with a commemorative Easter egg to mark the occasion.

Alonzo describes the 2018 egg, titled "Wings of Prayer," in all its bejeweled, pastel-colored glory: a man-made bridge holds tiny figurines of the president and first lady, while a tiny koi fish swims below. Apparently, it's quite an honor to design the commemorative egg, and the artist applicant pool is pretty competitive (naturally).

"It's made of out rhinestones," Alonzo describes. "[The artist] was inspired by the elegance of the first lady, and the tranquility that will occur before the White House Easter Egg roll."

On subject matter alone, Monday might not have been quite the tranquil homage to the religious holiday that the artist was hoping to convey, but honestly, who doesn't love a good bedazzled egg?