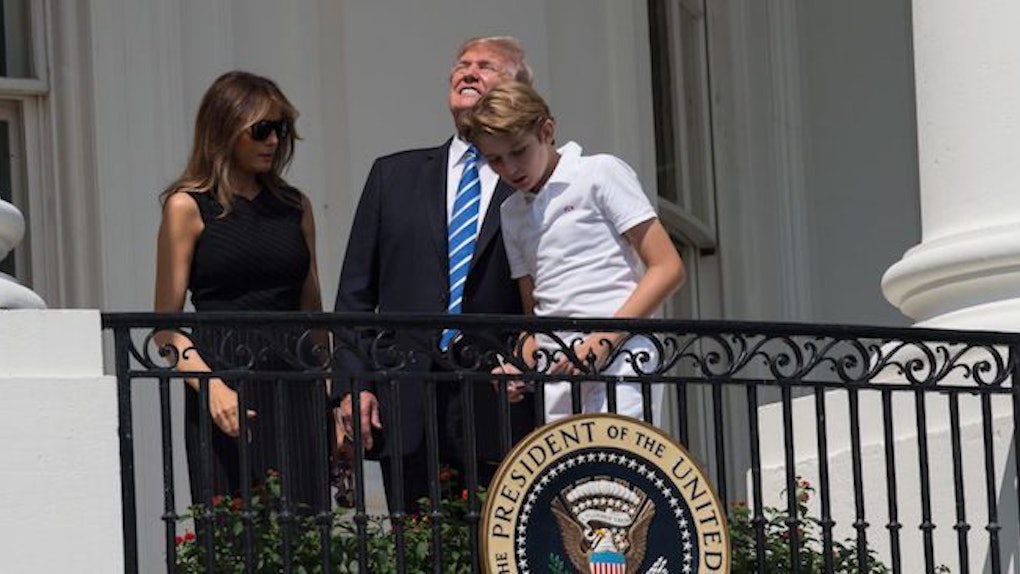 President Donald Trump looked at the sun during the solar eclipse on Monday, Aug. 21, because of course he did. This is a man who's said climate change was a hoax created by the Chinese. You think he fully listened to the warnings from experts about the damage staring at the sun could do to your eyes? No way. That's not how Trump rolls -- he lives on the edge. There are a lot of tweets about Trump looking at the sun during the eclipse and the image seems to be the internet's favorite new thing. Staring at the sun during a solar eclipse can do serious, permanent damage to your eye. There were numerous warnings it's the last thing anyone should do during the eclipse. Trump, however, apparently didn't feel the need to exhibit caution as he enjoyed the eclipse alongside his wife and son. The president was apparently wearing protective glasses at first, but ultimately decided to take them off, according to footage from NBC News. This was not a very intelligent decision. With that said, you can hardly blame people on social media for how they reacted.

Twitter is absolutely obsessed with this image of Trump looking at the sun during the eclipse.

Some are cutting the president some slack, given they looked at the sun without the proper protective glasses as well.

But just so we are clear on this, looking directly at the sun is never good for your health. This is not FAKE NEWS nor is it a hoax created by the Chinese or any of America's other geopolitical foes. With that said, if you took a quick peek at the solar eclipse today, don't beat yourself up. You probably did not go blind. Also, the president did it so you have a good excuse (but the president is also currently Donald Trump, so yeah).