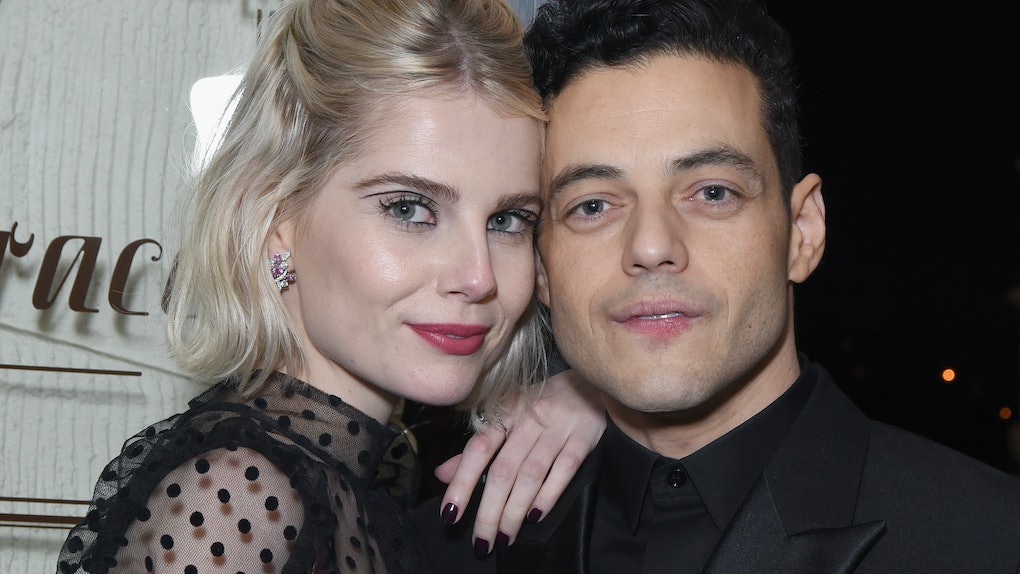 Rami Malek had a big night last night. The Mr. Robot actor took home the SAG Award for Male Actor in a Leading Role for his portrayal of the iconic Freddie Mercury in Bohemian Rhapsody, and as he stood up to approach the stage to accept the award, he shared a sweet moment with his co-star-turned-girlfriend, Lucy Boynton. And the video of Rami Malek kissing Lucy Boynton after winning his SAG Award is just the sweetest.

Malek was up against Viggo Mortenson (Green Book), John David Washington (BlacKkKlansman), Bradley Cooper (A Star Is Born), and Christian Bale (Vice) in the category for Male Actor in a Leading role. He took home the Golden Globe for his performance in Bohemian Rhapsody and has also been nominated for an Oscar for the role, so it's no surprise that he took home the actor statue on Jan. 27.

When his name was called, he stood and turned to Boynton (who played Mary Austin in the film) and planted a kiss on her cheek. It honestly looks like he was aiming for her mouth and missed, so that's funny, but he was a little preoccupied in that moment. So that's OK.

Fans really loved seeing one of Hollywood's newest couple together during the show, especially since they walked down the red carpet solo.

Malek has been raking in all of the awards this award season, and the general consensus is that he will also win an Oscar for this role. He's clearly been the frontrunner of the Best Actor category all season long, so if other award shows are any kind of precursor for what the Oscars have in store, Malek might be having a really great night on Feb. 24.

According to Us Weekly, just a few days before the 2019 Golden Globes, Malek seemingly confirmed his and Boynton's rumored relationship during his acceptance speech for the Breakthrough Artist Award at the 30th Annual Palm Springs International Film Festival’s Film Awards Gala (what a mouthful).

"Thank you, Lucy Boynton," he said in the speech. "You have been my ally, my confidant, my love. Thank you so much." My love?! That's big!! The two reportedly met on the set of Bohemian Rhapsody in 2017. In the film, Boynton's Mary Austin plays Freddie Mercury's muse/love interest. Ah, the classic case of co-stars who play love interests becoming each other's IRL love interests. Ya love to see it.

While he thanked Boynton for her love and support in his past speech, Malek's speech at the 2019 SAG Awards was all about Freddie Mercury.

“I thank Queen and Freddie Mercury,” Malek said as he accepted the award. “I get some power from him that is about stepping up and living your best life and being exactly who you want to be and accomplishing everything you so desire. I feel that, and he allows us all to feel that. So this is again for him.” I guess Rami Malek should also be thanking Freddie Mercury for helping him find somebody to love...