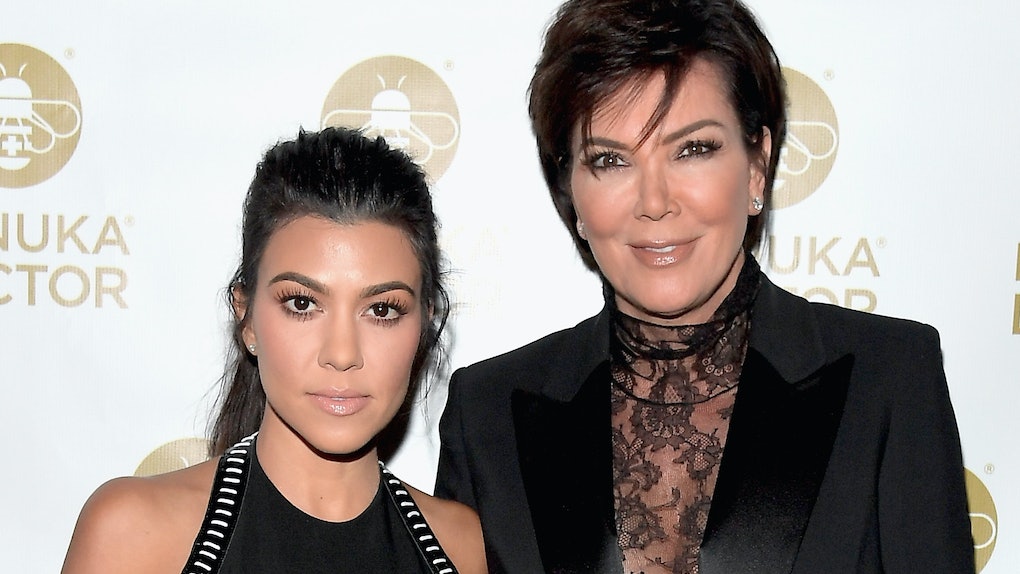 The Ellen Degeneres Show is especially fun to watch when there's a holiday coming up because it means loads of giveaways, celebrity appearances, and some awesome surprises. For Mother's Day this year, Ellen brought the mother of all mothers Kris Jenner on her show to reveal — you guessed it — some huge giveaways to members of the audience. Okay, that crosses off the celebrity appearance and giveaways, but what about the surprise? Being that it is almost Mother's Day, Kourtney Kardashian surprised her mother Kris Jenner with six of her grandkids, including Mason, Penelope, Reign, North, Saint, and Chicago. From the look on her face, Kris Jenner was totally not expecting that. You have to see the video of Kourtney Kardashian surprising Kris Jenner with her grandkids because it will make your heart melt.

In the video, Kris Jenner hugged and kissed each of her grandkids and of course, to make the meetup even more adorable, it was all set to the tune of The Supremes' "Baby Love." Is it just me, or did anyone else get flashbacks to that Full House episode with the Jesse and baby Michelle montage? Just me? Okay. Anyways, the whole thing was extremely cute and relatable as the eight family members tried to squeeze on one couch together (anyone else with big families knows the struggle). I don't know how they managed to fit, but they made it work. If that wasn't funny enough, while Kourtney Kardashian was trying to make an important — and, I mean, extremely important — announcement to her mother, she kept being interrupted by her daughter Reign, who completely stole the show, even if she was just talking about zombies.

Because her announcement really couldn't wait any longer, Kourtney Kardashian revealed that Kim K had gone to the hospital because her surrogate was in labor!

Kris Jenner was totally shocked! She shouted, "No! What are we doing sitting here? C'mon Ellen, fire up the car!" Oh, how I would love to see that segment. Can you imagine? But honestly, I'm asking the same question as Kris Jenner. What are they doing still sitting there? I would be out of there if I were them!

Kourtney Kardashian also shared that Kim K was supposed to be on the show with her, but because her surrogate had gone into labor, she couldn't be there. While being on Ellen is a big opportunity, I think attending your child's birth is a pretty valid excuse to miss an appearance. We would have forgiven ya, guys!

Watch the whole reveal below:

I think it's safe to say that Kris Jenner will definitely remember this Mother's Day. So, now how many grandkids does she have? Let's see, there's Mason, Penelope, Reign, North, Saint, Chicago, Dream, True, and Stormi — at least I think that's all of them. Oh wait, and the new baby! Kim K hasn't revealed any details about the baby name just yet, but based on her previous name choices, I can guess it will be pretty amazing.

More like this
Kourtney Kardashian & Travis Barker's "Pass The Phone" TikTok Is A Family Tell-All
By Abby Monteil
Michelle Obama's Easter 2021 Instagram With Barack Is A Cute Photo Booth Moment
By Daffany Chan
Why Did Addison Rae Deactivate Her Twitter? Fans Think This Is The Reason
By Brandy Robidoux
Stay up to date