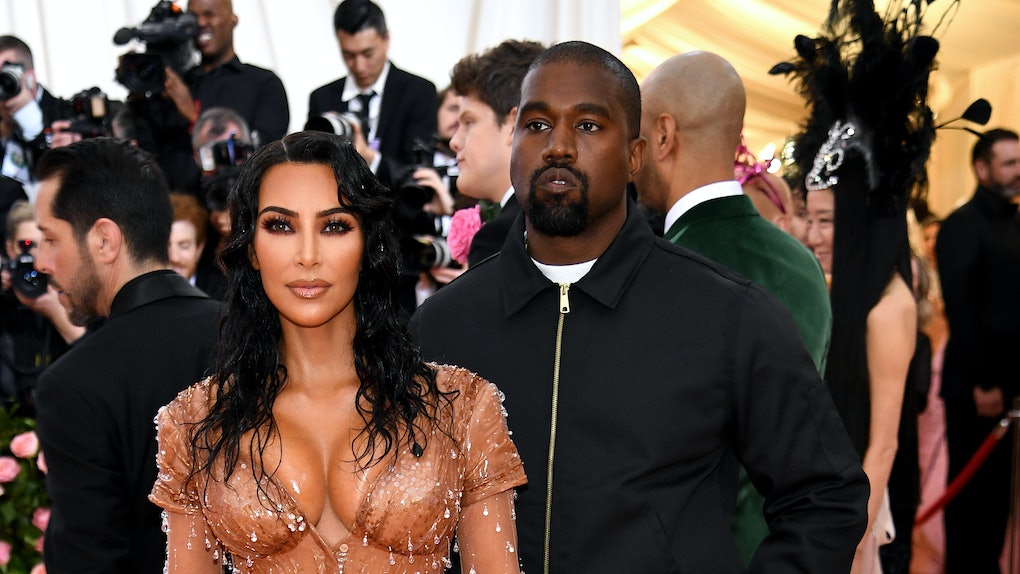 The time has finally come: On Thursday, May 9, reports emerged that Kim Kardashian and Kanye West's surrogate is in labor with their fourth child. Ever since fans found out the Keeping Up With The Kardashians star and the rapper were expecting their second little boy, West Baby Watch has been in full effect. Rumors were floating around that the new baby was coming on Monday, May 6, during the Met Gala, but Kardashian quickly squashed those rumors. So how do fans know the news is legit this time? It came from Auntie Kourtney Kardashian herself.

Elite Daily reached out to Kardashian's team for a comment, but did not hear back by the time of publication.

Let's do a quick rewind. Back in January 2019, the world learned that Kardashian and West were expecting their fourth child, a baby boy, via surrogate. After two difficult pregnancies with their first two children, North, 6, and Saint, 3, the couple decided to use a surrogate to carry their youngest daughter Chicago, who just turned 1 in January.

Shortly after the initial news broke, on Jan. 15, Kardashian confirmed the gender of her baby on Bravo's Watch What Happens Live with Andy Cohen. On the show, Cohen asked her if she had a due date, to which Kardashian coyly responded, "Um... we do, it's sometime soon." Cohen followed up by asking the baby's gender. "It's a boy," she said. "It's out there. I got drunk at our Christmas Eve party, and I told some people, but I can't remember who I told." This also confirmed that there's nothing like a Kardashian Khristmas party to get the secrets flowing!

Most recently Kardashian hosted a CBD-inspired baby shower to celebrate the new baby. In April 2019, Kardashian and guests chilled out with meditation, massages, and a "tea ceremony with crystals." As reported by E!, Kardashian revealed, "I thought it was kind of ridiculous to have a fourth baby shower. But I thought I'm freaking the f--k out having a fourth kid. So, because I'm freaking out and the baby is coming in, like, two weeks, I thought what better way to celebrate than to have a little CBD." Totally fair, and totally chill.

And now the time has come. During a taping of The Ellen Show, which will premiere on Friday, May 10, Kris Jenner was surprised by six of her grandkids along with Kourtney. Mason, Penelope, Reign, North, Saint, and Chicago all squeezed onto Ellen's couch beside Kourtney and their "Lovey."

After asking each kid to say their name (truly the cutest thing you'll see today), Ellen asked where Kim was, and Kourtney officially dropped the baby boy bomb: "Kim was supposed to be here, but... My mom doesn't even know this, but Kim's surrogate went into labor. So she's at the hospital."

Check out the adorable video below:

There are likely only a few hours left before the fourth Baby West is here, so the world better start emotionally preparing. Fans have first pictures and the name to look forward to, so have your alerts set and stay vigilant.