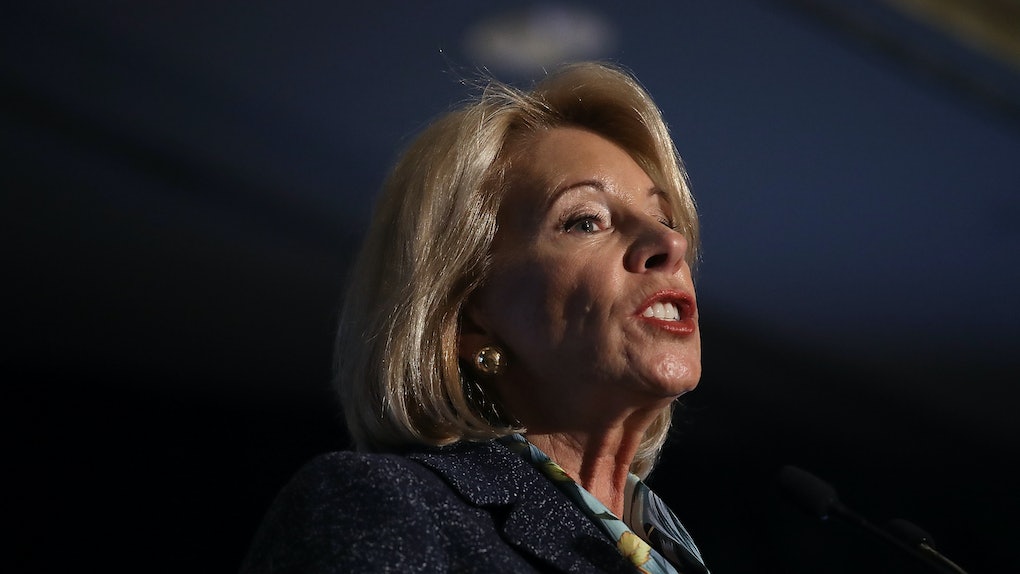 Saturday Night Live (SNL) would not be Saturday Night Live without its iconic spoofs of political figures. So it was fair game when, on March 17, United States Secretary of Education Betsy DeVos became the show's target. During SNL's Weekend Update, Kate McKinnon performed a spot-on impression of DeVos, mocking the government official's heavily-criticized 60 Minutes interview, in which she stumbled to answer basic questions related to education in our country. In fact, the video of Kate McKinnon as Betsy Devos on SNL showcases exactly what's been on everyone's minds since the cringeworthy March 11 interview.

First off, aside from quasi-perfect responses McKinnon gave on the segment, can we just talk about how much she actually looked like DeVos? The actress wore the exact outfit that DeVos wore during her 60 Minutes interview, sporting a plain white blouse, jewelry beads, dangling earrings, and she topped it off with the official's signature blond haircut. If there wasn't such an age difference and you looked really quickly, I honestly don't know if you'd be able to tell them apart.

But the real fun happened once Colin Jost started to interview McKinnon. When Jost questioned her character on why she's "the most-protested member of Trump's cabinet," she replied, "I think it's because I don't do a good job and I can't because I don't know how." She then shared that she was aiming to ensure "all schools are safe learning environments for guns," ABC News reported. She added, "I may not be good on camera, but behind the scenes my ideas are much worse."

After the widely-criticized March 11 interview, where DeVos discussed all things related to education with veteran journalist Lesley Stahl, the government official took to her Twitter page to write that 60 Minutes didn't show everything she shared during the interview, including school statistics. She wrote, "Scores are stagnant. Students need more options, and we must rethink our approach to education."

However, she failed to come up with said approach during the actual interview.

Though the highly unfavorable secretary appeared on the show to discuss school safety, gun control, the current state of the public school system, and more, her answers were actually all over the place. DeVos awkwardly claimed that “we should be funding and investing in students, not in school — school buildings, not in institutions, not in systems." And at one point, after she was asked if she'd spent time at under-performing K-12 institutions, DeVos admitted that she hadn't. She revealed, “I have not intentionally visited schools that are under-performing," The Atlantic reported.

Like the SNL skit, Stahl actually asked DeVos why she's become "the most hated Cabinet secretary," to which she responded, "I'm not so sure exactly how that happened. But I think there are a lot of really powerful forces allied against change." She then admitted that the criticisms hurt her at times, but claimed that she's "more misunderstood than anything," according to CBS News.

On March 7, DeVos traveled to Parkland, Florida to visit Marjory Stoneman Douglas high school, the site of the Feb. 14 mass shooting that left more than a dozen people dead. She was expected to answer various questions surrounding the tragedy, such as school safety, but many criticized her for not answering any of their questions and cutting her press conference short. One student of the school wrote:

Secretary of education Betsy Devos spoke to me and only a hand full of students. She did not properly answer my only question. She did not sit down with any students and asked what we wanted. Douglas has 3,000 students. None of them were invited.

Though DeVos has failed to give concrete answers on a multitude of different subjects, I can at least have a little solace in the fact that McKinnon might have said everything she can't stand to muster.