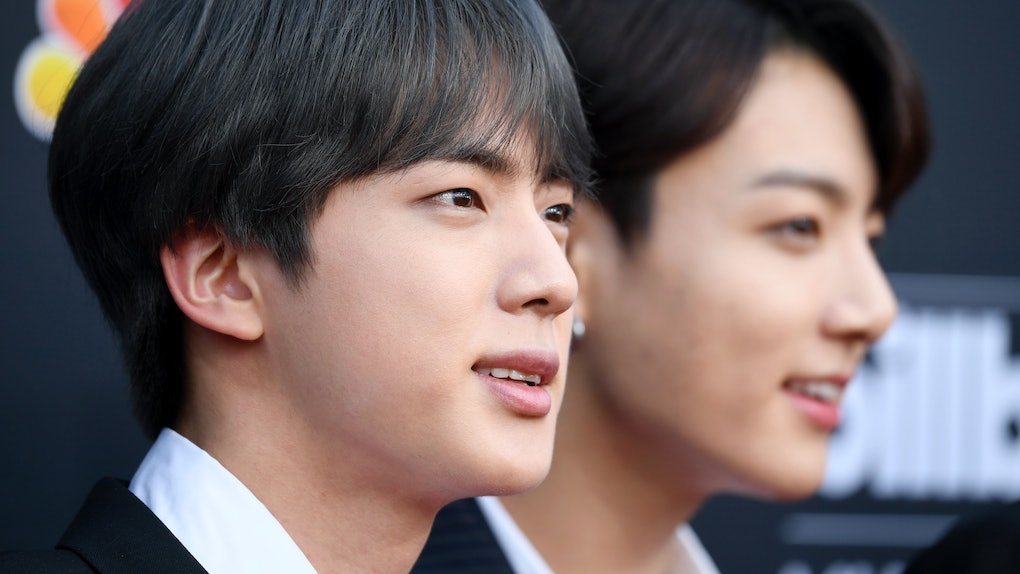 We already know BTS is into playing a little football during their Love Yourself: Speak Yourself world tour. Remember back on May 12 when Jungkook scored a touchdown on stage at Chicago's Soldier Field? Well, another member of BTS decided to suit up for the game a week later — only this time, the RB didn't quite make it into the end zone. Have you seen the video of Jin playing football with BTS at their concert at MetLife Stadium in East Rutherford, New Jersey? It's totally priceless, y'all! The boys basically tackled Jin right from the get-go, then they all ended up sharing a seriously precious group hug because that's how they roll. And, like, can I get in on that next time?

The seven-member crew — Jungkook, Jin, V, RM, Suga, J-Hope, and Jimin — was in the Garden State for the final U.S. stop on their Love Yourself: Speak Yourself world tour. Maybe it was the fact that they were playing at the home of not one but two National Football League franchises — the New York Giants and the New York Jets — that had the boys in a football state of mind. But Jin decided to go for a touchdown on stage, just like Jungkook did a week earlier. JK had no problem making it across the "field," if you'll recall. But Jin was taken down by his musical brothers fairly quickly, and a massive hugfest ensued. The whole thing was just so adorable and ARMY seriously cannot handle it.

And yes, there's video. So let's take a look:

Still... is that not the cutest thing you've ever seen? Let's re-live this precious moment for a sec, OK?

First V addressed the crowd. "Who is the running back for tonight?" he asked, and I have to wonder if the audience was, like, looking around and waiting for Saquon Barkley to roll up.

He then started running across the stage with a balled up face towel in his arms — or at least he attempted to run across the stage. I mean, unlike Jungkook, Jin didn't get very far. After about three steps, he basically got blitzed as his bandmates surrounded him and enveloped him in a hug.

Let's take another look, because the smiles on all of their faces pretty much say it all. I just love the way these guys interact with each other so much and I legit can't get enough of this moment:

And how did Jin feel about getting blocked? You'll live for his reaction, which was to yell at each one of his bandmates, "You, and you, and you, you, you: SO BAD BOY!"

I felt that in my soul, y'all!

So good, right? And as you'd expected, ARMY took to Twitter to share their thoughts on the whole football/group hug situation.

Now, just for comparison's sake, let's take a look at Jungkook's football skills, which were on full display in Chicago on May 12:

What do you guys think — did BTS let Jungkook score because he's the baby of the group? Or is there just literally nothing this kid can't do?

Probably a little bit of both.

More like this
Here's Why EXO's BAEKHYUN, CHANGMO, & Raiden's "Runner" Is The Perfect T1 Theme Song – EXCLUSIVE
By Michele Mendez
Prince Philip, The Duke of Edinburgh, Has Died At The Age Of 99
By Noelle Devoe
Rosé From BLACKPINK's "Gone" Music Video Is The Ultimate Sad-Girl Aesthetic
By Abby Monteil
Stay up to date