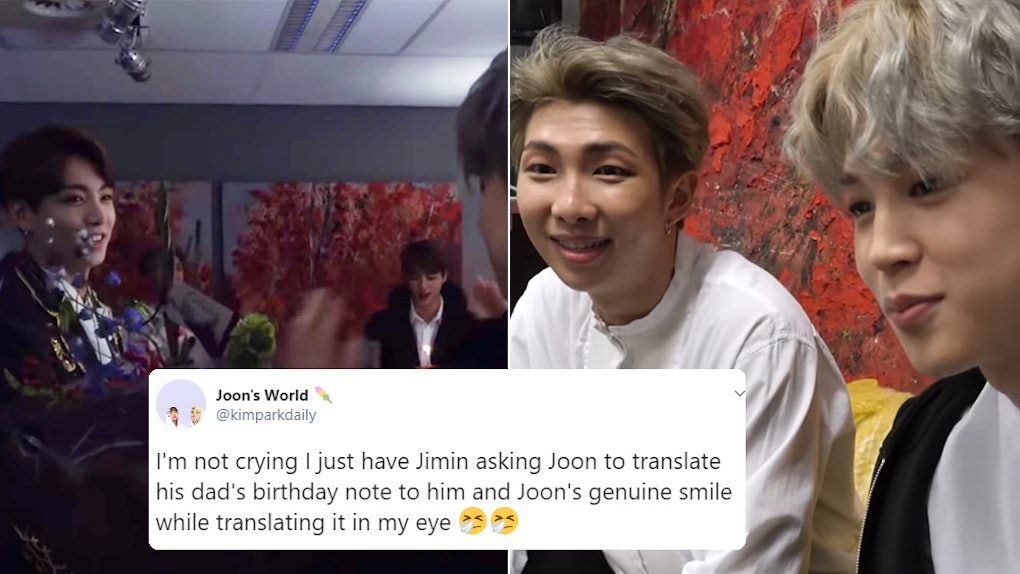 BTS is just the cutest group of guys. You know how I know that? Because of the video of BTS surprising Jimin for his birthday. That's how. BTS just dropped a new Bangtan Bomb that shows the group surprising Jimin with a birthday cake, flowers sent by his father, and a special, harmonious rendition of them sining "Happy Birthday" in Korean. Ugh, the love between these boys.

Jimin turned 23 on Oct. 13. 2018. The group was on the Love Yourself tour during that time (they still are currently), so they took some time out of their stop in Amsterdam on Jimin's big day to wish their buddy a happy birthday.

In the video, you see Jimin's subtle but sweet reaction to the birthday surprise from his groupmates. They also hand him a bouquet of flowers that were apparently sent from his father. In the video, the guys make note that Jimin's father had contacted a 24-hour flower service in Amsterdam to coordinate the flowers for his son. It had the now-iconic note from his father written in English. Jimin famously mentioned that he couldn't read it and needed RM to translate it in his birthday V-Live.

Well, we got to watch the moment Jimin asked RM to translate the note from his father and it was all sorts of cute!

This video is just the cutest (English subtitles included).

Fans can't get over the cake in the video, or the fact that Jin was delivering it to the birthday boy for the third year in a row. I mean, look how gorg it is! This is art!

The boys joked in the video that the cake looked fake, but don't worry. No one has been bamboozled here. The cake was real. (Which is good, considering Jimin started snacking on it pretty quickly.)

What fans really can't get over in this video, however, is the clear love between all of the boys.

And don't even get them started on the card from Jimin's father.

According to fans on Twitter, this has become a yearly birthday tradition since BTS got together. The cuteness.

BTS always produces the sweetest moments for their fans. V coined this one phrase that BTS and fans now say to each other as a term of endearment: "Borahae." The phrase means "I purple you," and it's a phrase the boys now use to say, "I love you."

Seemingly in honor of the "borahae" phrase, Jimin dyed his hair purple for the Seoul Music Awards that went down on Tuesday, Jan. 15.

When BTS took the stage to accept one of the awards at the SMAs on Jan. 15, Jimin walked up to the mic, pointed to his purple hair, and said, "Army... Borahae!" Cue ARMY everywhere freaking out. Hear that, ARMY?! He purples you! And his hair shows it!

This birthday video is just another addition to the pantheon of heckin' adorable BTS moments. We stan.

More like this
Rosé From BLACKPINK's "Gone" Music Video Is The Ultimate Sad-Girl Aesthetic
By Abby Monteil
These Tweets Comparing SuperM's "We Do" To BTS' "Dynamite" Video Are So Split
By Michele Mendez
What Does Taylor Swift's Vault Door Video Mean? Fans Are Decoding It
By Cianna Garrison
Stay up to date