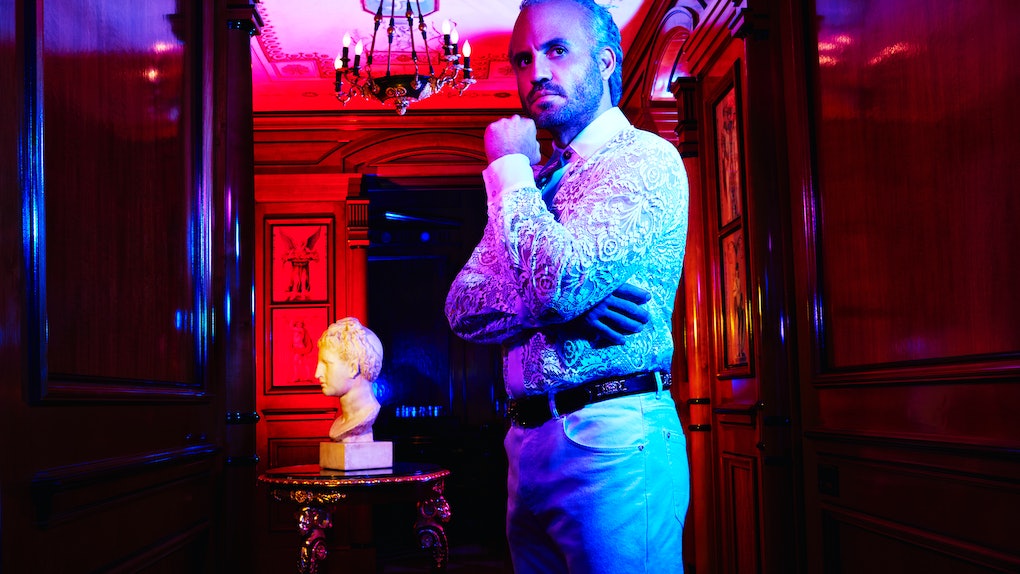 Ryan Murphy is no stranger to controversy. During his years with Glee, he got into fights with artists who refused to allow their songs to be covered by the show. His American Horror Story series has needed last minute edits when mass shootings have made his TV violence a little too close to home. But he's never dealt with anything quite like what's happening ahead of the release of The Assassination of Gianni Versace: American Crime Story. The Versace family's reaction to American Crime Story has been swift and unequivocal. They've seen what the show had done with the story of the late Gianni, founder of the fashion house that bears his name, and They. Do. Not. Approve.

With the show coming next Wednesday, Jan. 17, the Versace family's campaign against the series began in earnest this past Monday, Jan. 8. They put out a statement saying that the show was a work of fiction, that they had not consented to this series being made, and it should be considered unauthorized as well as factually incorrect.

By the end of the day, FX had shot back.

Like the original American Crime Story series The People Vs OJ Simpson, which was based on Jeffrey Toobin’s non-fiction bestseller The Run of His Life, FX’s follow-up The Assassination Of Gianni Versace is based on Maureen Orth’s heavily researched and authenticated non-fiction best seller Vulgar Favors which examined the true life crime spree of Andrew Cunanan. We stand by the meticulous reporting of Ms. Orth.

On Tuesday, Jan 9, Ryan Murphy himself went on record, telling Entertainment Weekly it was not a work of fiction.

The Versace family is not having it. As one of the major brands in the fashion world, with serious clout on both the New York runway scene and the red carpet, they were having the last word. On Wednesday, Jan. 10, they put out a much longer, far more detailed statement, making it clear what they found offensive.

As we have said, the Versace family has neither authorized nor had any involvement whatsoever in the forthcoming TV series about the death of Mr. Gianni Versace, which should only be considered as a work of fiction... The company producing the series claims it is relying on a book by Maureen Orth, but the Orth book itself is full of gossip and speculation. Orth never received any information from the Versace family and she has no basis to make claims about the intimate personal life of Gianni Versace or other family members. Instead, in her effort to create a sensational story, she presents second-hand hearsay that is full of contradictions.

As just one example, Orth makes assertions about Gianni Versace’s medical condition based on a person who claims he reviewed a post-mortem test result, but she admits it would have been illegal for the person to have reviewed the report in the first place (if it existed at all). In making her lurid claims, she ignores contrary information provided by members of Mr. Versace’s family, who lived and worked closely with him and were in the best position to know the facts of his life.

Gianni Versace was a brave and honest man, who engaged in humanitarian work for the benefit of others. Of all the possible portrayals of his life and legacy, it is sad and reprehensible that the producers have chosen to present the distorted and bogus version created by Maureen Orth.

The Versace family will issue no further comment on the matter.

For those who can't read between the lines, the euphemism "medical condition" that the Versace family is referring to is HIV. The book on which this is all based, Vulgar Favors by Orth, claims that Gianni Versace was found to be HIV positive during the autopsy. The show works that in by showing their lead character going to the doctor for this condition at one point early in the series.

More like this
Here's How To Vote For The Next 'American Horror Story' Theme Among 6 Options
By Cianna Garrison
In 'Riverdale' Season 5, Toni Topaz Is The Black Superwoman Without A Cape
By Erika Hardison
This Reported Update About HBO Max's 2021 'Friends' Reunion Is Great News
By Cianna Garrison
Stay up to date