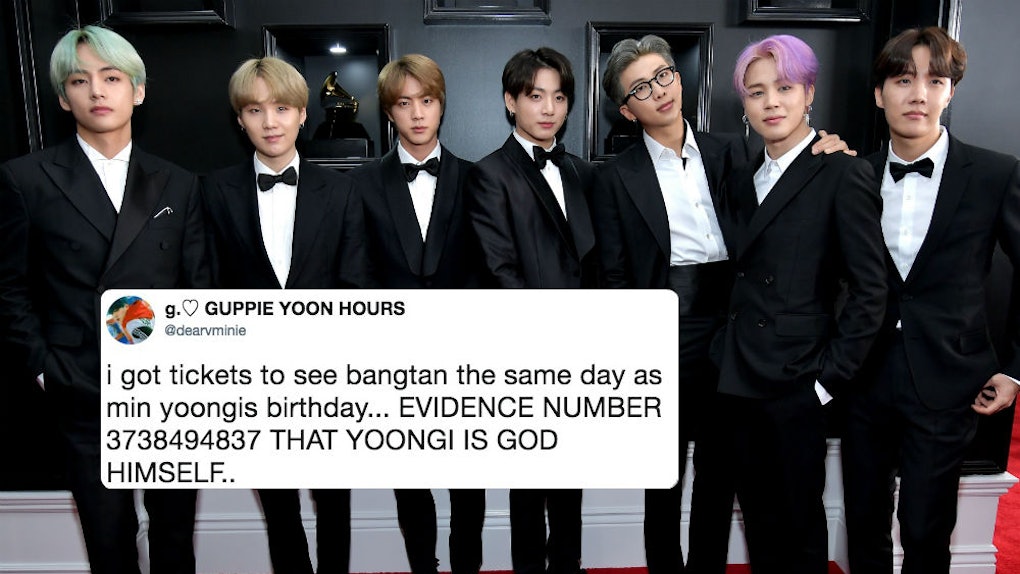 All right, BTS ARMY. You OK? On Friday, March 8, at 4 P.M., the second round of BTS’ Love Yourself: Speak Yourself tour tickets went on sale. Pretty much every BTS fan with some money to spare has been scrambling to snag a ticket while they still can. Needless to say, the frenzy over tickets sales has trickled onto social media because everyone is literally going wild at the prospect of seeing BTS live. Everyone’s tweets about BTS' second round of Speak Yourself tour tickets will give you an idea of just how in-demand these tickets are.

The first round of tickets for the Speak Yourself sold out so fast that the guys decided they needed to add a second round of tour dates for cities around the world. And thank goodness they did because tickets went super fast the first time around. But that's not really surprising, because that’s how ridiculously popular BTS is. The guys have international appeal and that means everyone wants a slice of that BTS pie. Well, many fans are going to get theirs because the second round of the Love Yourself: Speak Yourself tour added a second night in L.A., Chicago, Illinois, and East Rutherford, New Jersey in the U.S., as well as another night in Paris, France and at Wembley stadium in London, England.

Obviously, everyone is trying to snag tickets at their venue of choice and all those same people are stressing big time about all this on Twitter. Because, honestly, the process isn't easy. Although there are cumulatively hundreds of thousands of seats spread across the stadiums that BTS will play on their Speak Yourself tour, there still aren't enough seats to meet the demand, which means fans have to wait in virtual queue's behind thousands and thousands of other fans in hopes that they'll be lucky enough to get tickets. Fans couldn't help but air their frustration with the process on Twitter:

Some fans just got in the queue to help other fans:

As for the fans who were lucky enough to get through the queue and get tickets already, they’re tweeting a lot as well, from expressing sheer joy over the fact that they'll be seeing BTS on tour, to sharing tips with other fans still fighting for tickets. Take a look:

And, of course, there are some fans who missed the boat altogether and won’t be seeing BTS this time around.

As of 5:56 P.M. on March 8, BTS' website says that the second nights of the Speak Yourself tour in Paris and London have both sold out. Tickets in Chicago, Illinois and East Rutherford, New Jersey are also going extremely fast:

Don't give up hope just yet. Hurry up and get in the queue if you're not in there yet because you still have a chance! May the odds be ever in your favor, BTS ARMY — forever and always!

More like this
These Tweets About Beyoncé On Netflix's 'Selena: The Series' Are Too Much
By Dylan Kickham
Is Olivia Rodrigo's "Good 4 U" About Joshua Bassett? Fans Are Convinced
By Michele Mendez
Here's How To Stream The 2021 Lotte Duty Free Concert, & Catch BTS & TWICE's Performances
By Michele Mendez
Stay up to date