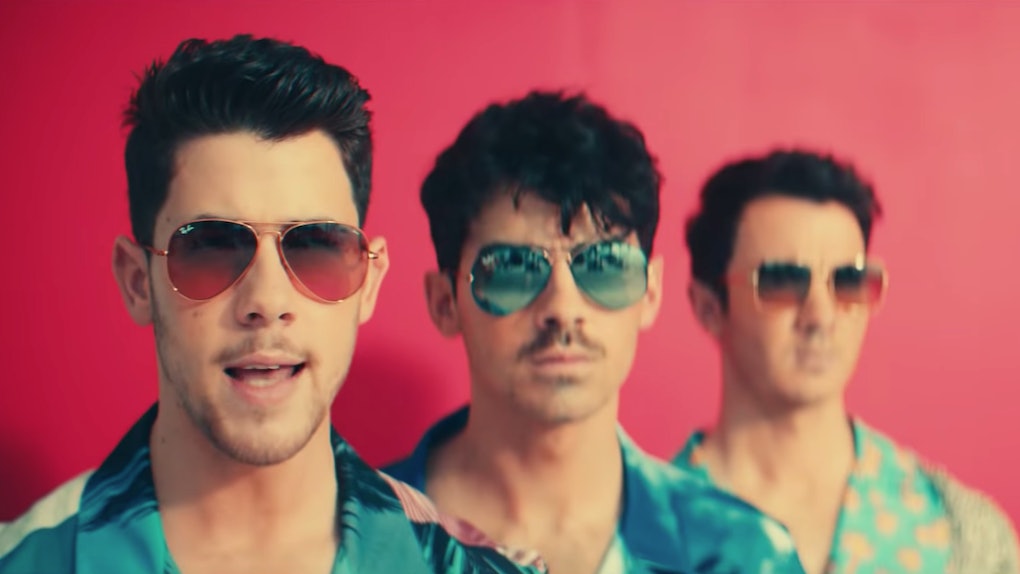 I don't know about you, but it feels like the Jonas brothers calling their new song "Cool" is a bold move. The pressure! The expectation! The title to literally live up to! Of course, Nick, Kevin, and Joe's fans are thrilled the gang is back together — they could probably have written a song called "Boring" and fans would still eat it up. Fortunately, this music video lived up to the hype. The tweets about the Jonas Brother's "Cool" music video show fans absolutely love the old school vibe. The boys are back.

Even the most critical fan has to admit the Jonas Brothers are kind of having a moment. It feels like they road the momentum stirred up by Nick's marriage to Priyanka Chopra all the way to the recording studio. Shortly after the world watched in wonder as Jonas and Chopra tied the knot in a stunning two-part ceremony and multi-day event, the group announced they were, in fact, getting back together.

Here's the thing I didn't personally know about the Jonas brothers: they don't take themselves too seriously. As a sort of exterior rim-level fan, I thought with all of the moody eyes, leather jackets, and hair gel that they took themselves super seriously. It turns out, they have a total sense of humor about fame, music, and Hollywood in general.

Fans suspected they might be infusing these playful elements into the "Cool" music video when photos popped up of Kevin and Nick on a beach. In the pictures, Kevin was sporting a boating captain's suit complete with a real-life parrot accessory. Nick rocked some neon orange shorts that could resemble a lifeguard uniform, but was not as noteworthy considering his style is always bold.

Turns out, this was the set for the "Cool" music video.

In the video, we see the boys looking totally extra. At one point, Nick is walking through the streets in a vintage suit with a dozen women following him. At another point, the boys are performing for a group of older women at what seems to be a community pool. It all sounds so nuts, but fans are completely eating it up.

And the song itself is a bop. Some of the lyrics go:

Woke up feelin' like a new James Dean, I comb my hair like an old school sheen. I'm feelin' high like a late night summer of last year. Standin' there with the red dress on ya, a Killer Queen like a young Jane Fonda. Is it me or am I just havin' a good year?

While you might love to hate or hate to love the "Cool" music video, you have to admit, the brother's prequel revival hit "Sucker" is fun AF. I didn't know what to expect with the first single out of the reunion gate, but the fact that the guys featured their fierce partners and gave them maybe the most fun costumes I've ever seen did a lot for me.

More where all of this came from, guys. The playful attitude/committed relationship/"let's just have some fun"-vibe looks really good on you.