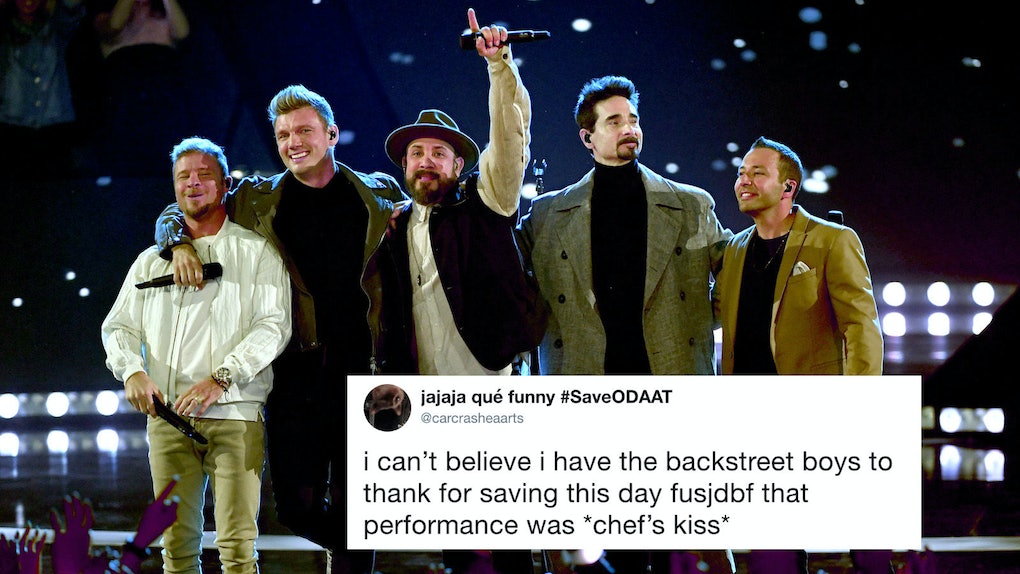 In case you have't heard, Backstreet is back, and we are most definitely alright with that. The iconic boy band took to the stage at the iHeartRadio Music Awards on Thursday night, March 14, to give fans a taste of their new sound as well as a nostalgic throwback that transported everyone back to high school. Of course, Twitter exploded with fans celebrating the comeback performance. These tweets about the Backstreet Boys 2019 iHeartRadio Music Awards performance prove it was one of the biggest performances of the night.

Halfway through the iHeartMusic Awards ceremony on Thursday night, the Backstreet Boys took to the stage to give an energetic performance that was a little bit of old and a little bit of new. The boy band's five members — AJ McLean, Howie Dorough, Nick Carter, Kevin Richardson, and Brian Littrell — started out scattered among the audience, and made their way on stage while crooning their latest single "No Place." The reunited boy band released the emotional pop ballad "No Place" at the beginning of 2019 as the third single from their recent album DNA. And it is clear why the song was chosen as a single, as the crowd swayed along to the sweet and catchy love song.

But the crowd really got going when the Backstreet Boys switched things up for their second song, performing their iconic 1999 hit "I Want It That Way." The group even hit us with some tight, boy-band choreography during the performance, and reminded everyone of what we loved about the boy-band era of the '90s and 2000s. Check out all of the loving responses to the Backstreet Boys' throwback iHeartRadio Music Awards performance below:

And the best news for Backstreet Boys fans is that their iHeart performance is not just a one-time comeback performance. The boy band may have been the biggest in the late '90s thanks to massive hit pop songs like "I Want It That Way," "Everybody (Backstreet's Back)," "Quit Playing Games (with My Heart)," and many more, but the group is still putting out new pop songs. Despite a brief hiatus in the early and mid-2000s, the boy band has been together and putting out new music since 2005's aptly titled Never Gone.

Most recently, the Backstreet Boys released their ninth studio album DNA at the end of January. The new album has already spawned singles "Don't Go Breaking My Heart," "Chances," and of course, "No Place," which they performed at the ceremony.

And if you loved that live performance on the iHeartRadio Music awards, then you should know that you can see the Backstreet Boys live again very soon. The group is set to kick off their DNA World Tour next month. The boy band is going all over the U.S., Europe, and Canada for the rest of 2019, so you should be able to find somewhere to live your best nostalgic, '90s life no matter wherever you are. Check out the tour dates on the Backstreet Boys website.