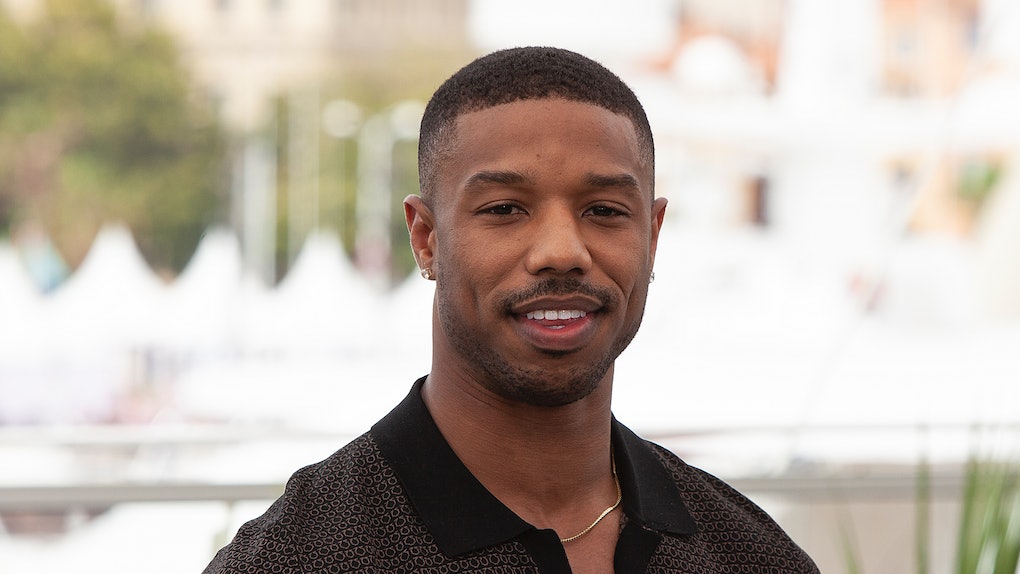 The Tweets About Michael B. Jordan's Thirst Trap Voting Reminder Are A Mood

Michael B. Jordan is making his voice heard. The Black Panther actor is no stranger to activism, but it seems he's found a new way to get people's attention. On Oct. 13, Jordan posted a super steamy thirst trap, and its racking up some major retweets. Be prepared, because the tweets about Michael B. Jordan's thirst trap voting reminder are just as steamy as his initial post.

Ahead of the 2020 U.S. Presidential election, a number of celebrities have spoken out about the importance of voting, but Jordan's was definitely one of the more creative posts. The actor took the photo shirtless while simultaneously biting his lip. "Vote early," he urged his followers.

Jordan may have taken a page out of Diplo's book with his latest voting message. On Sept. 21, Diplo pulled a similar move when encouraging his followers to vote. He posted an Instagram pic that showed him standing stark naked in front of a lake, simply captioning it, "Don't forget to register to vote."

Either way, Jordan definitely had success with his thirst trap, and fans can't stop talking about it. "Say less king I’m headed that way anyway," one fan tweeted in reply to Jordan's message.

"No way you actually hit tweet on this," another fan tweeted.

Basically, fans melted into a puddle.

Other stars to speak out about the upcoming election include Snoop Dogg, Pharrell, Demi Lovato, and more. "This is the most important election of our lifetimes and it's my first time voting. We need every single American to get out there and vote," Snoog Dogg said. “It's time for ya’ll to drop those ballots like they're hot — in your local drop box. Vote early and let ‘em know our voices will be heard"

Meanwhile, Pharrell shared a quote from John Lewis to Instagram which read, "The VOTE is the most powerful nonviolent tool we have."

It seems like most celebrities are getting involved with the election this year. Some are simply getting a little more, ahem, creative with their posts.

More like this
These Tweets About BTS' "Film Out" Video Are Filled With So Many Questions & Theories
By Michele Mendez
Olivia Rodrigo's Reaction To Getting Her First Parking Ticket Was Priceless
By Brandy Robidoux
Is Taylor Swift's "Mr. Perfectly Fine" About Joe Jonas? Sophie Turner's Instagram Has Fans Curious
By Brandy Robidoux
Stay up to date